India and Australia will clash in the decider at The Gabba from the 15th of January. After the low of 1947, there have been some memorable individual performances over the decades by Indian players in Brisbane. From Jaisimha's hundred in 1968 to Ganguly's 144 in 2003, we look at some standout performances by Indians at The Gabba.

India and Australia will clash in the decider at The Gabba from the 15th of January. It has been an extraordinary series with the momentum shifting from one team to the other. India bounced back from the horror of ’36 All-Out’ in Adelaide to register a thumping win in the Boxing Day Test at the MCG. They then put up one of the great resilient and defiant performances in Test cricket history to save the SCG Test against all odds, battling injuries, banter, off-field controversies and a great Australian bowling attack. What that also meant was that both teams got to The Gabba, which has been Australia’s fortress for over three decades, at 1-1, with the series, pride, reputation – all at stake.

Australia has not lost a Test at The Gabba since 1988. They have the best win-loss ratio for any home venue in Brisbane. India, on the other hand have never won at The Gabba. They have lost 5 and drawn one of the six Tests they have played at the venue. It is the only Australian ground (barring the new Perth Stadium where India has played just one Test) where India has not won a single Test match.

However, after the low of 1947, there have been some memorable individual performances over the decades by Indian players in Brisbane. We look at some interesting numbers over the years for India from The Gabba.

India vs Australia: Can India Breach Fortress Gabba, Where Australia Are Undefeated for Over 32 Years?
1947 – 58 & 98: The Lowest Match Aggregate For India against Australia

India, led by the great Lala Amarnath were bundled for 58 and 98 by Don Bradman’s Australia in what was the first ever Test between the two nations. Bradman scored a big hundred in the first innings while the left-arm medium-pacer, Ernie Toshack bagged 11 wickets in the match to rout India for their lowest match aggregate (when both the innings have been completed) against Australia in Test cricket. 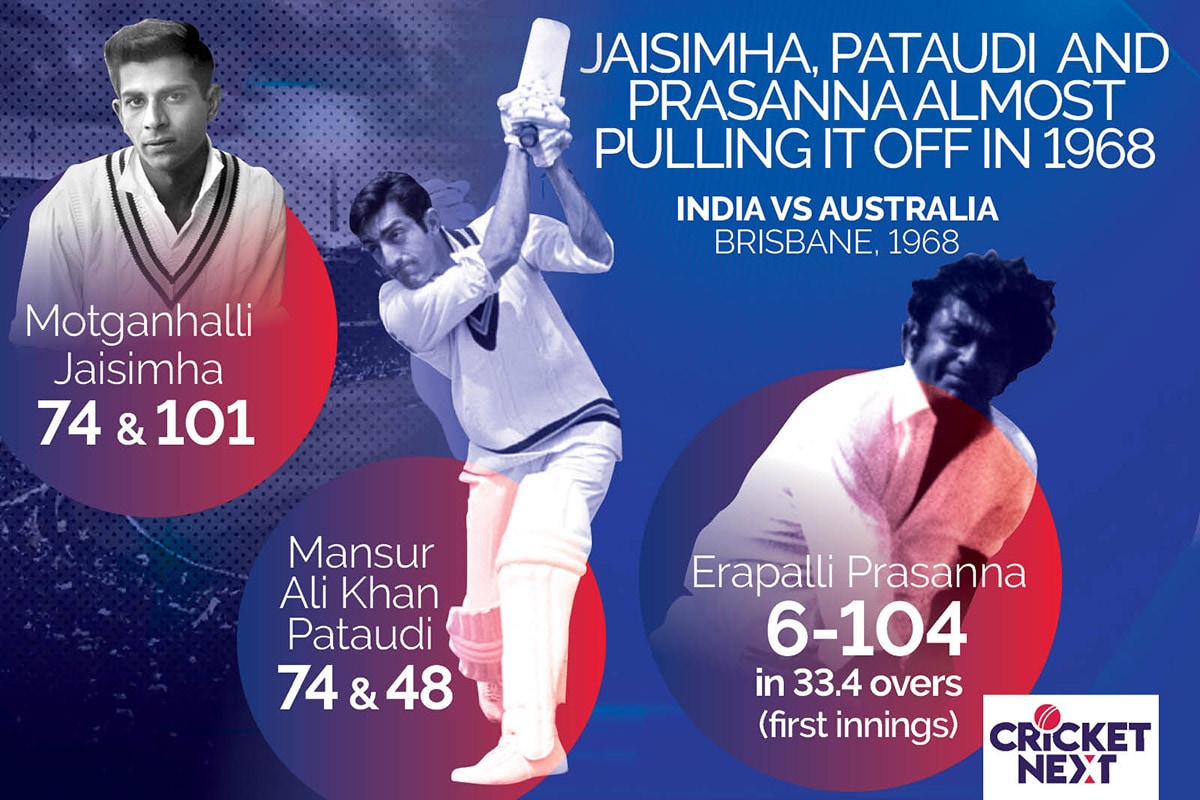 1968 – The First Hundred and the First Fifer: Jaisimha and Prasanna On the Honours Board & India Give Australia A Big Scare

Skipper Mansur Ali Khan Pataudi and Motganhalli Jaisimha led India’s fight back in the first innings both registering 74. But India still fell 100 runs short of the Australian total. The great off-spinner, Erapalli Prasanna then bagged six wickets to bowl out Australia for 294. His 6-104 in 33.4 overs are the best bowling figures by an Indian at The Gabba.

India, chasing 395, were in big trouble at 61 for 3 when Rusi Suri and Tiger Pataudi took control of the proceedings, resurrected the innings and put together 93 for the fourth wicket. Walked in Jaisimha and along with Chandu Borde stitched a potentially match-changing century partnership for the sixth-wicket. However, the fall of Borde with the team score at 310 triggered a collapse. India were bowled out for 355 and went down by 39 runs but not before giving a big scare to the Australians. Jaisimha was the last man dismissed but not before he had registered a brilliant 101. Chasing an improbable 341 against a Packer-hit Australian XI in 1977, Sunil Gavaskar (113) with supporting contributions from Mohinder Amarnath (47), Gundappa Viswanath (35) and Syed Kirmani (55) almost pulled off an impossible chase in Brisbane. Gavaskar was the sixth Indian wicket to fall at the score of 243. Kirmani and captain, Bishan Singh Bedi (26 off 30 balls) carried the Indian fight but ultimately the visitors fell just short and were bowled out for 324. Bedi (5-55 in the first innings) and Madan Lal (5-72 in the second innings) were the two standout bowlers for India in the match.

It was the first Test on India’s tour Down Under in 2003-04 against a world-beating Australian side captained by the great Steve Waugh. India, in reply to Australia’s 323, were in trouble at 62 for 3 in the first innings when skipper Sourav Ganguly took stock of the situation. In what was one of the best counter-attacking innings by a visiting batsman in Australia, the Indian captain hammered a brilliant 144 off just 196 deliveries smashing 18 fours and gave India a rare lead. India ended with 409 – it remains their highest score at the venue. VVS Laxman chipped in with 75. Earlier in the match, Zaheer Khan returned with 5-95 in 23 overs – which included the wickets of Ponting, Hayden, Katich, Steve Waugh and Gilchrist to bring India back into the match after the home team had got off to a flying start. Australia lost their last 8 wickets for just 55 runs! 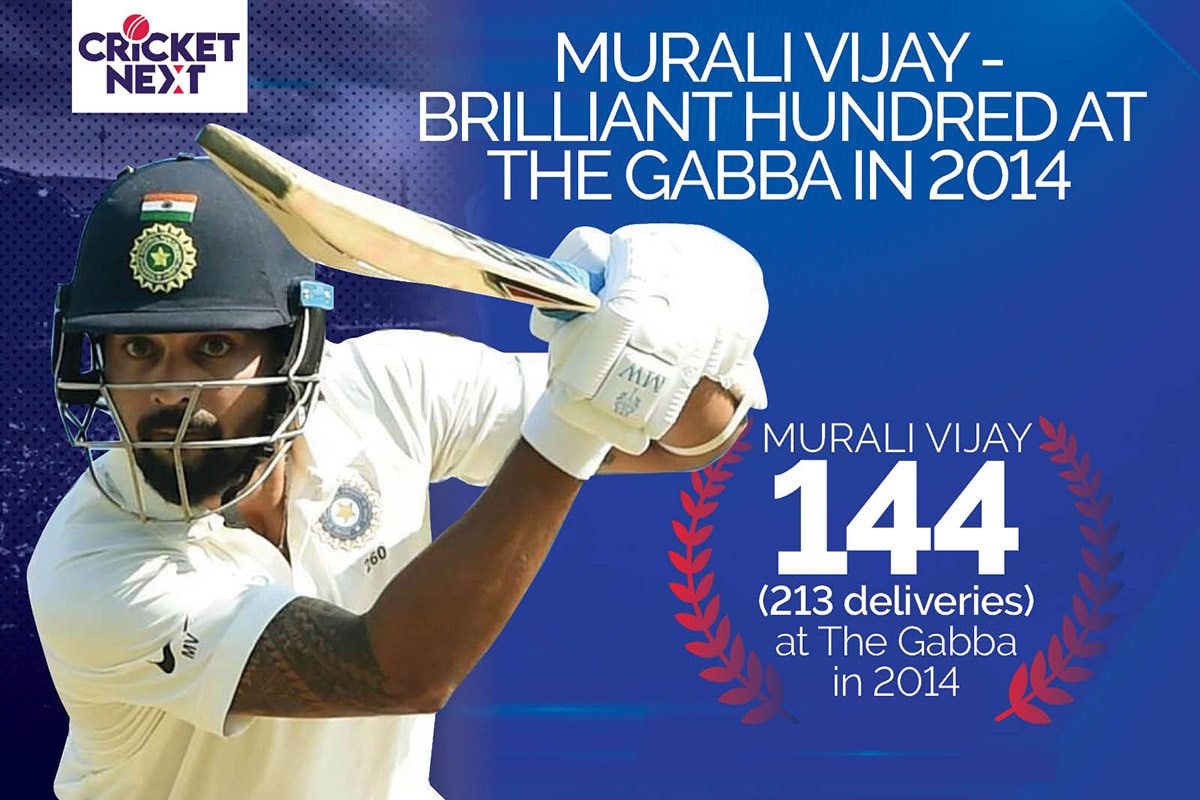 Murali Vijay recorded an aggressive 144 off 213 deliveries opening the innings for India in the second Test at The Gabba in 2014. Coupled with 81 from Ajinkya Rahane, India crossed 400 for only the second time in Brisbane. There was some late drama in the Test as Australia made heavy weather of the target of 128 but eventually crossed the line with 4 wickets in hand.