India A tour could be make-or-break for Rohit Sharma

It's been more than six years since he made his ODI debut, and its high time Rohit Sharma forced his way into India's Test team. 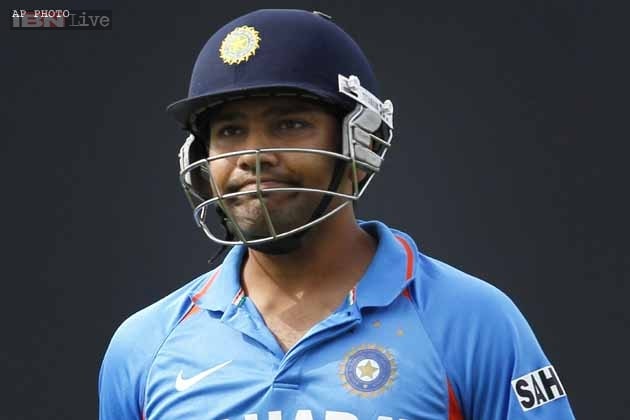 Few Indian cricketers have polarised the fans like Sourav Ganguly, but the way his international career graph has shaped and the way its heading, Rohit Sharma could come close. He has played more ODIs than any other India batsman without facing the red ball at international level, 102 to be precise, in more than six years.

He plays the cover drive with lazy elegance. He presses the ball between mid-on and the stumps with about as much effort as you would flip a light switch. He seems to have a lot of time to play the cut. But he also infuriates. Consistently. When he gets out poking to slip, pushing to cover or lofting to mid-off, Rohit often looks disgusted with himself for having given it away. Pundits, players and fans know about the talent; its the patchy returns that leave everyone shaking their heads.

Rohit is 25. He is a batsman with arguably more talent than any of Virat Kohli, Cheteshwar Pujara, Suresh Raina, Shikhar Dhawan and Ajinkya Rahane, but the problem is temperament. In those 102 ODIs he has crossed 50 just 20 times and converted only two centuries. In those matches he has 24 single-digit dismissals, 14 scores in the 20s, and six scores in the 30s. Without a doubt this has hampered his chances of breaking into India's Test team.

Its not that he hasn't come close. Rohit narrowly lost out on a chance to make his debut against South Africa at Nagpur in 2010 due to a freak injury just before the toss while playing football. And now, after a string of good ODI performances in his latest avatar as opener in ODIs, Rohit is part of the India A squad in South Africa for limited-overs and two unofficial Tests. Barring the times he has been in India's Test squad, this is the closest Rohit has been to finally getting a that elusive cap.

Rohit has been around in international cricket for over six years, and must be ready to make the transition to Test cricket. Indian cricket needs to know if he has cut it at Test level, and for that he needs to be given a run.

At the juncture he now finds himself at, Rohit needs big first-class scores to boost his immediate future as a Test cricketer. Runs in South Africa will count for a lot. Kyle Abbott and Marchant de Lange are no Dale Steyn or Morne Morkel, but each owns a seven-wicket haul in a Test innings. Olympia Park in Rustenberg and Pretoria's LC de Villiers Oval are probably not as testing venues as Durban, Cape Town and Johannesburg - where India will play Tests either side of the New Year - but succeeding at those venues in the next couple weeks could pitchfork Rohit ahead in the stakes for a middle-order berth. He must acclimatise, assess the conditions, ride the bounce, bat out sessions. He must bat big.

As former India opener turned analyst Aakash Chopra told this writer once, there is no question about Rohit's talent. "He has all the shots in the book and importantly a lot of time to play them. With him, it's all about how he plays his game," said Chopra. "It's about his temperament and attitude. He has too often got out after playing pretty 20s and 30s. He should have forced his way into the Test team by now. Nobody can help Rohit but himself."

Pujara, captaining India A on tour, is India's first choice for the one-down spot. Ditto for Kohli at No. 5. That leaves just the No. 6 spot open, and with it the reserve middle-order batsman's slot. This has been the case since the great polariser of opinions, Ganguly, retired in 2008. Ganguly ducked no challenges, and its high time Rohit grabbed the spot vacated by the former left-hand batsman.

This tour is massive for Rohit. After South Africa, India have tours of New Zealand, England and Australia line up in 2014. He must score heavily for India A. Its as simple as that. If he fails, and the likes of Rahane and Ambati Rayudu succeed, Rohit could find himself shoved further behind in the pecking order, perhaps too far. And that would be a shame.

Have your say: Do you think Rohit Sharma deserves a spot in India's Test team?