India in Australia 2020: 3 Major Triumphs Stand Out in Toughest Away Venue for India in ODIs

As India embark on another tour Down Under, we go back and analyze some of the numbers that have defined the ODI rivalry between the two teams in Australia. Australia has been one of the toughest destinations for visiting teams over the years and nothing has changed in the previous decade too. They have won 13 of the 18 ODI series/tournaments at home, including the 2015 World Cup, since the 1st of January, 2010. Interestingly, three of the 4 series losses have come in the last three years suggesting a decline in their dominance.

As India embark on another tour Down Under, we go back in history and analyze some of the numbers that have defined the ODI rivalry between the two teams in Australia.

India has their second-worst ODI record in Australia India has won 39 and lost 51 of their 96 matches in Australia - this makes the win-loss ratio of 0.764 their second-worst in any country. This suggests that it has not been easy for India Down Under. Victories have been rare and few and far between.

Also Read: This is How Virat Kohli is Chilling During Quarantine Period

Fast and bouncy pitches, hostile crowds, alien conditions and the big grounds with massive outfields and of course, the dominance of the Australian cricket team - are the major factors for India's modest record Down Under. India has played 13 series/tournaments in Australia over the last 40 years. It has been victorious in just three - the Benson and Hedges World Championship of Cricket in 1985, the 2008 Commonwealth Bank Tri Series and the 2019 bilateral series. 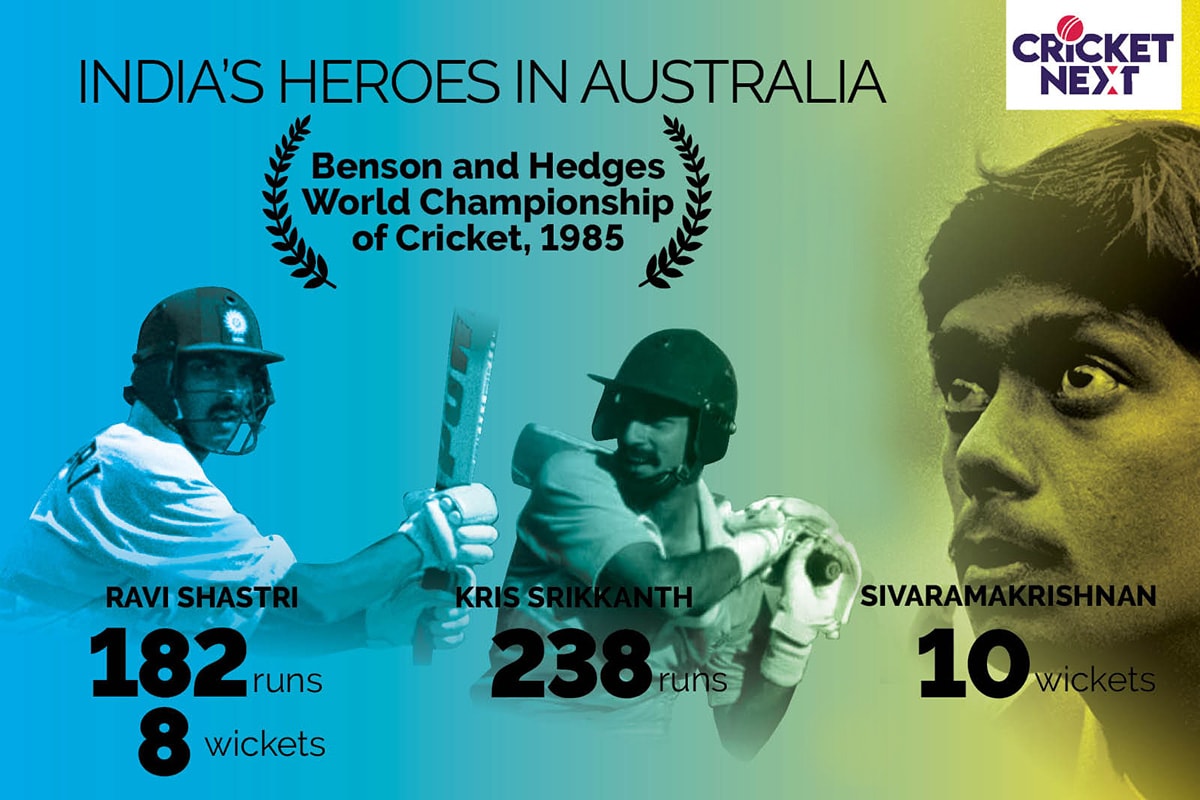 India were dominant in the 7 nation tournament winning all their 5 matches and that too comprehensively. Ravi Shastri was the Player of the Series for his all-round performance especially in the semi-final and final.

Kris Srikkanth was the highest scorer of the series and scored his runs at a rapid rate, Kapil Dev was very economical - quintessential Kapil quality in ODI cricket while Madan Lal showcased his big-match temperament in the semi-final against New Zealand.

Debutant leg spinner, Laxman Sivaramakrishnan was the leading wicket-taker of the tournament. It was the second greatest triumph for India (after the 1983 World Cup) in a world tournament. Sachin Tendulkar's unbeaten 117 coupled with Rohit Sharma's 66 were the highlights for India as they chased down Australia's 239 in the first final of the tri-series (also involving Sri Lanka) at the SCG in 2008.

Tendulkar was again the star for India with the bat as he top-scored with 91 in the second final in Brisbane but it was Praveen Kumar who won them the match and with it the series.

The right-arm swing bowler saw the back of Gilchrist, Ponting and Clarke before the completion of 10 overs in Australia's innings. He then returned and broke a threatening 29-run 7th wicket stand between James Hopes and Brett lee dismissing the latter.

India won by 9 runs. Gautam Gambhir was the highest scorer for India in the series. India came back from behind to beat Australia 2-1 in the three-match series. Australia beat India by 34 runs at the SCG but the visitors fought back courtesy a brilliant 104 by Virat Kohli and an unbeaten 55 by MS Dhoni at the Adelaide Oval - India chased down Australia's target of 298.

Yuzvendra Chahal ran through the Australian batting line-up at the MCG and returned with 6-42 in his 10 overs - the best bowling figures by an Indian bowler in Australia. The hosts were cleaned up for 230. Kohli, Dhoni and Jadhav knocked off the runs and India were victorious by 7 wickets.

A Tough Time for India in Australia

However, India did give a commendable performance in the 2015 World Cup in Australia and New Zealand where they won all their matches before going down to Australia in the semi-final in Sydney. Shikhar Dhawan was India's highest scorer with the bat with 412 runs in 8 matches at a strike rate of 91.75 including 2 hundreds. Umesh Yadav (18 wickets) and Mohammed Shami (17 wickets) were the third and fourth highest wicket-takers of the tournament.

The One-Run Heartbreaker at The Gabba

Australia beat India by one run in Brisbane in a nail-biting thriller in the 1992 World Cup. Australia registered a par 237 for 9 courtesy a Dean Jones 90. India, led by their skipper, Mohammad Azharuddin (93) and Sanjay Manjrekar (47) were in the drivers' seat at 194 for 4 in the 43rd over before the dismissal of Azharuddin triggered a massive collapse.

13 were needed off the final 6 deliveries. Kiran More got two boundaries off Tom Moody and suddenly India were favourites again. 5 off 4. More drama as Moody cleaned up More. 5 off 3. A single to Prabhakar. 4 off 2 and Prabhakar was run-out.

More crucially, no run for India. 4 off 1. Srinath heaved Moody over wide long-on where Steve Waugh dropped the catch but sent in a good throw to run-out Raju. Australia had stolen a one-run win!

Rohit's Runs, Ishant's Wickets and Other Records for India Against Australia in Australia

Rohit Sharma has the highest aggregate for India against Australia in Australia. He has scored 990 runs in 19 innings at a strike rate of 90.99 including 4 hundreds against them.

Ishant Sharma picked 18 wickets in just 9 innings against Australia in their own backyard - the hard and bouncy wickets suited his back of a length style of bowling.