Kusal Mendis and Dimuth Karunaratne starred with the bat in the second innings for the hosts after India bowled out Sri Lanka for a paltry 183 runs in the first innings and enforced the follow on the third day of second Test at Colombo on Saturday. 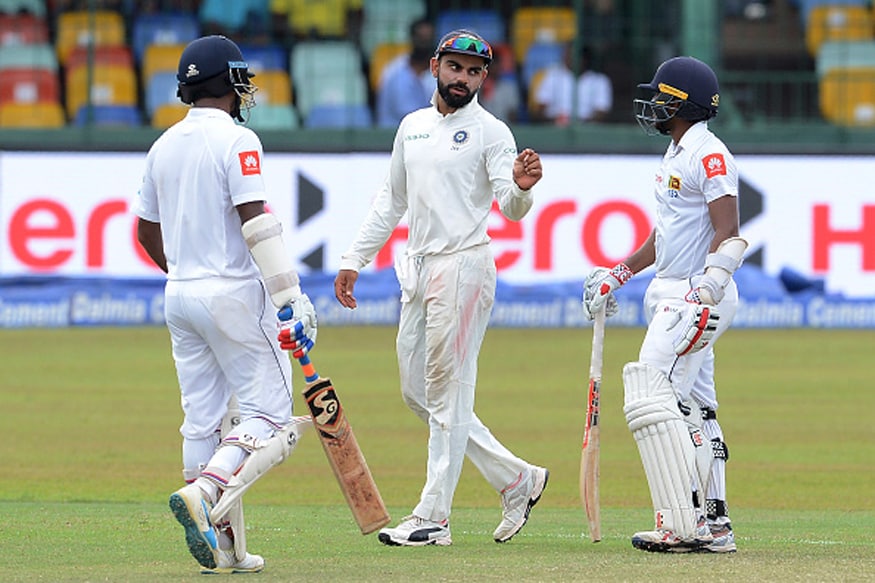 Colombo: Kusal Mendis and Dimuth Karunaratne starred with the bat in the second innings for the hosts after India bowled out Sri Lanka for a paltry 183 runs in the first innings and enforced the follow on the third day of second Test at Colombo on Saturday.

Despite a spirited century from Mendis and an unbeaten 92 by Karunaratne, the Islanders are still 230 runs behind India's first innings score of 622/9d with two day's of play still left.

After coming out to bat again, Umesh Yadav gave the visitors the perfect start as he got rid of opener Upul Tharanga in just the third over after lunch. Tharanga was beaten by Umesh's pace and the ball crashed into his middle stumps while he was batting on 2.

However, after this early dismissal, Karunaratne was joined at the crease by Kusal Mendis and the duo started the counter-attack for the hosts. The duo dealt with the initial overs of Ashwin and Jadeja and then broke free after they were set in the middle.

Both Mendis and Karunaratne kept the scoreboard ticking and also brought up their respective half-centuries. Mendis was the proving to be the aggressor of the two as he was hitting boundaries at will.

Mendis continued the onslaught and finally notched up his well-deserved century and by doing so he became the first player to score a century against India while following on since 2012. The last player to do so was England's Alastair Cook, who slammed 176 in the Ahmedabad Test in 2012.

Looking to break the partnership, Kohli introduced his X-factor player Hardik Pandya into the attack and the decision worked wonders for the visitors. Pandya got rid of Mendis for 110 and broke the 191-run partnership. This mammoth stand was third highest partnership against India while following on.

The hosts were dealt with no more hiccups in the final stages of the day as they ended the day at 209/2, with Karunaratne and nightwatchman Pushpakumara at the crease.

Earlier, starting at overnight score of 50/2, the hosts were dealt with a blow early on in the day as Jadeja got rid of skipper Dinesh Chandimal for just 10 runs. In the next over, Kusal Mendis too followed suit as he was caught out at mid-on off the bowling off Umesh Yadav for 24.

Angelo Mathews and Niroshan Dickwella then steadied the ship for the hosts and hit few boundaries to settle some nerves. The duo put on a 53-run stand for the fifth wicket — which was the highest in the Lankan first innings.

Ashwin finally breached the defense of Mathews who was dismissed for 26, courtesy of a brilliant catch by Cheteshwar Pujara at leg slip.

Dhananjaya de Silva was the next to depart as he was castled by Jadeja for 0. With this wicket, Jadeja became the second fastest India bowler (32 Tests) to scalp 150 wickets in the longest format of the game. Only Ashwin (29 Tests) is ahead of the left-arm spinner in this list.

But Niroshan Dickwella continued to play risk-free cricket and notched up his fifth Test half-century off just 44 deliveries. But soon after completing his fifty, he went for an extravagant scoop shot and was castled by Mohammed Shami.

In the same over, Shami got rid of Ranaga Herath who missed a straight delivery and the ball crashed into his stumps while he was batting on 2.

Ashwin then wrapped up the innings by taking the final two wickets and by doing so he completed his 26th five-wicket haul in Test cricket. Ashwin overtook Harbhajan's record of 25 five wicket-hauls and now, he is only behind Anil Kumble who has 35 of these to his name.

India took a humongous lead of 439 runs and it was their third highest first innings against any side in the world.