Back to News18
Home » Cricket Home » News » India vs Afghanistan, Asia Cup 2018 Highlights - As It Happened

India vs Afghanistan, Asia Cup 2018 Highlights - As It Happened

Catch all the live updates of the match between India and Afghanistan at the Asia Cup in Dubai on Cricketnext.com

Asghar Pathan, Afghanistan Captain: Today the wicket was a good one for us. Shahzad played really well and very positive cricket. Their opening partnership was good and our spinners did an equally good job. When you tie a match with a side like India, it's just like a win. Such tough games are good for the fans as well. Every time we have asked him, Shahzad has done it for us. Again, I give him a lot of credit for his knock. Thank you very much.

Dhoni, India captain: Their (Afghanistan's) cricket has improved a lot. The way they have continued from the start of the Asia cup, it is commendable and we have enjoyed it. It is one country that has risen through the ranks very well. The wicket slowed down later, but they bowled extremely well throughout the game. I wouldn't say we went wrong in the chase. To start off, it was like a handicap in golf. We didn't go with a full-strength side. We didn't hit the back of a length area, and we gave away too much initially with the ball. The wicket slowed down over the course of the game, so someone should have continued with the bat. There were a couple of run-outs, and a few things we can't talk about (the incorrect LBW decisions) unless you want to get fined for it. It's good that it's a tie, but they played really well.

I'm convinced, to be an Afghanistan cricket fan, you've got to have nerves of steel. Another humdinger but the day belongs to my dear friend @MShahzad077 , well played and keep entertaining buddy #INDvAFG #AsiaCup2018

Afghanistan deserved this. A tie but in all fairness they have played unbelievably well and are a force to reckon with. Afghanistan must be very proud , they have some real winners #IndvAfg

What a nailbiter, Afghanistan would feel this is  the least they deserved after heartbreaking losses against Pakistan and Bangladesh earlier. The fans are delighted and they are treating this like a win.

WICKET! Would you believe it, Jadeja has hit that one in the air and its caught by Nabi. This ends in a tie! What a match and what an end here. A couple of poor decisions going against India but Afghanistan would be delighted with this! India are dismissed for 252 and Afghanistan are delighted.

Khaleel Ahmed picks a single and that means just 1 run required for India!

FOUR! Fantastic shot from Jadeja and it goes all the way! Goes down on one knee and brings out the big sweep, goes over mid-wicket and it looked like a six. That looks like another rather poor decision which goes against India.

It all comes down to the final over then, 7 runs are required for India to win this. Jadeja will take strike and Rashid Khan will bowl the last over..India are 246/9!

WICKET! Another one departs, another run out and this time its Siddharth Kaul whose bat gets stuck. Third Indian player to depart this way, he goes for a duck and India are nine down. Still 8 runs required to win!

WICKET! Kuldeep with a great shot through the covers but great fielding in the deep by Naib, who gets in the big dive and then gets in a solid throw, Aftab collects the ball and hits the stumps. Kuldeep's bat also got stuck there and India are now 242/8

Rashid Khan concedes 4 runs from the 48th over here, that means India need 13 runs from the final 2 overs. This is the over India will go after you feel, Aftab Alam to bowl the over. Spectators are already biting their nails here

Final three overs left then, Rashid Khan will bowl two of them. India need 17 runs and this is turning into an absolute nail biter here!

That looks like an ugly bruise for Shenwari! India pick two, but Shahzad misses the ball and Shenwari is standing just behind him. The ball bounces and hits him right in the eye. That's gotta hurt and he has got a big bruise. India pick two though, they are 233/7

Nabi now concedes 4 runs in the over,  he has bowled out here and finishes with figures of 2/40 in his 10 overs. Four overs remaining here and India need 23 more runs to win.

Kuldeep Yadav has come out to join Ravindra Jadeja here, Afghanistan can see the finish line here but they have stumbled at this position before! Can they see this through or will India cross the finish line? India are 229/7 currently

WICKET! Aftab strikes now, Chahar looks to play across the line but completely misses the ball and sees his furniture disturbed. India are now 226/7 and look to be in all sorts of trouble here.

Chahar gets a much needed boundary for India as he hits one past backward point and it goes for a boundary, that will release some pressure for India. We are all set for a nail biting finish here but. India are 223/6 after 44 overs here!

Rashid Khan now concedes just 3 runs in the over, Afghanistan won't mind that. They will feel if they can get Jadeja here then they will have the game. India are currently 217/6

The Afghanistan players are just upping the ante here, they are bowling excellently at the moment and the fielders also have their tails up. Jadeja not being able to read Mujeeb, India are 213/6 after 42 overs here 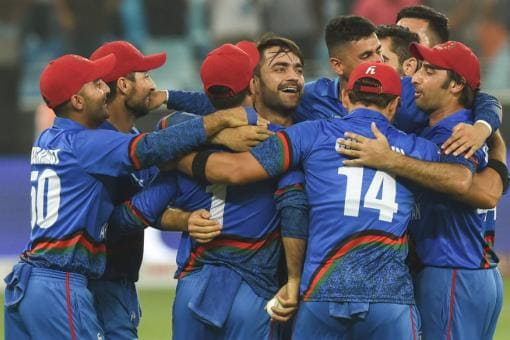 LATEST UPDATE: WICKET! Would you believe it, Jadeja has hit that one in the air and its caught by Nabi. This ends in a tie! What a match and what an end here. A couple of poor decisions going against India but Afghanistan would be delighted with this! India are dismissed for 252 and Afghanistan are delighted.

The live telecast of the match will start at 5:00PM on September 25 (Tuesday). The match can be seen live on the Star Sports network and live streaming will be available on www.hotstar.com. You can also follow our live blog for ball-by-ball updates and analysis on cricketnext.com.

Preview: India arrived in the United Arab Emirates (UAE) for the 2018 Asia Cup looking for answers to their middle-order woes with the 2019 World Cup on the horizon, but that hasn't happened. While the Rohit Sharma-led side have been in phenomenal form in this tournament, largely because of their openers and bowlers, their middle-order still remains untested.

Having already booked a place in the Asia Cup final, India will hope their untested middle-order finally gets some game time when they take on ever-improving Afghanistan in their third and final Super Four clash at the Dubai International Cricket Stadium on Tuesday.

After their unimpressive, yet winning, start against Hong Kong, India have looked authoritative in the next three games. They thumped Pakistan by eight wickets in the group stage before strolling to a seven-wicket victory against Bangladesh in their first Super Four encounter. Then they again brushed aside Pakistan by nine wickets on Sunday to confirm their place in the finale. Chasing 238, India rode on Rohit and Shikhar Dhawan's centuries to get the job done with more than 10 overs to spare. This has largely been the story of India in this event. The bowlers haven't allowed opponents to score big, and whatever little has been offered on the plate, the opening duo of Rohit and Dhawan have taken care of it.

In total, Dhawan (327 runs) and Rohit (269) have done the bulk of the scoring in the four games so far, while Rayudu has 116 runs, only because he comes to bat at No. 3. India's top-order has been in spectacular form but the likes of MS Dhoni, Dinesh Karthik and Kedar Jadhav have hardly got any chance to test their skills on the middle. If we throw in some more numbers, Rohit and Shikhar have so far faced 284 and 321 deliveries respectively, while the next best Rayudu has played 162 balls. And now compare it to Karthik (78 balls), Dhoni (40 balls) and Jadhav (27 balls). India can be found wanting if the top-order collapses in the final against either of Pakistan or Bangladesh, who will play a shootout on Wednesday. This is exactly what happened in the 2017 Champions Trophy where India's top-order scored tons of runs in the tournament but crumbled in the finale against Pakistan which led to their downfall. More importantly, India need to finalise their No. 4 as soon as possible. It was Dhoni who came out to bat at that position against Bangladesh and the team management should give the Ranchi stalwart enough games to make himself comfortable at No. 4. The likes of Jadhav, Karthik and Ravindra Jadeja can bat around Dhoni, and if set, we all know about the damage the wicketkeeper-batsman can cause in the last few overs.

The Indian captain might also look to bat first if he wins the toss as that will give his team the entire 50 overs. India won't have it easy against the Afghanistan spin trio of Rashid Khan, Mujeeb ur Rahman and Mohammad Nabi, but maybe that's exactly what they want at this time. It's also very unlikely India will make any changes in the batting department considering the middle-order has hardly got any game time. They might rest one of Dhawan or Rayudu to bring in KL Rahul just to offer him a game. In the bowling department, all of Bhuvneshwar Kumar (seven wickets), Jasprit Bumrah (four wickets), Yuzvendra Chahal (five wickets), Kuldeep Yadav (five wickets) and Jadeja (four wickets) have been consistent. However, India might look to give Bhuvneshwar and Bumrah some rest ahead of the final. Then two among Deepak Chahar, Siddharth Kaul and Khaleel Ahmed can take their spots in the playing XI for the game. Meanwhile, it has been a so-close-yet-so-far sort of tournament for Afghanistan. They won both their group games against Sri Lanka and Bangladesh but then lost two close matches in the Super Four. First, they failed to defend ten runs in the last over against Pakistan, and then on Sunday, couldn't score eight runs off the final over against Bangladesh. Afghanistan came into this tournament with a set game plan and have stuck to it. Their batsmen, especially Hashmatullah Shahidi, have done reasonably well and have given their bowlers 240-260 runs in every game. Afghanistan's bowling attack comprising Rashid, Mujeeb, Nabi, Aftab Alam and Gulbadin Naib has been superb, and they have only lost their last two games due to lack of experience. Afghanistan might have been knocked out of the event but they still have plenty of life left in them and will want to make sure they don't hand India anything on a silver platter.