We look back at India's record at the SCG, the glorious moments, standout performances and other memorable matches for the visitors in Sydney.

India will clash with Australia in the crucial third Test at the Sydney Cricket Ground (SCG) from the 7th of January. With the series tied at 1-1 and off-field events adding more spice to the high octane on-field contest, both the teams will be raring to outperform each other at the historic venue. We look back at India’s record at the SCG, the glorious moments, standout performances and other memorable matches for the visitors in Sydney.

India has the Best Lost Percentage in Sydney

India has played 12 Tests at the SCG. Although they have a solitary win they have drawn as many as 6 matches at the venue and lost just 5. Their Lost Percentage of 41.67% is the lowest amongst all grounds in Australia. The wicket in Sydney has suited the various Indian teams that have toured Australia over the last few decades. It is usually batsman-friendly and aids spin with less pace and bounce as compared to wickets in Perth, Brisbane and even the MCG. India played their first Test at the SCG the year it gained independence – December 12-18, 1947. Lala Amarnath was leading the Indian team while Sir Don Bradman was the captain of Australia. The highlight of the Test was Dattu Phadkar’s all-round performance, on debut. He scored a fifty batting at number 8 and then picked three Australian wickets and along with Vijay Hazare skittled the home team for 107 in the first innings – it remains Australia’s lowest score at the SCG against any non-England opposition! The match ended in a draw.
1978 – The First Win – Viswanath’s 79 and the Great Spin Trio Hand India Historic Victory

Australia had won the first two Tests of the series at Brisbane and Perth before India came back with a victory at the MCG (their first Test win in Australia). Australia, electing to bat first were routed for 131 as skipper, Bishan Singh Bedi and Bhagwath Chadrasekhar ran through their Packer-hit line-up. A 97-run opening stand between Sunil Gavaskar and Chetan Chauhan, a brilliant 79 from Gundappa Viswanath and contributions from the middle order (Dilip Vengsarkar – 48, Syed Kirnami – 42 and Karsan Ghavri – 64) helped India to 396 before they declared with 8 wickets down. 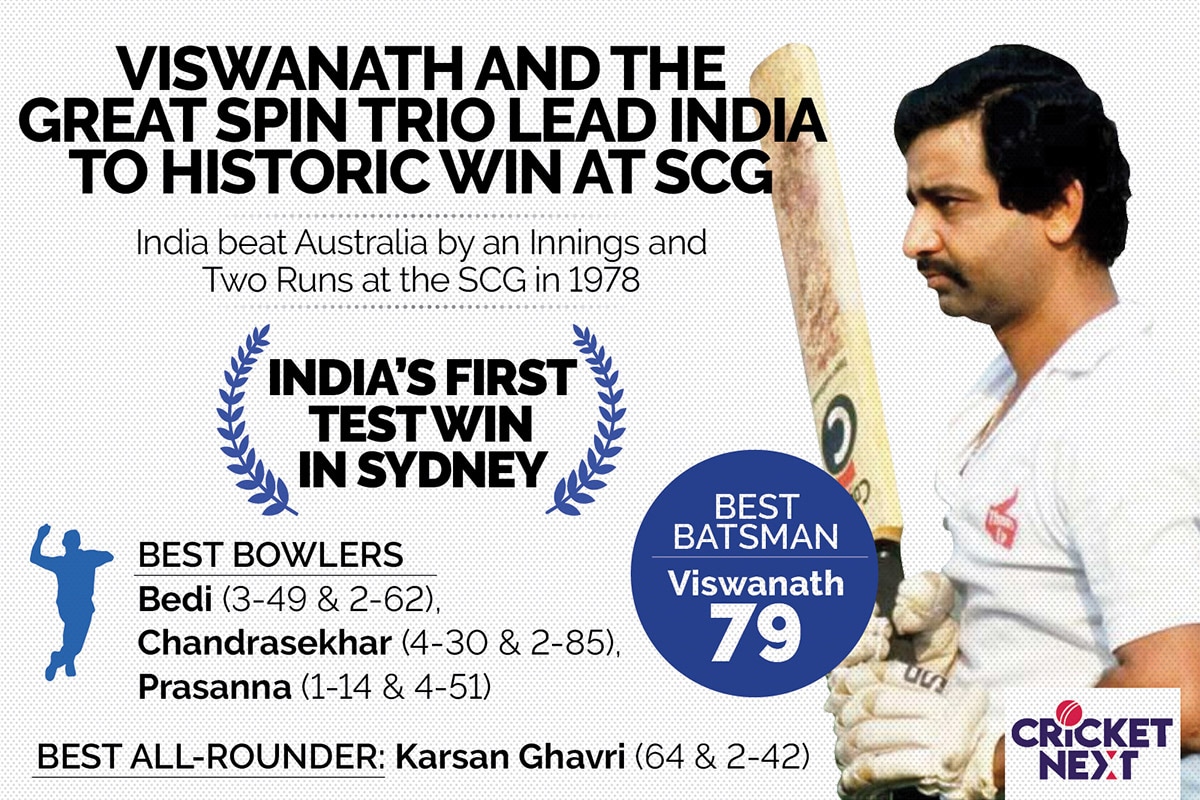 Australia fared better in the second innings with resistance from Gary Cosier and Peter Toohey but were ultimately bowled out for 263 giving India a historic innings’ and two runs win at the SCG. Erapalli Prasanna returned with 4 wickets in the second innings. It remains the only win for India at the SCG and also the only instance when they have won by an innings Down Under.

1986 – Three Hundreds in the Same Innings

It was the third Test in the series with the scoreline at 0-0. India, electing to bat first, piled on a massive 600 for the loss of 4 wickets before declaring the innings. Sunil Gavaskar scored 172 off 400 deliveries while his partner Kris Srikkanth, in contrasting fashion, hammered a 117-ball 116. The pair had added 191 for the opening-wicket before Srikkanth was cleaned up by Bruce Reid. Gavaskar then paired up with number 3, Mohinder Amarnath and added 224 for the third-wicket. Amarnath also registered a patient 138 off 312 deliveries. Mohammad Azharuddin scored a fluent unbeaten 59 as India declared on 600. India had dismissed Australia for 313 in the first innings. They lost the wicket of Sidhu early but Shastri and Manjrekar resurrected the innings. Shastri paired up with Vengsarkar to and put together a century partnership for the third-wicket. Then came the defining stand of the match. Shastri stayed dogged at one end while a young Sachin Tendulkar showed his class at the other. Tendulkar scored a fluent unbeaten 148 off just 213 deliveries against the bowling of McDermott, Merv Hughes and Warne – it was his first Test hundred in Australia. He put on a 196-run stand for the fifth wicket with Shastri during the course of which the all-rounder had recorded a patient double hundred before being dismissed for 206 off 477 deliveries. India piled up 483 and had Australia on the ropes at 173 for 8 before the match ended in a draw. If not for skipper Allan Border’s stubborn resistance (53 off 157 balls), India would have registered their second win at the SCG.

It was the great Steve Waugh’s farewell Test. The series was poised at 1-1 with all to play for for both the teams in the final Test at the SCG. India won a good toss and piled on the runs and agony for the hosts, desperate to win the match for their legendary batsman and captain. The highlight of the innings was the record-breaking 353-run partnership between VVS Laxman and Sachin Tendulkar – the second-highest stand by an Indian pair outside India and the highest outside the sub-continent. Laxman was finally dismissed for 178 while Tendulkar remained unbeaten on 241 – the second-highest score of his Test career and the highest outside the sub-continent. India went on to score a colossal 705 for 7 declared – it remains their second-highest team total outside India. Australia, set 443, ended with 357 for 6 with Steve Waugh scoring 80 in his final Test innings. The match and series, both ended in a draw.

Unlike the previous drawn matches at the SCG, where India had the upper hand and Australia were on the backfoot, the script was reversed in 2015. Hundreds from KL Rahul and skipper, Virat Kohli had helped India get closer to Australia’s first innings score of 572. However, set 349 for a win, India were reduced to 217 for 7 before Ajinkya Rahane (38 off 88 balls) and Bhuvneshwar Kumar (20 off 30 balls) batted together for 11 odd overs to help India secure a draw.

2019 – Pujara and Pant Hundreds and the First Series Win

India were 2-1 up in the series with a draw enough for them to record their first ever Test series’ win in Australia. India, electing to bat first, posted a massive 622. There were two outstanding centuries in the innings. Cheteshwar Pujara registered his third hundred of the series and scored a defiant 193 off 373 deliveries. In contrasting style, Rishabh Pant, batting at number 7, blasted 159 off just 189 deliveries. India bowled out Australia for 300 who were asked to follow on. However, rain hampered India’s quest for a 3-1 scoreline and the match ended in a draw. More significantly, it meant that India had won their first Test series in Australia. It is interesting to note that none of the 6 result Test matches between Australia and India at the SCG have been close encounters. While India won in 1978 by an innings, they have been at the receiving end on many occasions. They have faced three innings’ defeats and two other massive losses at the SCG (by 144 runs and 122 runs). However, there have been many nail-biting finishes amongst the 6 drawn Tests between the two teams at the SCG with 1992 and 2015 the best of the lot.