Australia had a horrendous run in ODI cricket losing 11 of the 13 matches in 2018. Their win-loss ratio of 0.181 was the lowest amongst all teams in 2018 – even lower than UAE and Zimbabwe! But then the tide turned. 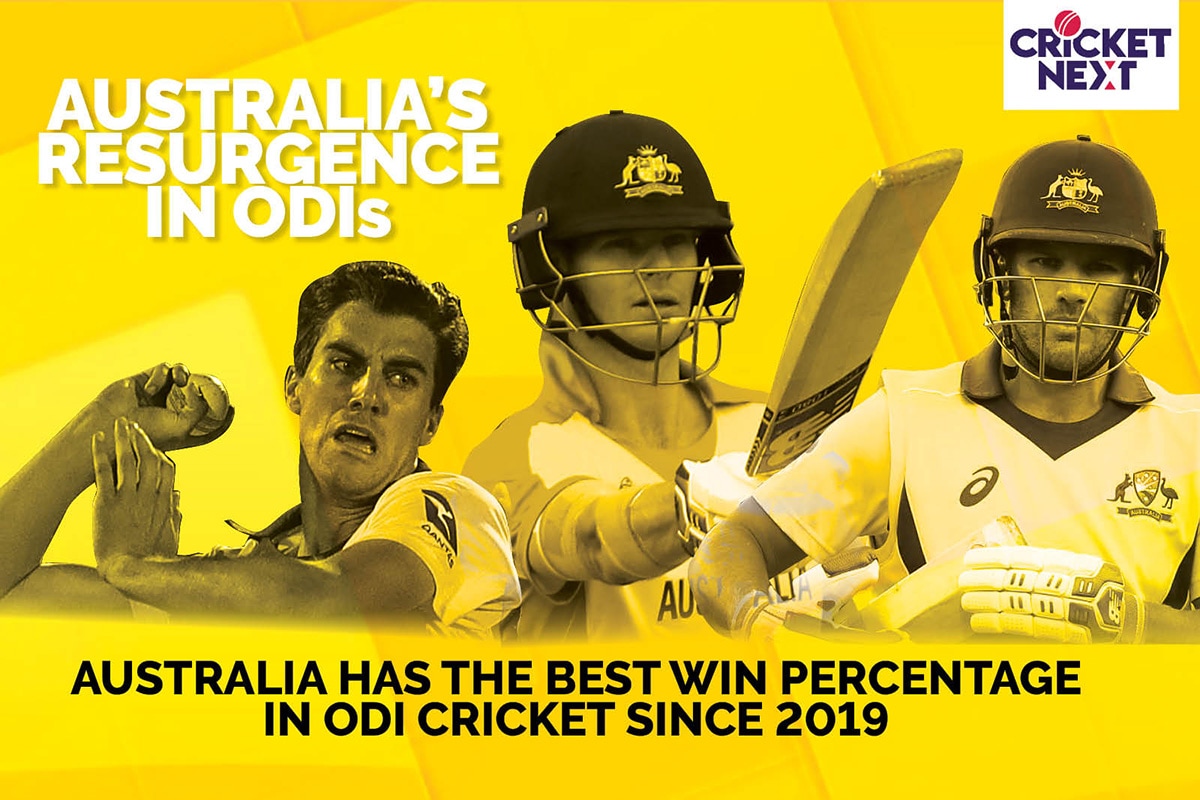 India vs Australia, 3rd ODI, Ranchi, March 8, 2019: India were 2-0 up in the five-match series. Usman Khawaja's 104 and skipper Aaron Finch's 93 helped the visitors post 313 for 5. Virat Kohli produced a masterclass 123 off just 95 deliveries but with almost no support act, India fell well short and went down by 32 runs.

The result of the match was of huge significance to Australia.

Not only did it inspire them to a remarkable series victory - they won the next couple of matches in Mohali and Delhi to stage a dramatic fightback and win the series 3-2 after being 0-2 down - but it ended a couple of years of Australia's worst period in its ODI cricket history and led to a resurgence of their fortunes in ODI cricket.

Australia had a horrendous run in ODI cricket losing 11 of the 13 matches in 2018. Their win-loss ratio of 0.181 was the lowest amongst all teams in 2018 – even lower than UAE and Zimbabwe! In fact, it was the lowest in Australia’s ODI history for any calendar year.

They had not fared much better in 2017 either losing 8 of the 15 matches they had played in the calendar year - it was their fourth-worst performance in a year in history (min. 5 matches). Thus, combining the two years, Australia lost as many as 19 of the 28 matches (and won just 7) it played in 2017 and 2018 - it was the second-worst win-loss ratio amongst all major teams (and some minor ones too) only after Sri Lanka! Ireland, Netherlands, Scotland, UAE, Hong Kong and even Nepal had a better win-loss ratio than Australia in this period.

Australia's batting average of 29.25 placed them at number 7 in this period after India, England, Pakistan, South Africa, New Zealand and Bangladesh. Their bowling average of 38.04 was only better than West Indies and Sri Lanka in this time-frame.

Usman Khawaja was the star for Australia in their 3-2 triumph over India - he aggregated 383 runs in just 5 matches including 2 hundreds and as many fifties top-scoring in the series. The bowling was led by Pat Cummins who picked 14 wickets at 15.71 apiece at an economy rate of 4.64. Adam Zampa gave him great support and returned with 11 wickets at just under 26 apiece.

The win was a big deal for Australia especially after what had transpired in the last couple of years. Also, the way the team fought back against all odds against India in India in a World Cup year was really commendable. It was Australia's first ODI series win in India since 2009. They had entrenched themselves in history - it was only the fifth time that a team had come back from 0-2 down to win a five-match ODI series!

An inspired Australia then brown-washed Pakistan 5-0 in the UAE. Aaron Finch was in devastating form and aggregated 451 runs in the 5 matches including 2 hundreds and as many fifties. Australia had a good run in the World Cup and won 7 of their 10 matches - they were beaten by a rampaging England in the semi-final.

They had an indifferent start to 2020 losing 2-1 to India in India and then getting thrashed 3-0 in South Africa. But then set the record straight with a fine away win against the World Cup holders and the best ODI team in the world - England - in their own backyard - in September 2020. Glenn Maxwell was in scintillating form and scored a match-winning 108 off 90 deliveries (from 73 for 5) putting together a double century partnership with Alex Carey for the sixth-wicket and pulling off a thrilling 302-run chase with just two balls to spare in the decider at Manchester.

This resurgence has meant that Australia has won 19 of the 28 matches it has played since the 8th of March, 2019 (Ranchi ODI against India) and has the best win percentage amongst all the teams in the world during this time-frame. From 19 losses in 28 matches in 2017-18, the fortunes have literally reversed and Australia has won 19 of its 28 matches since March 2019. The collective batting average has significantly risen to 37.02 while the bowling average has also improved and come down to 35.62. 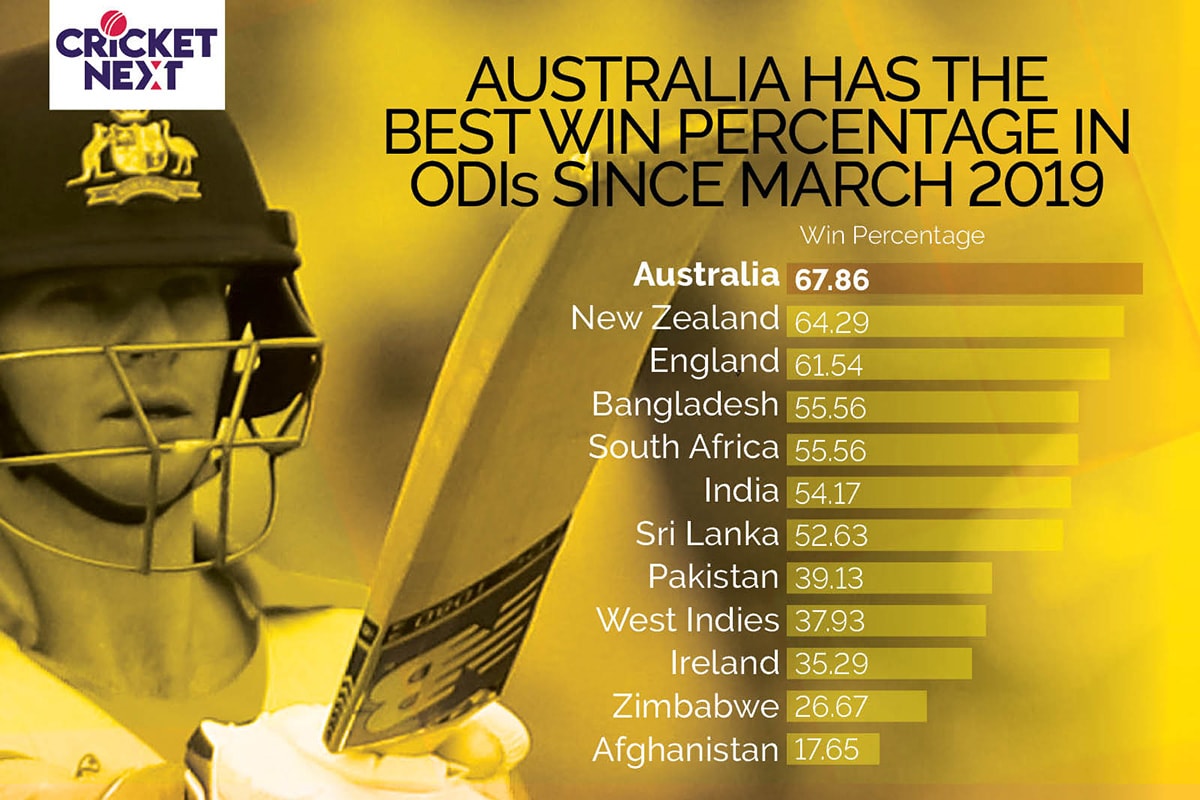 Finch and Warner have been the standout performers with the bat in this period. While the right-hander has aggregated 1502 runs in 28 matches at an average of 57.76 including 5 hundreds, the southpaw has scored 960 runs in 20 matches at 53.33 runs per dismissal and a strike rate of 90.65 including 4 hundreds. Khawaja has also scored heavily with an aggregate of 883 runs in 17 matches. Steven Smith (average 45.68) and Marnus Labuschagne (43.77) have also played a stellar role with the bat during this period.

Cummins, Zampa and Starc have been outstanding with the ball for Australia during this period. Cummins has picked 39 wickets in 23 matches at a very impressive economy rate of 5.14. Zampa has also picked the same number of wickets in a match less while Starc has accounted for 38 in just 19 matches at a strike rate of 28 - amongst the best in the world.

India beat Australia 2-1 in the ODI series the last time they toured Australia in 2019. Expect a stiffer challenge this time around!