Back to News18
Home » Cricket Home » News » India vs Australia 2020: Should KL Rahul Open or Bat in the Middle Order For India?

India vs Australia 2020: Should KL Rahul Open or Bat in the Middle Order For India?

Should the Indian vice-captain, KL Rahul, open with Dhawan or bat in the middle order? Rohit Sharma's absence from the ODI squad has created a huge void for India at the top of the order as they get set to face Australia in what will be a tough three-match series starting from the 27th of November in Sydney. It is not easy for any batsman to fill Rohit's shoes given his tremendous record at the top of the order for India in the last few years. But on the positive side, it also gives others a chance to prove their mettle on the big stage.

The question then remains - Who should partner Shikhar Dhawan at the top of the order for India? It can be re-framed. Should the Indian vice-captain, KL Rahul, open with Dhawan or bat in the middle order?

Let us analyze his record in various batting positions for India.

RAHUL HAS A GREAT RECORD AS OPENER Rahul, the ODI opener has an aggregate of 808 runs in 18 matches at an average of 50.5 and strike rate of 81.53. His exploits have included 3 hundreds and 5 fifties - early days and a small sample size but these are still very impressive numbers! In fact, Rahul's average as an opener has been higher than even Dhawan's (46.6) since the former made his debut in June, 2016. It is also better than some other big-names in ODI cricket like Bairstow, De Kock, Finch, Amla, Roy, Gayle and Guptill in this period.

This does not come as a surprise. Rahul is a gifted attacking stroke-player who likes the new ball and makes use of the fielding restrictions before settling down to play the long innings. It is as an opener where he has tasted massive success in the IPL too - he was the highest run getter of the season in 2020 scoring heaps of runs opening for Kings XI Punjab.

Rahul has been a match-winner at the top of the order for India and has an average of 66.36 in victorious matches for his country. India has won 7 of the 8 matches when he has scored 50-plus as an opener emphasizing how valuable he has been to the team's success. Just for perspective, Dhawan has an average of 47.87 in wins for India since Rahul's debut - still good numbers but significantly lower than Rahul's!

The only criticism of Rahul - the opener - is his strike rate of 81.53 places him as low as number 37 amongst the 51 openers who have scored a minimum of 300 runs since June, 2016. It is surprising that despite having all the shots in the textbook and more, Rahul chooses to play within himself and not go all-out. This seems to be a trend - a similar pattern was seen in IPL 2020 as well where Rahul started being at his destructive best but then settled down in the role of the anchor and accumulator - he ended with a below average strike rate of 129.34 - and despite the number of runs he scored, not only was this counter-productive for him but also for his team as the value and significance of the big runs gets severely diminished if they are not scored at a certain minimum scoring rate.

But his strike rate notwithstanding, Rahul has an excellent record as an opener in ODI cricket and has played a majority 58% of his career at the top of the order for India.

The dilemma for India is that if Rahul opens with Dhawan and performs well, then it would be unfair to again push him to the middle order once Rohit Sharma returns to the XI. And that is bound to happen as the Rohit-Dhawan pair is amongst the greatest of all-time in ODI history.

So, should India then open with Mayank Agarwal and Dhawan and push Rahul to number 4 or 5?

What about number 5 then? 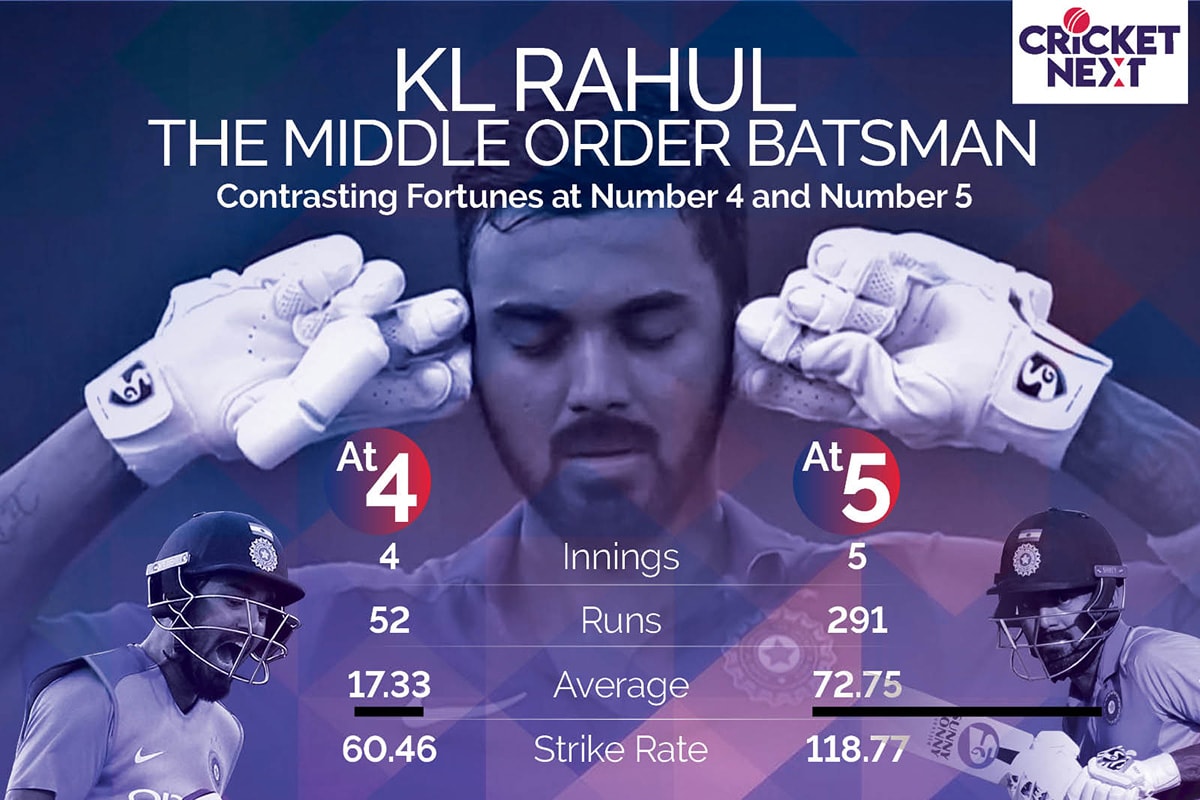 There is a strong case for Rahul to bat at number 5. He has scored 291 runs in 5 innings at an average of 72.75 and strike rate of 118.77 including a hundred and two fifties from the position. He scored a run-a-ball 112 against New Zealand from number 5 at Mount Maunganui in February 2020 - showing great maturity and temperament getting India out of a hole after they lost early wickets, building an innings and then stepping on a gear to accelerate at the death.

This solves two problems for India - firstly, the Indian batting is top-heavy and needs a world class batsman to bat between 4-6. Rahul is that option. Secondly, India need a finisher apart from Hardik Pandya and Rahul has the game to provide the impetus at the death.

This will also help Rahul own a position in the ODI XI and not be pushed around as a floater.

India should think long term and not get tempted to use Rahul as an opener. A number 5 spot for him will solve many puzzles in one stroke.