We look at 10 Interesting Numbers About the Manuka Oval in Canberra where Australia is going to host India for the third and final ODI.

Australia has already clinched the three-match series against India with wins in the first two matches in Sydney. The two teams will now clash in the third and final ODI at the Manuka Oval in Australia's capital city, Canberra. Not much is known about the picturesque venue which has played host to 11 international matches including 9 ODIs. It has one of the largest playing areas amongst all stadiums in the world.

Also read: T Natarajan Could Get a Chance As India Look to Avoid Whitewash

We look at 10 Interesting Numbers About the Manuka Oval in Canberra:

Both are the highest amongst all the venues in Australia (min. 4 matches hosted).

1.22: Ratio of Hundreds Per Match in Canberra

It is the best amongst all the venues in Australia (min. 4 matches). A total of 11 hundreds have been recorded in just 9 matches at the Manuka Oval. 3-31 & 62: Peter Kirsten's Man of the Match Effort in the First Ever ODI in Canberra

South Africa clashed with Zimbabwe in the 1992 World Cup in what was the first ODI in Canberra. Peter Kirsten, bowling some right-arm off-break, broke the backbone of the Zimbabwe middle order dismissing Andy Waller, Dave Houghton and Ali Shah. He returned with 3-31 in 5 overs before anchoring the chase with an unbeaten 62.

India has lost both its matches at the Manuka Oval. Sri Lanka beat India by 8 wickets in a rain curtailed encounter in the Commonwealth Bank Series in 2008.

Australia beat India in a high-scoring match at the venue in 2016. The home team, propelled by a hundred from Finch and 93 by Warner and cameos from Steven Smith (51 off 29 balls) and Glenn Maxwell (41 off 20 balls), hammered 348 for 8. Centuries from Dhawan and Kohli led the chase but with almost no support from the middle and lower order, India collapsed after a scintillating double hundred partnership between the pair and ultimately were bowled out for 323. 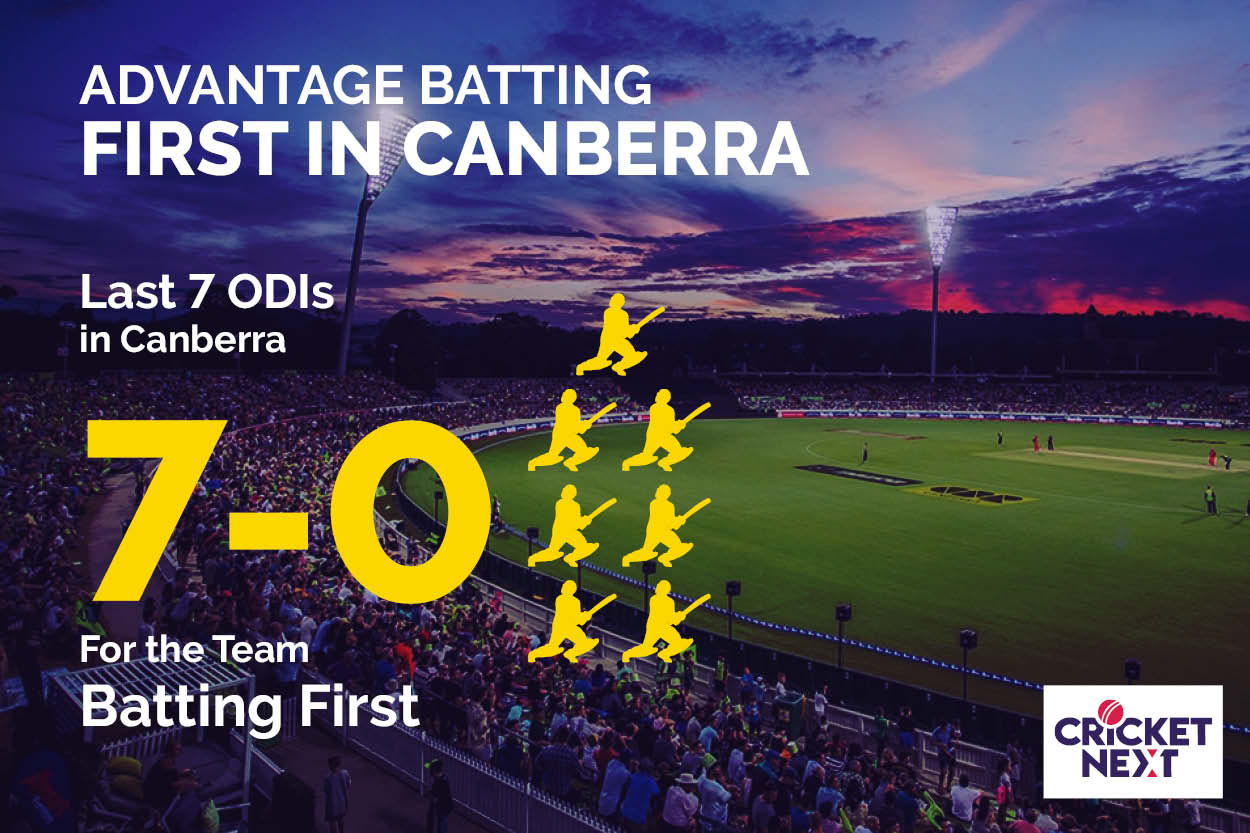 Australia has won all its 4 matches at the venue.

7-0: The Scoreline of the Last 7 matches For the Side Batting First

The side setting the target has won the last 7 matches at the Manuka Oval (starting from Australia vs West Indies in 2013). Three of these have been by massive above 100 margins!

7: Number of 300-Plus Totals in Canberra

There have been as many as 7 300-plus totals in 9 matches at the venue. South Africa's 411 for 4 against Ireland in the 2015 World Cup is the highest score in Canberra. Australia has scored in excess of 325 in all the 4 matches it has played at the Manuka Oval.

215 & 372: The Highest Individual Score in Canberra and The Highest Partnership in ODI History

Chris Gayle smashed 215 off just 147 deliveries (including 16 sixes) at the Manuka Oval against Zimbabwe in their 2015 World Cup encounter. It is one of the 8 double hundreds in ODI cricket history!

The match also witnessed the highest partnership in the history of ODI cricket as Gayle and Samuels put together 372 for the second-wicket.