Back to News18
Home » Cricket Home » News » India vs Australia 2020: Virat Kohli On Verge Of Breaking Another Sachin Tendulkar Record

India vs Australia 2020: Virat Kohli On Verge Of Breaking Another Sachin Tendulkar Record

Tendulkar is the fastest to reach 12000 ODI runs. He reached the milestone during his 300th innings against Pakistan at the Centurion in South Africa in the 2003 World Cup. But if Kohli gets there, he will be the fastest to 12k as he will be doing so in 58 innings lesser than the Master. Virat Kohli broke Sachin Tendulkar’s record and became the fastest to 22000 international runs during his 87-ball 89 against Australia in the second ODI at the SCG on Sunday. The Indian captain will have a chance to break another Tendulkar record when India clash with Australia in the third and final ODI at Canberra on Wednesday, the 2nd of December. 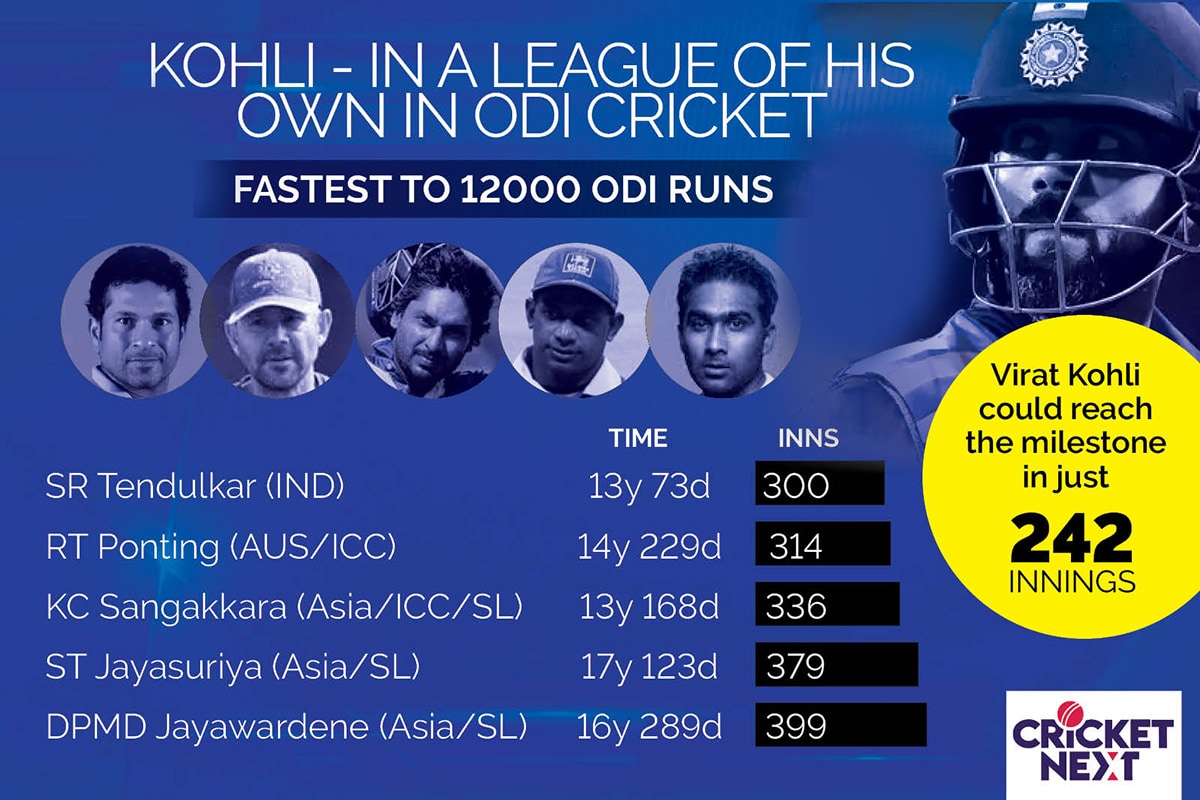 Tendulkar is the fastest to reach 12000 ODI runs. He reached the milestone during his 300th innings against Pakistan at the Centurion in South Africa in the 2003 World Cup. The Little Master could not have chosen more grand an occasion to achieve the feat. He scored a match-winning 98 off just 75 deliveries in what was one of the most defining performances of his career.

But the astonishing stat is that Kohli might reach the landmark in 58 innings faster than Tendulkar! That will be an incredible achievement should it happen in Canberra on Wednesday. Kohli has an aggregate of 11977 runs in 241 innings at an average of 59.29 and strike rate of 93.32 including 43 hundreds and 59 fifties. He is just 23 short of breaking Tendulkar’s record.Only 5 batsmen including Tendulkar in the history of ODI cricket have crossed the milestone of 12000 runs. Ricky Ponting reached the milestone in 314 innings, Kumar Sangakkara in 336, Sanath Jayasuriya in 379 and Mahela Jayawardene in 399. The fact that Kohli may reach the 12000 Club in just 242 innings speaks volumes of his greatness and consistency in the format. Another statistic which showcases Kohli’s dominance in ODI cricket is his career comparison with Tendulkar after a similar number of matches. Tendulkar was a genius and much ahead of any one else in his era in ODI cricket. At a similar stage in his career (as Kohli) he had an aggregate of 9237 runs at 42.17 runs per dismissal at a strike rate of 86.41 including 25 hundreds and 47 fifties. There is a difference of a staggering 2740 runs and 18 hundreds between him and Kohli after their respective 241 innings.

Even if one accounts for standardizing average and strike rate with the norm of the times, Kohli’s run-making prowess places him much ahead of Tendulkar, who interestingly was a more attacking batsman in his era than Kohli is in contemporary ODI cricket.Tendulkar made it to the 12000 Club with a fine performance in Centurion, just a few kilometres away from the capital of South Africa, Pretoria.

Can Kohli better the Master in the capital city of Australia on Wednesday?