India vs Australia, 3rd Test Day 3 in Melbourne Highlights: As it Happened

Cheteshwar Pujara, Virat Kohli and Rohit Sharma ensured India stayed in charge of the third Test after Mayank Agarwal set a good platform on the first day. Pujara scored his 17th Test ton and second of the series. Kohli fell for 82, while Rohit remained unbeaten on 63 when India declared on 443 for 7. Australia's openers Aaron Finch and Marcus Harris saw through the six overs and ended on 8 for no loss at stumps.

Auto Refresh
ON OFF

The decision to not enforce the follow-on and come in to bat once again has not panned out how captain Kohli would have liked it. All said and done, India still has a heft lead, with two full days of cricket remaining.

And Agarwal successully fends off the last ball of the day! India finish proceedings 54/5. 15 wickets went for a 197 runs in total and this Test  match has come alive.

Four. A loose ball from Hazlewood down the leg side is guided down the fine leg area by Pant. India are 52/5.

The last over of the day begins, and Josh Hazlewood has the ball...

Another one spits up from just short of good length from Josh Hazlewood, a delivery which Agarwal gets to the top of and kills it on the pitch. It's come at the cost of a jolt to his hands, though. He certainly felt that on the handle of the bat.

On only eight occasions has a single bowler dismissed Kohli, Pujara and Rahane in the same Test innings. On four of those occasions, the bowler has been Nathan Lyon. #AUSvIND

And with half of India's side back in the pavilion, Rishabh Pant comes out to bat.

And just as we say that, Rohit Sharma is OUT!  He tries to flash one through the offside, but the ball was on the rise and he edges it back to Shaun Marsh at first slip. All that good work undone!  India are 44/5, and looking like they're in a spot of bother here.

The pitch has not been consistent by any means. The odd ball is still keeping low, and Sharma has done well to get his eye in in these conditions. Agarwal looking good as well as he reaches 25.

meanwhile, mayank agarwal looking quite assured, like he's playing a canteen staff attack or something #AUSvIND

Four. Agarwal's outside edge helps the ball along to the boundary from the third-man fielder. The pressure is relieved slightly. India are 43/4 in 21 overs.

80% of Pat Cummins' deliveries in this spell have been short balls, the highest percentage any bowler has sent down in an innings in this Test. #AUSvIND

India's lead now stands at 327 runs. But before they knew it, only six wickets remain.

It's time for Agarwal and Sharma to weigh their options and take the cautious approach now. There's no shortage of a lead, so the priority has to be to not lose another wicket.

The common theme in the dismissals of Rahane, Kohli and Pujara was onside play. The balls have been placed in the exact spot conducive to the field placement. India are 33/4 after 17 overs.

Sharma takes the aggressive approach from the first ball, and is almost caught off his first ball again. A close shave.

Cummins on a hat-trick..

Nobody who has dismissed Virat Kohli 4+ times in Test cricket has done so with a better strike rate (44.5) or average (15.25) than Pat Cummins. #AUSvIND

OUT!  Cummins is on a roll! Rahane feathers a ball that was going down the leg-side. The umpire deems that it's hit his gloves and he's walking back to the pavilion after having made one run. Astonishingly, India are 32/4.

It's now Ajinkya Rahane's turn to try and brave what is now looking like a confident Australian bowling attack. They're getting their lengths right, the fielders are chirping, and there's a new batsman at the crease. India are 32/3 after 16 overs.

OUT!  Kohli is gone in similar fashion as Vihari, the same fielder, the same bowler! He's gone for a duck as well and India are now 28/3. Cummins can't believe his luck, the set plan has worked. Not once, but twice.

Well that was quick. India are two wickets down in a matter of minutes and Australia are buoyant once again. Once again, India looks to Kohli who is now taking strike.

OUT! And he's gone! Pujara tries to flick the ball off his pads on his second delivery, but it goes straight to Harris and the talisman is dismissed for a duck. India is 28/2.

The hero of the first innings walks in! Cheteshwar Pujara takes strike...

OUT!  Vihari gets a brute of a delivery from Cummins and he's caught at short cover. Just as we were praising his technique against the short ball. But to be fair, Cummins was bang on the money here. India are 28/1, and Vihari is dismissed for 13 off 45 balls.

And Vihari does well to leave a bouncer from Cummins. His confidence is showing in the technique of that leave, a far cry fro his tentative approach to the short ball in the first innings.

Agarwal gets the ball over mid-wicket as it pitched on the good length spot and spat up. In the air for a bit, but lands away from any fielder. Lyon will get confidence from that, seeking to make the ball talk.

India aren't going any harder. In the first innings, they attacked 20% of deliveries in the opening 10 overs; today, they've attacked 21%. #AUSvIND

Ten overs gone here. India have gotten off to the start they would have liked to. The score reads 24/0.

FOUR! Agarwal with another beautiful shot. Lyon didn't do much wrong with that delivery, but the Indian drives it confidently through the covers. Both batsmen have gotten off to good starts here. 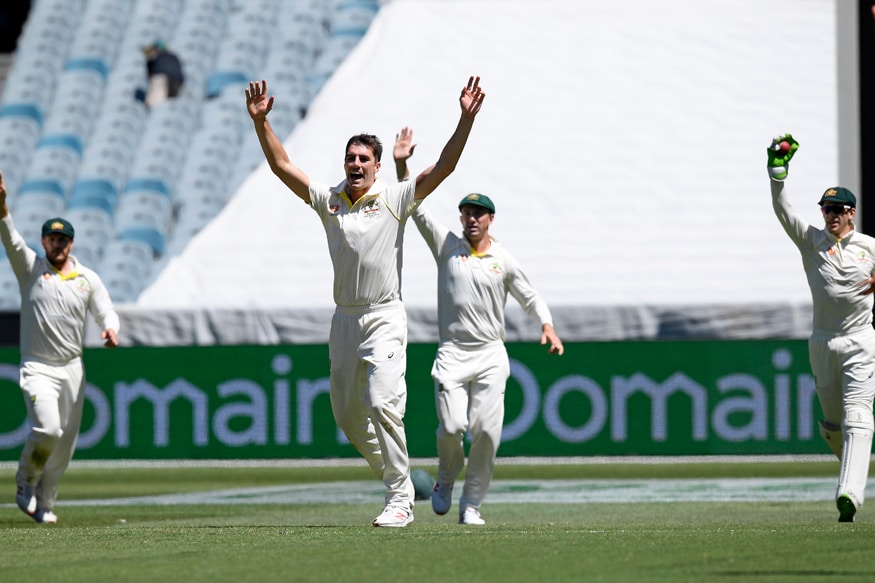 India vs Australia Live Score & Latest Updates: Another session that went in India's favour. Australia are reeling at 145 for 7 and are still 298 runs behind. Bumrah and Jadeja did most of the damage while Shami too chipped in with a wicket. Tim Paine is batting well on 22 but has been left alone with an improbable task. Australia still need 98 runs to avoid the follow-on.

Day two review: Cheteshwar Pujara, Virat Kohli and Rohit Sharma ensured India stayed in charge of the third Test after Mayank Agarwal set a good platform on the first day. Pujara scored his 17th Test ton and second of the series. Kohli fell for 82, while Rohit remained unbeaten on 63 when India declared on 443 for 7. Australia's openers Aaron Finch and Marcus Harris saw through the six overs and ended on 8 for no loss at stumps.

India batted for close to 170 overs through the first two days, and were not in a hurry to score. Ricky Ponting wondered if their slow batting would cost them the game, but Pujara felt the pitch did not allow quick scoring. The pitch has been rather lifeless so far, but there was the odd instance of uneven bounce which India will hope to exploit.

The India vs Australia Live Streaming will start at 5am on December 27 (Thursday). The match can be seen live on the Sony Network and will be available on SonyLiv. You can also follow our live blog for detailed updates and analysis on CricketNext.