Ajinkya Rahane got a couple of reprieves from the Australian fielders but barring that he was in control of his innings for as much as 86% of the deliveries he faced. He scored all around the wicket with his most productive shot the cover drive which fetched him 23 runs. Stand-in-captain, Ajinkya Rahane led from the front and scored his 12th Test hundred at the MCG on Day 2 of the Boxing Day Test putting India in the driver’s seat as they look to bounce back and level the four-match series. Rahane came in to bat under pressure at 61 for 2 and remained unbeaten on a magnificent 104 off 200 deliveries forging a match-changing 104-run undefeated stand with Ravindra Jadeja. India led by 82 with five wickets in hand at the close of play on the second day in Melbourne.​

The feature of Rahane’s performance was his patience and calm and composure at the crease. He weathered the initial storm with Cheteshwar Pujara and Hanuma Vihari playing out time and overs wearing down the Australian quicks. Even though runs were hard to come by he ensured that India did not lose quick wickets. He later pressed on the accelerator and increased the tempo in his partnerships with Rishabh Pant and Jadeja.

Rahane got a couple of reprieves from the Australian fielders but barring that he was in control of his innings for as much as 86% of the deliveries he faced. He scored all around the wicket with his most productive shot the cover drive which fetched him 23 runs. 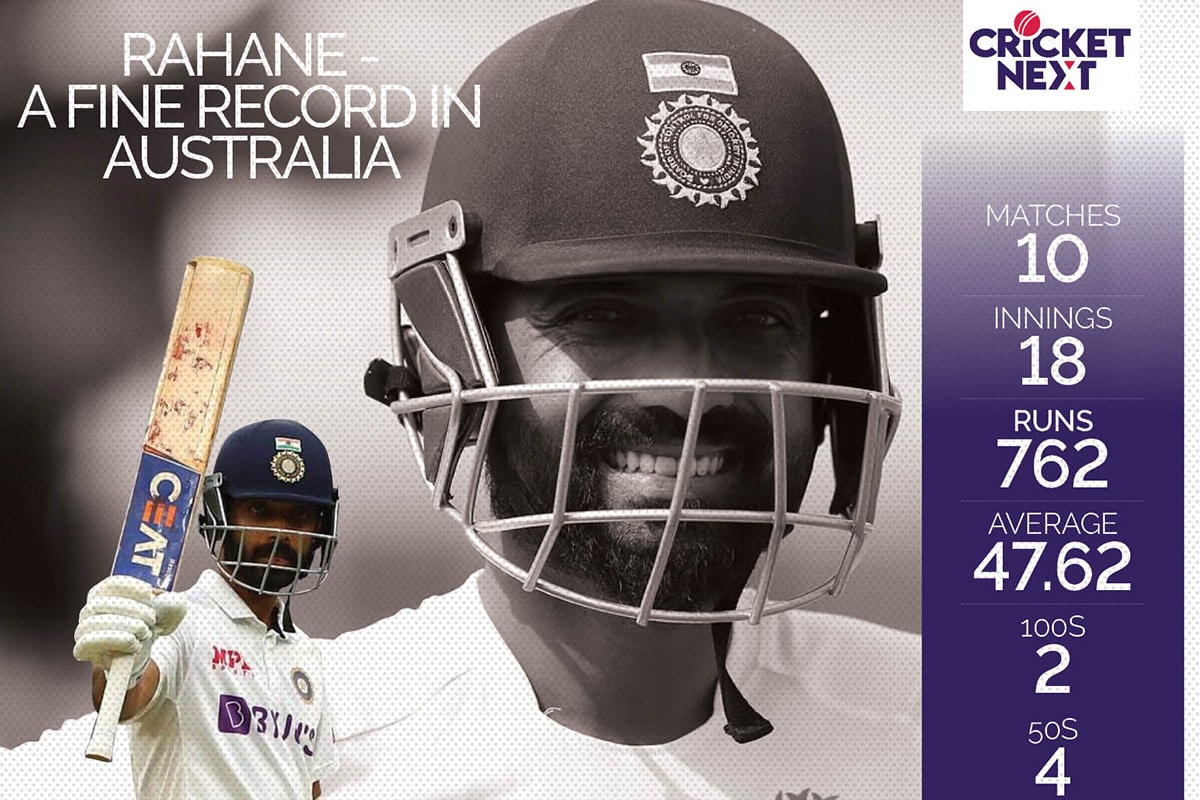 Rahane had a very interesting career till the end of the Sri Lanka tour in August, 2017. Unlike most batsmen from the sub-continent, he had better numbers away than in his own country. Rahane had scored 992 runs in 16 Tests in India at an average of 39.68 including three hundreds and as many fifties. But had an aggregate of 1817 runs in 24 Tests at an average of 53.44 with 6 hundreds and 9 fifties outside India.

His record in SENA (South Africa, England, New Zealand and Australia) considered to be a benchmark for Asian batsmen was outstanding until this period. Rahane had an aggregate of 1069 runs in 13 Tests at an average of 48.59 including 3 hundreds and 6 fifties in SENA – given that he batted between positions 5-7, these numbers were very impressive. A second innings 96 in one of the toughest pitches in world cricket with India’s back to the walls in the Boxing Day Test in Durban in 2013 followed by a magnificent 118 off just 158 deliveries at the windy Basin Reserve in Wellington a couple of months after against an attack comprising of Trent Boult, Tim Southee and others, a match-winning 103 off 154 deliveries from 86 for 3 when the top order had failed at Lord’s in the summer of 2014 and finally a fluent 147 off just 171 deliveries at the MCG in the Boxing Day Test in 2014 – Rahane had left a stamp of his class and authority in all the 4 countries.

But there was a slump in his numbers in SENA between January, 2018 till the Day and Night series opener in Adelaide in the ongoing series Down Under in 2020. During this period, Rahane in exactly the same number of Tests (13) and innings (25) in the period before, scored just 664 runs at an average of 26.56 with no hundreds and only 4 fifties. When at his best, Rahane is an attacking batsman who scores at a fair clip – his strike rate of just 42.13 was another indicator of his struggle in SENA during this time-frame. Day 1 belonged to Rahane – the captain – a masterstroke in introducing R Ashwin as first-change as early in the 11th over of the innings over Mohammed Siraj, the change of bowlers, attacking field placements, encouragement to debutant Siraj which brought out the best in him, the way he used Jasprit Bumrah and the tactics and strategy which saw a number of Australian batsmen get caught close to the bat on the leg side. Similarly, Day 2 has been owned by Rahane – the batsman. He produced his finest overseas performance – an innings under pressure – of grit, determination and class showcasing an excellent temperament and mental toughness leading India’s fightback after the drubbing in Adelaide.