Nathan Lyon will become the 13th player for Australia to play 100 Test matches when he takes the field against India in the series decider at The Gabba in Brisbane.

India and Australia will clash in the big series decider at The Gabba from the 15th of January. After the humiliating defeat in the Pink Ball opener at the Adelaide Oval, India have shown character and resolve to win at Melbourne and then draw in Sydney. But Brisbane will be a tough one to conquer for the visitors - not only have they never won at the venue but are also severely depleted with several team members either out of the series with an injury or half fit and carrying a niggle. Nathan Lyon will become the 13th player for Australia to play 100 Test matches when he takes the field against India in the series decider at The Gabba in Brisbane on the 15th of January. Lyon is the third-highest wicket-taker in Australia’s illustrious Test cricket history after Shane Warne and Glenn McGrath. He has picked 396 wickets in 99 Tests at an average of 31.98 and strike rate of 63.9 in his career.

4: Number of Wickets Needed by Lyon to Reach 400-Club

Nathan Lyon is just 4 wickets away from reaching the 400-Club in Test cricket. If he reaches the landmark in Brisbane, he will join the famous five of Muttiah Muralitharan, Shane Warne, Anil Kumble, Rangana Herath and Harbhajan Singh as the spinners in the Club.

9: Number of Wickets Needed by Lyon to Reach 100 Wickets Against India

Nathan Lyon has bagged 91 wickets - the most for him against any particular opposition - in 21 Tests at an average of 34.25 and strike rate of 64.6 including 7 five-wickets in an innings and one ten-wicket haul in the match against India. He is the fourth-highest wicket-taker in Tests against India after James Anderson (110), Muttiah Muralitharan (105) and Imran Khan (94). 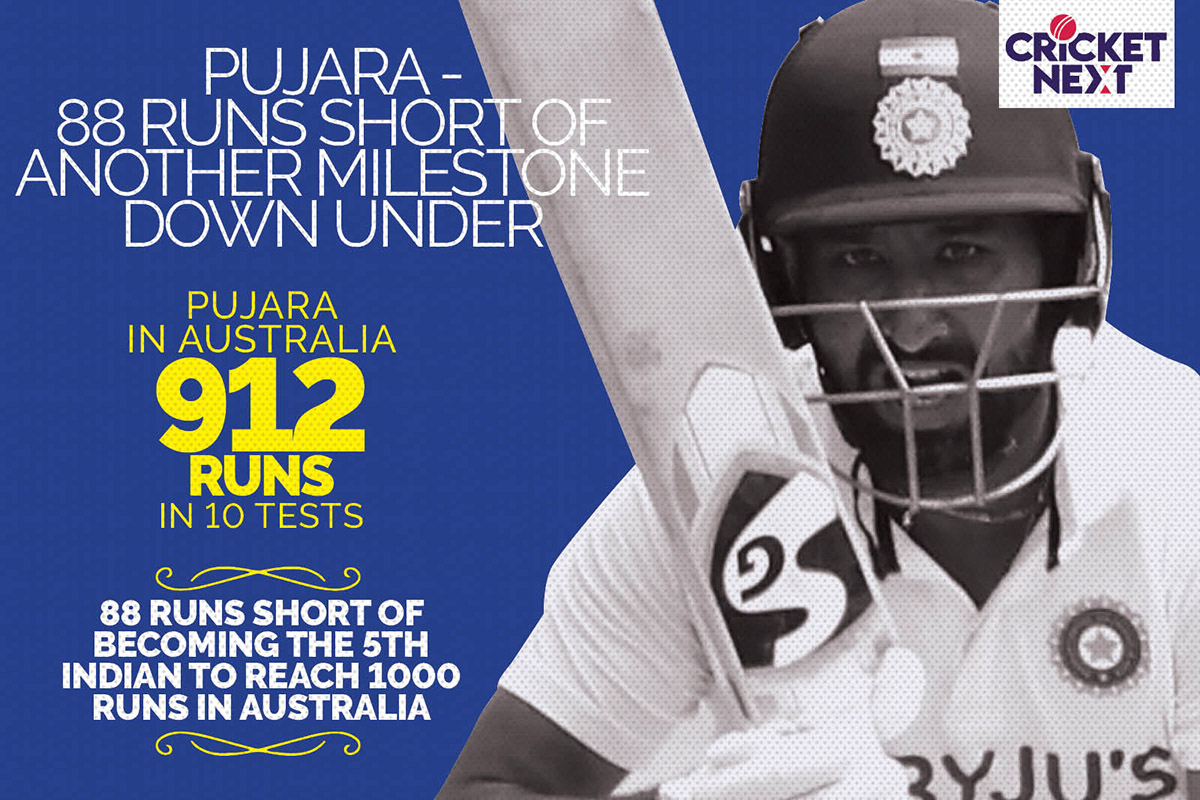 88: Number of Runs Required by Pujara to Reach 1000 Runs in Australia

Cheteshwar Pujara has an aggregate of 912 runs in just 10 Tests (19 innings) in Australia at a batting average of 48 including three hundreds and 4 fifties. If he achieves the feat in Brisbane he would be the fifth Indian to do so after Sachin Tendulkar, Virat Kohli, VVS Laxman and Rahul Dravid. Pujara, the hero for India in the 2018-19 triumph Down Under, has had a quiet series in 2020-21 aggregating just 190 runs in 3 Tests at an average of 31.66 with no hundreds and two fifties.

177: Number of Runs Required by Rahane to Reach 1000 Runs in Australia

Ajinkya Rahane has an aggregate of 823 runs 11 Tests (21 innings) at an average of 43.31 in Australia. His exploits include two hundreds and 4 fifties. India’s stand-in-captain registered a great hundred in the victory at the MCG but has not done much otherwise in the series. He has an aggregate of 207 in 6 innings, 112 of which were scored in one innings in Melbourne.

32: Number of Years Since Australia Have Not Lost a Test at The Gabba

The last time an Australian Test team was beaten in Brisbane was in November, 1988 when the great West Indian team captained by Sir Viv Richards beat them by 9 wickets at the venue. From 1990, Australia has played 30 Tests in Brisbane and won as many as 24. They have drawn 6 but not lost a single match at the venue in these 30 years. Australia’s win-loss ratio in Brisbane of 5 is not only their best at any home venue but also the fourth-best for any home venue for any country in Test cricket history (min. 10 Tests at the venue). Pakistan tops the charts with 22 wins and just 2 losses in 42 Tests at the National Stadium in Karachi. SuperSport Park at the Centurion follows, with interestingly, Mohali in Chandigarh at number 3.

0: Number of Tests India Have Won at The Gabba

The Gabba in Brisbane is the only venue in Australia where India has played more than one Test and not won a single match. India has lost 5 of the 6 matches in Brisbane. It managed to draw the encounter in 2003.

183: Number of Runs Warner Needs to Reach an Aggregate of 1000 in Brisbane

David Warner has a great record at The Gabba. He has scored 817 runs in just 8 Tests (14 innings) at an average of 68.08 including 4 hundreds at the venue. Australia has won all the 4 Tests when Warner has registered a hundred in Brisbane.

579: Smith’s Aggregate at The Gabba

Steven Smith has a brilliant record at The Gabba with an aggregate of 579 runs in 6 Tests (10 innings) at an average of 64.33 including 3 hundreds at the venue. He was the Player of the match when India last clashed with Australia at The Gabba in 2014. Smith, captaining the side, scored 133 in the first innings.

248: Number of Runs Needed by Labuschagne To Reach 2000 Runs in Test Cricket

Marnus Labuschagne has had a phenomenal start to his Test career and has scored 1752 runs in 29 innings at an average of 60.41. If he has a great Test at The Gabba he will become the second-fastest in the history of Test cricket to reach 2000 Test Runs. Labuschagne would have reached the landmark in a maximum of 31 innings. Don Bradman reached the milestone in 22 innings while George Headley took 32 inn