Home » Cricket Home » News » India vs Australia: Bruised, Broken, Wounded - Does India Have An XI To Field At The Gabba?
7-MIN READ

India vs Australia: Bruised, Broken, Wounded - Does India Have An XI To Field At The Gabba?

Jasprit Bumrah was ruled out of the decider in Brisbane with an abdominal strain. His injury comes as a huge blow for India already broken and bruised with several of their leading players out of the series due to injuries. It also means that India will be without any member of their famous pace quartet in Brisbane.

Ace Indian speedster, Jasprit Bumrah, was the latest entrant on the injury list which has marred their tour Down Under in 2020-21. In what is the biggest blow to the team since their arrival in Australia, Bumrah will miss the decider in Brisbane due to an abdominal strain. Bumrah has been the lead fast bowler for India on the tour and had so far picked 11 wickets in the 3 Tests at an average of 29.36. He has a phenomenal record in Australia and India will sorely miss his services.

IND vs AUS: Jasprit Bumrah Ruled Out of fourth Test at Brisbane Due to Abdominal Strain

The non-availability to Bumrah means that India will now be without their famous pace bowling quartet at The Gabba - which is known to be a paradise for fast bowlers. It is this quartet, regarded amongst the best in the world, which has played a pivotal role in India’s success across formats in the last few years.

India lost Ishant Sharma prior to the start of the series. The lanky fast bowler had suffered a side strain injury during the Indian Premier League (IPL) 2020 in UAE and wasn’t fit enough to go through the rigour of an overseas Test series. Ishant had completely transformed his Test career and was one of the best strike bowlers in world cricket since 2018. In these three years, he had picked 71 wickets in 18 Tests at an average of 19.14 and strike rate of 41.7.

The visitors then lost Mohammed Shami who was ruled out of the series after being hit by Pat Cummins in the forearm in the second innings in Adelaide. Shami has been the leading wicket-taker amongst Indian fast bowlers with 99 wickets in 25 Tests at just 22.86 apiece between 2017-19. The standout characteristic of his bowling during this period has been the strike rate.

It got from bad to worse. Umesh Yadav suffered a calf injury during the Australian second innings in Melbourne and was ruled out of the match and series. Yadav had also been in brilliant wicket-taking form since 2018 and had picked 49 wickets in just 12 Tests in the last three years. His strike rate of 35.1 was the best in the world amongst fast bowlers in this time-frame.

To add to India’s bowling woes, R Ashwin, one of the heroes with the bat in the marathon save at the SCG had considerable back pain the night before the final day’s play and reports are still awaited for his fitness for The Gabba.

The injury concerns for India were not restricted to the bowlers only. Rohit Sharma was not available for the first two Tests. India were already without the services of their batting superstar and captain, Virat Kohli for the last three Tests of the series - Kohli was unavailable due to a personal leave. KL Rahul suffered a wrist injury in the nets in Sydney and Ravindra Jadeja dislocated his thumb at the SCG - both were ruled out of the series. Rishabh Pant suffered an elbow injury in the first innings but overcame pain to produce his best Test knock in the second.

Unconfirmed reports now suggest that Hanuma Vihari, who suffered a hamstring tear while taking a run in his match-saving knock in Sydney, will also not be part of the playing XI in Brisbane. India will also be sweating over the fitness of Mayank Agarwal who was hit in the nets in Melbourne.

So, the big question is does India have a fit XI to field at The Gabba, where they have never won a Test in their history?

Let us explore the possible options.

The openers are sorted - Rohit Sharma and Shubman Gill will bat at the top of the order for India. No problem at number 3 either - The New Wall, Chesteshwar Pujara will occupy that position and will be followed by stand-in-skipper, Ajinkya Rahane at 4. Rishabh Pant, in all likelihood, will play in Brisbane and bat at number 5.

But due to his elbow injury he may not be given the additional burden of keeping wickets which implies that Wriddhiman Saha will play as a specialist keeper. This may not be a bad strategy for India as Saha is the more accomplished keeper, is excellent behind the wickets to fast bowling and Brisbane will offer a lot of pace and carry and bounce with potentially a number of chances behind the wickets.

India will have to play R Ashwin even if he has a back niggle. They cannot not play without the pace quartet and their leading spinner - who is also the team’s leading wicket taker on the tour. So the first 7 positions are decided. Now the million dollar question! Who will lead India’s pace attack? Who will replace Jadeja? Mohammed Siraj and Navdeep Saini will retain their places from Sydney. It is almost certain that Shardul Thakur will come in to replace Bumrah. The right-arm fast medium bowler can swing the new ball and has a lot of experience being a seasoned campaigner for Mumbai in first-class cricket. He has picked 206 wickets in 62 first-class matches at an average of 28.55 and strike rate of 54.1.

The last spot will be a toss up between a debut for T Natarajan or a recall for Kuldeep Yadav. Natarajan has been very impressive in limited-overs cricket but does not have the experience of playing too many matches in first-class cricket. Of course, he brings in variety and an element of surprise into the attack. Also, there is no better venue in Australia for a fast bowler to make his debut than Brisbane. Kuldeep, on the other hand, has played for India in whites and also has the experience of playing Test cricket in Australia - he picked a fifer in Sydney in 2019. He also adds variety to the attack with his ‘Chinaman’. 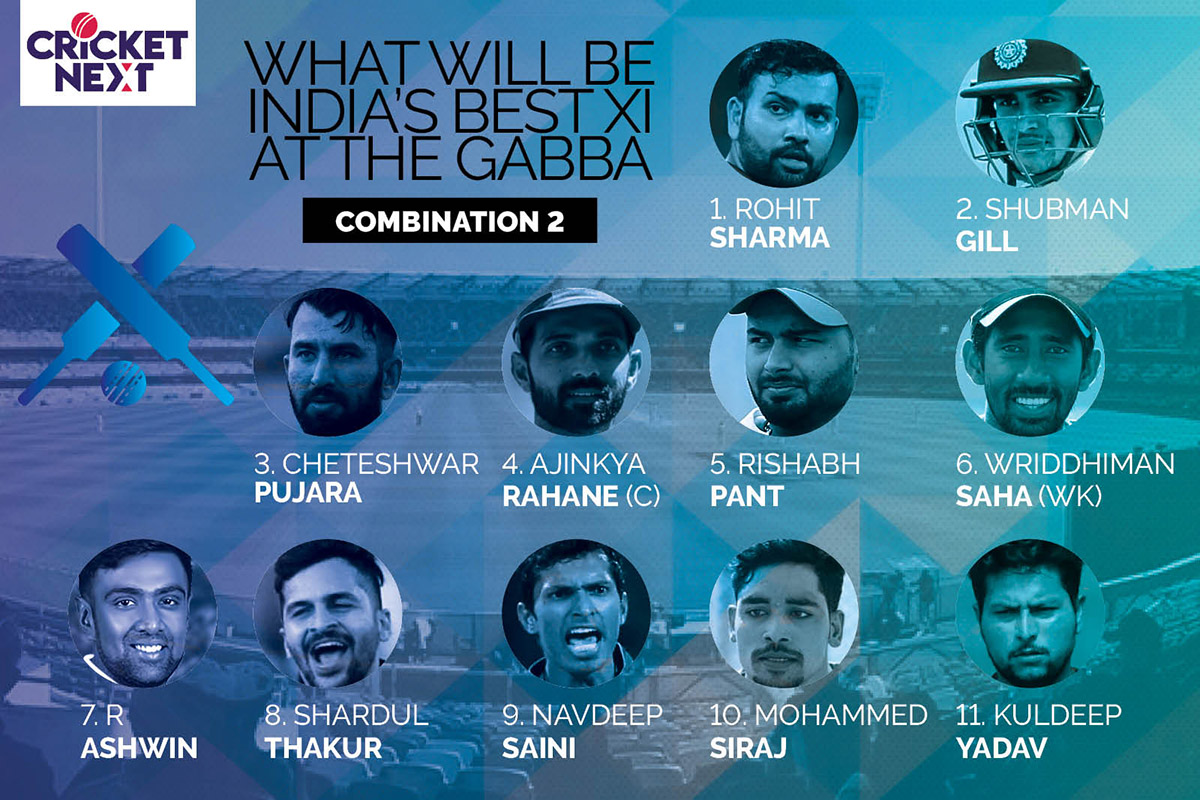 The above XI might be slightly weak in the batting department and with The Gabba widely regarded as the most difficult Australian wicket to bat on, India might want to bolster their middle order. In that case, they may draft in Mayank Agarwal in the playing XI but play him in his usual position as an opener along with Shubman Gill. That will allow the experienced Rohit Sharma to bat at number 5 which may not be such a bad thing.

Yes, ideally India will not like to disturb their new opening pair of Rohit-Gill who gave them two half-century stands in Sydney, but these are not ideal times. Also, Brisbane will offer a lot more purchase to the Australian quicks and it might be a better strategy to protect Rohit from the new ball and bat him in the middle order. In such a scenario, Pant will also play the additional role of wicket-keeper. There is a third possibility in which given the conditions in Brisbane India might decide to go in with just one spinner. In this case, T Natarajan will make his Test debut and Kuldeep Yadav will sit out. This is an unprecedented situation for Indian cricket. Never before, in the recent memory at least, has India lost so many players on a tour to injury. The only other tour which comes close is England 2011 but Australia 2020-21 has beaten that hands down! The travel restrictions due to the Covid-19 pandemic together with strict quarantine practices make it impossible for reserves to be called in between the tour.

To cover for this India had travelled with a huge contingent to Australia. Still, they are in a real danger of not having a fit XI to field in Brisbane. There are still 3 days to the Test. If the pattern of India’s ill-luck with injury continues, Ravi Shastri might have to pad up for the country come The Gabba on the 15th!