Back to News18
Home » Cricket Home » News » India vs Australia: Can India Breach Fortress Gabba, Where Australia Are Undefeated for Over 32 Years?

India vs Australia: Can India Breach Fortress Gabba, Where Australia Are Undefeated for Over 32 Years?

Australia have not lost a Test at The Gabba for more than 32 years. The last time an Australian Test team was beaten in Brisbane was in November, 1988. India has lost 5 of the 6 matches they have played in Brisbane and never won at the venue. 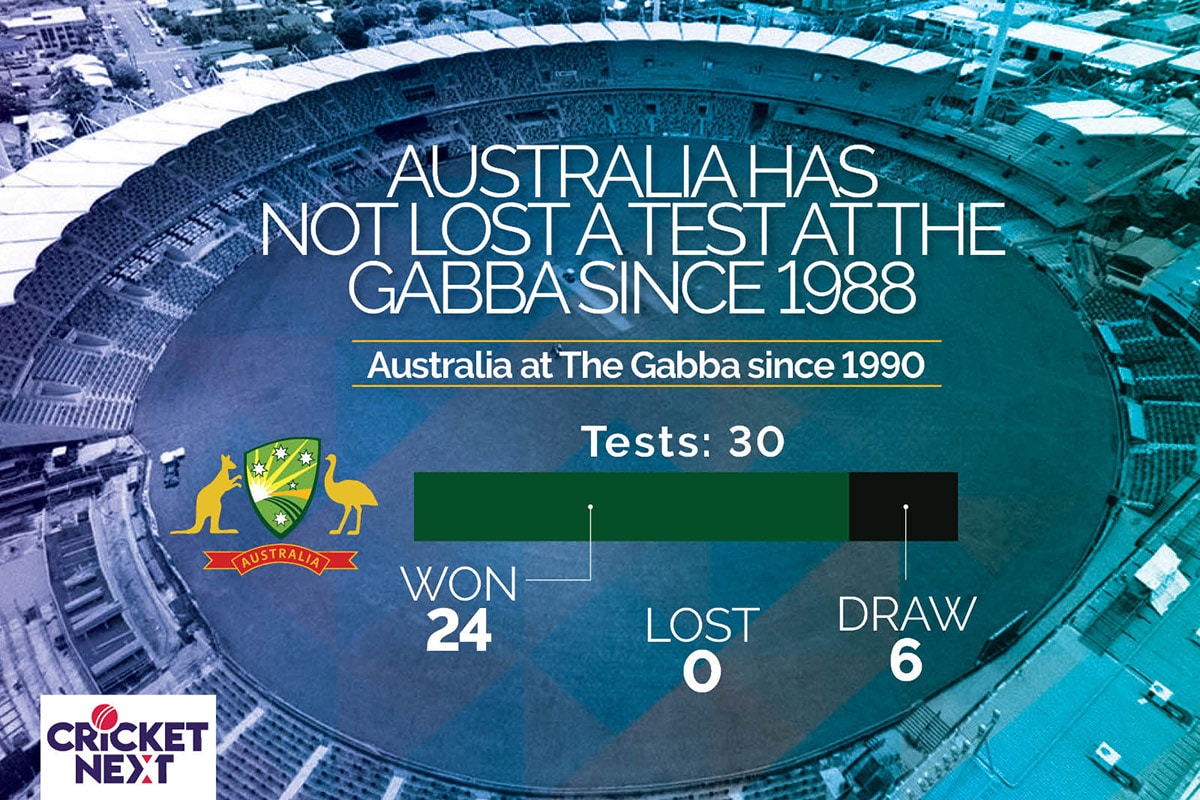 Most Test playing nations have a fortress, or a bastion where they have a stronghold dominating visiting teams for years even decades. There are a few such home fortresses all over the world. SuperSport Park at Centurion (South Africa), Edgbaston (England), National Stadium in Karachi (Pakistan), Mohali in Chandigarh (India) and Galle International Stadium (Sri Lanka) are few of the famous home venues that have dominated opposition teams over decades.

India vs Australia: Bruised, Broken, Wounded - Does India Have An XI To Field At The Gabba?

There is one another, which according to numbers has been the most difficult home fortness to breach for any opposition team in the world. The Gabba in Brisbane has been Australia's 'den' over the last three decades. They have not lost a Test at The Gabba for more than 32 years! The last time an Australian Test team was beaten in Brisbane was in November, 1988 when the great West Indian team captained by Sir Viv Richards beat them by 9 wickets at the venue. Curtly Ambrose, Courtney Walsh and Malcolm Marshall were the heroes with the ball while Gordon Greenidge, Richie Richardson and the skipper himself made significant contributions with the bat. Thus, it took an all-conquering and unarguably the greatest Test team of all-time to beat the Australians in Brisbane! That is how difficult it is to face Australia at The Gabba. Australia started their world domination overthrowing the West Indies in 1995. They dominated world cricket for the next 15 years. The Gabba represented the pinnacle of their success. From 1990, Australia has played 30 Tests in Brisbane and won as many as 24. They have drawn 6 but not lost a single match at the venue in these 30 years.

Apart from the wins themselves, it is the margin of victories and the sheer audacity of some of the Australian performances in Brisbane which makes it a daunting challenge for any opposition to overcome the hosts at the venue. 8 of these 24 wins in this time-period have been innings' victories, 3 with a margin of win above 300 runs, 2 with a margin between 200 and 300 and 4 with a margin between 100 and 200. There have also been 4 victories with 10 wickets in hand and one with 9.

There have been only two relatively closely fought contests (amongst the wins for Australia) between a visiting team and Australia at The Gabba. One of them involved India who gave the home team a minor score in 2014. Chasing 128 for a win, Australia had a few hiccups and anxious moments before overhauling the target with 4 wickets in hand. Murali Vijay scored 144, Ajinkya Rahane recorded 81 in the first innings for India while Shikhar Dhawan registered 81 in the second.

Asad Shafiq then produced one for the ages in the Day and Night Test at The Gabba in 2016 when chasing a mammoth 490, he scored a magnificent 137 giving Pakistan a fighting chance before they were bowled out for 450.

Overall, Australia have played 62 Tests in Brisbane and won as many as 40 losing just 8. There have been 13 draws and a historic tie - only one of the two in Test history - in 1960. Australia's win-loss ratio in Brisbane of 5 is not only their best at any home venue but also the fourth-best for any home venue for any country in Test cricket history (min. 10 Tests at the venue). Pakistan tops the charts with 22 wins and just 2 losses in 42 Tests at the National Stadium in Karachi. SuperSport Park at the Centurion follows, with interestingly, Mohali in Chandigarh at number 3.

India have a poor record at The Gabba. It is the only Australian ground (not counting the new Perth Stadium) where they have played and not won a single Test match. They have lost 5 of the 6 matches they have played at the venue. While two of these losses have been by huge margins (innings and 226 runs in 1947 and 10 wickets in 1991), the other three have been comparatively tighter contests. Chasing an improbable 395 in the 4th innings, India, led by Mansur Ali Khan Pataudi made a match of it in 1968. The hero of the chase was Motganhali Jaisimha who scored a brilliant 101. India had reached 310 for 5 before the wicket of Chandu Borde led to a collapse and they were bowled out for 355. The visitors came very close in 1977 against a Packer-hit Australian XI. Chasing 341, India almost pulled off a remarkable win only to go down by 16 runs. Sunil Gavaskar had led India's charge with a brilliant 113 opening the innings.

Sourav Ganguly was the star with the bat in the only draw India has achieved at The Gabba. He smashed a splendid 144 off just 196 deliveries in the first innings in 2003 and with contribution from VVS Laxman (75) helped India overtake Australia's total of 323. Bad weather and bad light ultimately had the final say in the match. India, set 199 for a win in 16 overs had a few anxious moments losing their openers, Aakash Chopra and Virender Sehwag in the second over of the innings to Nathan Bracken. But Rahul Dravid and Laxman made sure there was no further damage and the match ended in a draw.

India won the Border Gavaskar Trophy in 2018-19 in Australia thus if they even manage a draw in Brisbane in 2021 they will retain the coveted trophy. But the task is cut out for the Indians as they will be without any of their four main fast bowlers with the latest addition to the injury list, Jasprit Bumrah, probably their biggest loss of the series. India is also without Virat Kohli, KL Rahul, Hanuma Vihari and Ravindra Jadeja and R Ashwin and Rishabh Pant are both carrying a niggle. They barely have an XI they can field in Brisbane.

But India, against all odds and facing adversity, have shown courage, strength and character with their win in Melbourne and the great escape in Sydney.

Do they have one more fight left in them?