Back to News18
Home » Cricket Home » News » India vs Australia - Can India Defy Numbers and History and Rise To The Occasion At The Gabba?

India vs Australia - Can India Defy Numbers and History and Rise To The Occasion At The Gabba?

It has all come down to the last day of the last Test at The Gabba. The day of reckoning will decide the winner of what has been a remarkable and memorable Test series. It has all come down to the last day of the last Test at The Gabba. The day of reckoning will decide the winner of what has been a remarkable and memorable Test series. India were down and out after the horror of 36 in Adelaide. But came back strongly showing character and resolve winning the Boxing Day Test at the MCG before producing one of the greatest resilient performances in their Test history to save the third Test at the SCG. Broken, bruised, injured with their quartet of pace bowlers and leading spinner out of the series, India fought like never before against a full fledged Australian XI to put themselves in a position where they can walk away with the Border-Gavaskar Trophy and much more if they put in what would again have to be a performance of a lifetime in Brisbane tomorrow.

The task for India is cut out. To chase more than 300 in Australia's fortress where they have not lost a Test for more than 32 years against a formidable pace attack on a wicket which is showing signs of wear and tear - it cannot get more difficult than this. Any fourth innings chase above 200 anywhere in the world, even on the most placid of wickets against the most mediocre of teams, is not an easy task. Factor in all the above and India have a few mountain peaks to climb if they are to come out on tops on the 19th of January. 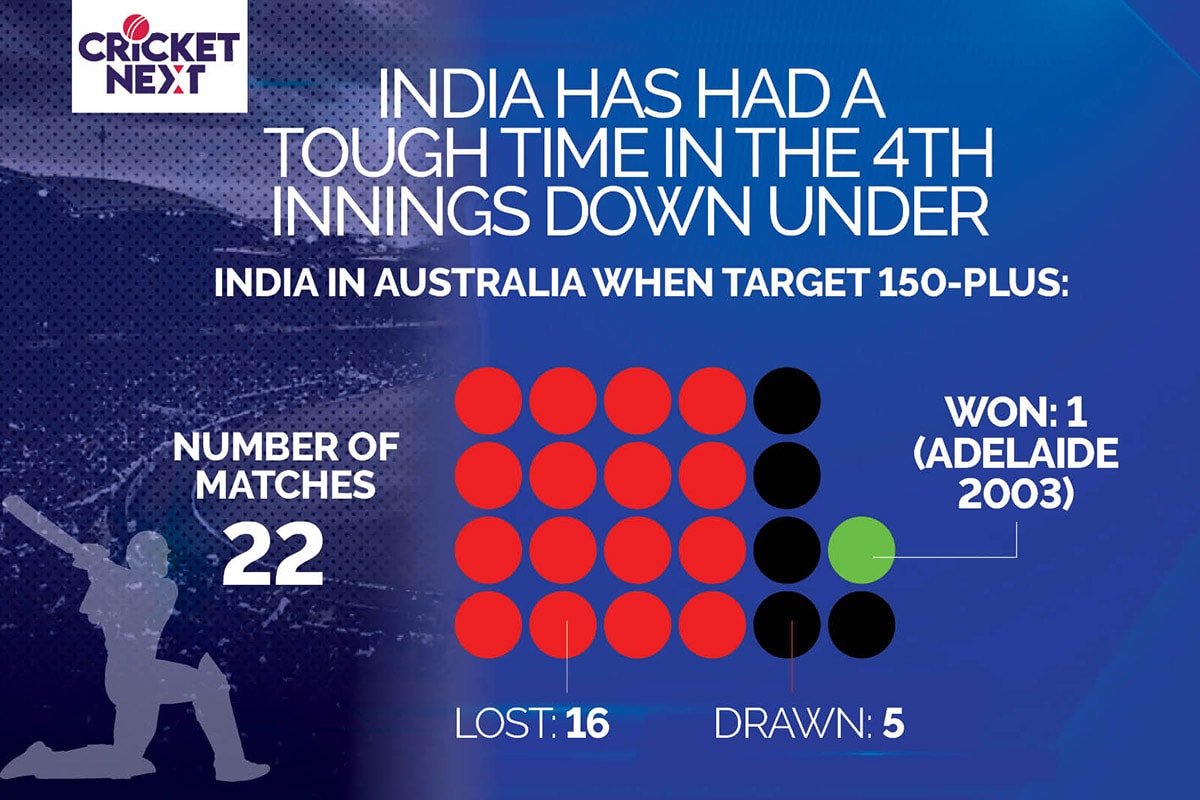 Let us go back in history and see just why this chase will be like scaling Mount Everest for India.

India have successfully chased down a target of above 300 only twice in their entire Test cricket history! That is the enormity of the challenge ahead for a batting line-up sans the services of their best batsman, Virat Kohli, KL Rahul, Ravindra Jadeja and Hanuma Vihari - three out of the four would definitely be a part of the XI if not for injuries and other personal reasons.

Sunil Gavaskar (102) and Gundappa Viswanath (112) along with Mohinder Amarnath (85) helped India chase down a record target of 403 against the West Indies in Port of Spain in Trinidad and Tobago in 1976 - the visitors registered a sensational win with six wickets in hand. A swashbuckling 83 off just 68 deliveries from Virender Sehwag coupled with an unbeaten hundred from Sachin Tendulkar and fifties from Gautam Gambhir and Yuvraj Singh took India to another famous six-wicket win against England in Chennai in 2008. The home team chased down the target of 387 in under 100 overs.

Barring the two exceptions in Port of Spain and Chennai, India have had a torrid time when set 300-plus in the fourth innings. In 80 such previous matches, they have lost on as many as 45 occasions, ie, an overwhelming 56.25%! They have held for a draw 32 times while there has been one tie - the historic Chennai Test in 1986! 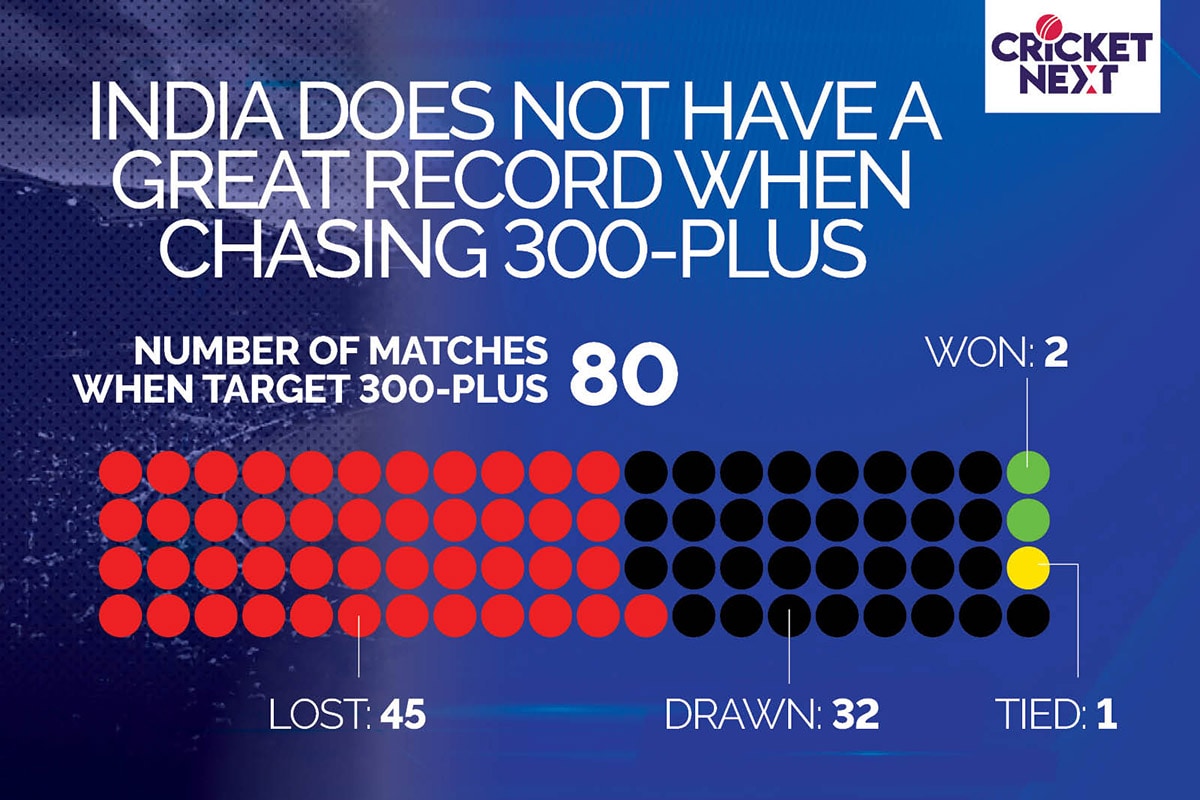 The worrying thing for India is that in as many as 39 of these 45 losses, they have been hammered in almost a one-sided contest - India has lost 39 such matches by 100 or more runs (16 with margin of defeat between 100 and 200, 15 between 200 and 300 and 8 above 300). However, there have been 6 occasions in which India did put up a fight before going down. The interesting statistic is that 5 of these 6 close losses were in Australia and two at The Gabba itself.

Chasing 341 against a Packer-hit Australia in 1977, India, inspired by the great Sunil Gavaskar who registered 113 opening the innings, fell just short going down by 16 runs at the Gabba. It remains Australia's narrowest victory of their 48 wins at the venue. India had given Australia a real scare again at The Gabba in 1968 too when Motganhalli Jaisimha registered a brilliant hundred as the visitors fought courageously in an attempt to overhaul the target of 395 falling short by 40 runs. It remains the joint second-lowest margin of win for Australia in Brisbane. This is significant when seen in perspective of how ruthlessly Australia has dominated at The Gabba.

Of their 48 victories at the venue, 13 are by an innings, 12 with a 100-plus run margin and another 15 by 7 or more wickets. In a nutshell, this implies that 40 of Australia's 48 wins in Brisbane were by massive margins in which they hammered the opposition. 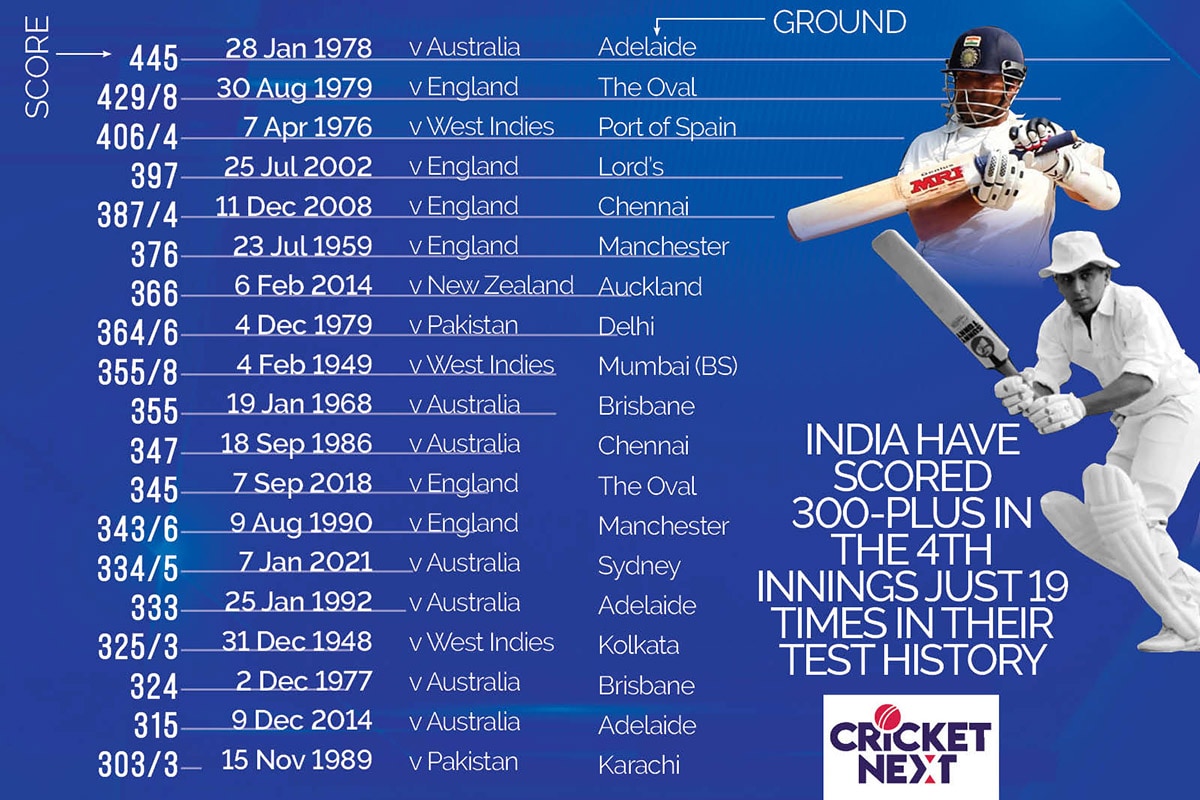 Statistics, number, history - all make Australia overwhelming favourites when play resumes on Day 5 in Brisbane. But, as they displayed at the MCG and SCG, India have defied the odds, statistics, numbers and history already on a couple of occasions in this series.

Will they be a third time lucky too?