While India might be facing an uphill battle to save the third Test at the Sydney Cricket Ground (SCG), there has been one big positive for the visitors from the match. That is the opening-wicket partnership of Rohit Sharma and Shubman Gill. The pair put together two half-century stands in both the innings in Sydney - a rarity for Indian opening batsmen overseas. 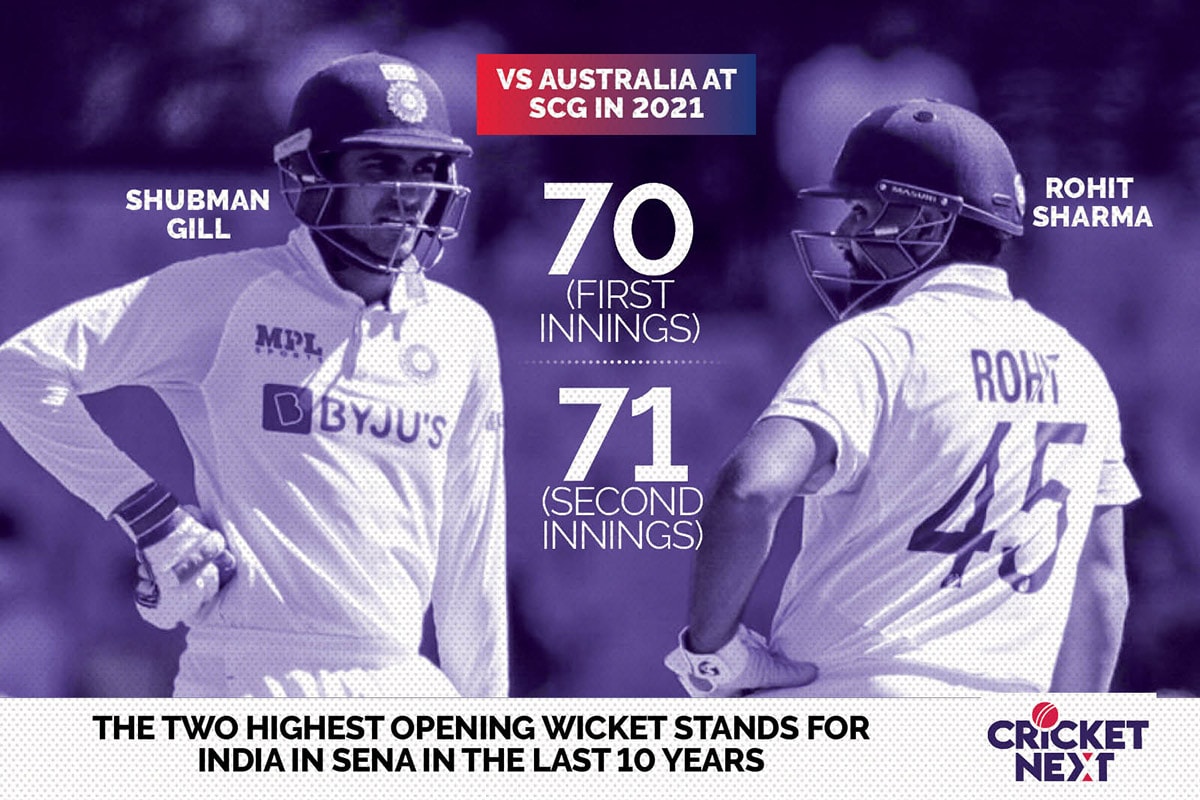 While India might be facing an uphill battle to save the third Test at the Sydney Cricket Ground (SCG), there has been one big positive for the visitors from the match. That is the opening-wicket partnership of Rohit Sharma and Shubman Gill. The pair put together two half-century stands in both the innings in Sydney - a rarity for Indian opening batsmen overseas. While at the crease, both looked at ease, had plenty of time to play the fast bowlers and played some exquisite shots all around the park. There is no better a stroke-player than Rohit when in full flow and from whatever little we have seen of Gill in his two-Test career, he appears to be an elegant and classy batsman who is almost a natural fit into the big arena. Together, they offer India a potentially great opening partnership - one that has the ability to score big runs at a rapid rate and set the tone for the rest of the match.

There have been 12 opening-wicket partnerships in the ongoing series between India and Australia so far. As many as 5 of them have not crossed 10 and as many as 9 of them have been below 20. 8 of these 12 partnerships have been broken within the first 6 overs - that is how difficult it is to face the new ball against bowlers of the quality of Pat Cummins, Josh Hazlewood, Mitchell Starc, Jasprit Bumrah, Mohammed Shami and Umesh Yadav.
Awaiting ICC's Investigation into SCG Crowd Trouble, Strongest Action to Be Taken Against Offenders - CA India tried the new opening pair of Rohit Sharma and Shubman Gill in Sydney. And it has paid rich dividends. They added 70 in 27 overs in the first innings and then came together to stitch the highest first-wicket stand of the series in the second innings - 71 in 22.1 overs. Exquisite cover-drives, sublime pull shots, delightful back-foot punches and fine flicks - the two batsmen gave a glimpse of their natural stroke-play and played the Australian pace trio with relative ease. Apart from the runs they scored and the manner in which they scored them they batted for three-fourths of a session in both the innings thereby playing out valuable time and overs with the new ball in turn protecting the middle-order from facing the music with the red cherry.
Wanted: A Fit XI for the 4th Test as India's Injury-Hit Tour Worsens
Such has been the fate of overseas openers, especially from the sub-continent over the decades Down Under that Rohit-Gill created a record with their two fifty partnerships in Sydney. It was only the third instance of an opening pair from the sub-continent putting together a half-century stand in both the innings of a match in Australia. Farokh Engineer-Abid Ali achieved the feat in 1968 in Sydney and Chandika Hathurusingha-Sanath Jayasuriya in 1996 did it in Adelaide. Imagine all the great opening pairs that have played for India, Pakistan and Sri Lanka - Gavaskar-Chauhan, Sehwag-Gambhir, Raja-Sohail, Jayasuriya-Atapattu - none of them could achieve this in Australia. 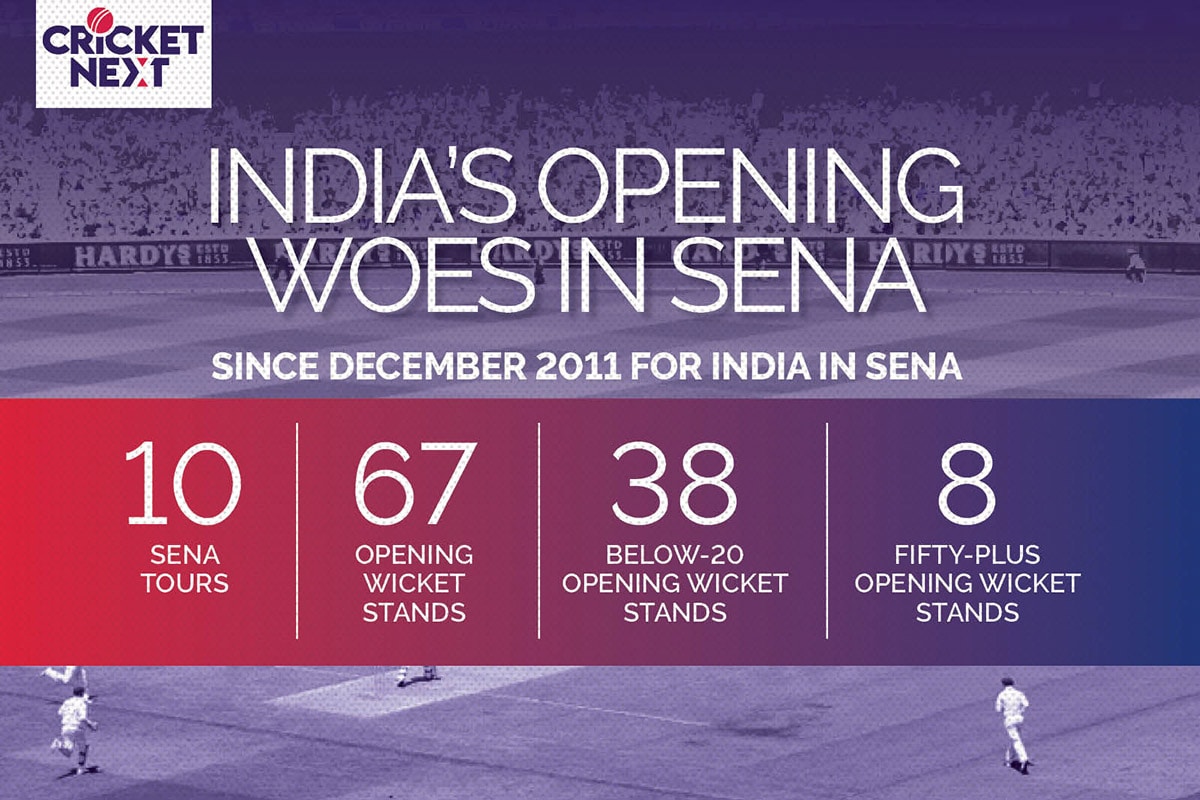 India's opening woes in Australia have been a major concern for the team. 7, 0 (Agarwal-Shaw) & 16, 0 (Agarwal-Gill) - these were the first-wicket stands for India in Adelaide and the MCG. Before SCG 2021, the Indian opening pair had not produced a half century stand in 9 innings in Australia. The last occasion when this was achieved was in Adelaide, 2018 when Murali Vijay-KL Rahul added 63 for the opening-wicket. In the 9 innings in between, the Indian opening pair had added a total of 107 runs at an average of 11.88. On an average, they played just 31 deliveries (a little over 5 overs) every innings before the partnership was broken.
Since December 2011, India have travelled four times to Australia and twice to South Africa, England and New Zealand. In 67 opening-wicket partnerships in this time period, only 8 have managed to reach 50. There have been as many as 38 below-20 stands in this period - that is how tough the conditions have been and badly the Indian openers have fared in SENA in the last 10 years.
In fact, the 70 and 71 added by Rohit-Gill in Sydney are the two highest opening-wicket partnerships for India in more than 10 years in SENA. The previous highest was 137 set by the duo of Gambhir-Sehwag against South Africa at Centurion in December, 2010. Rohit-Gill added an aggregate of 141 in the match at the SCG. It is the 10th highest aggregate for an Indian opening pair in SENA. The last time an Indian opening pair aggregated more in a match in SENA was back in July 2007 when Wasim Jaffer-Dinesh Karthik added 194 against England in Nottingham.
The 71-run stand between Rohit-Gill was also the first 50-plus opening partnership in the fourth innings for India away from home since Jaffer-Sehwag put together 109 against the West indies in Basseterre in 2006.
These numbers are important because they put things into perspective. They tell you what happened in the past and why what transpired in Sydney was so significant. But apart from what the data and the analysis tells us, there is another dimension to the Rohit-Gill partnership. Rohit is in his new avatar in Test cricket as opener. He had a brilliant 2019 from the position and now is hungry to prove a point overseas. Gill has been India's most successful batsman on tour in Australia (including the tour matches). He has a stupendous first-class record averaging almost 70. What makes the duo so threatening is their ability to score freely and score big. Rohit has got the big double hundreds in ODIs and also the one in Test cricket against South Africa in Ranchi in 2019. Gill has got the big hundreds in first-class cricket. Rohit has a strike rate of close to 60 in Test cricket while Gill's scoring rate is almost 75 in first-class cricket.
Both have the ability to dominate the best attacks in the world and change the course of a match at the top of the order for India. They can do whatever an Agarwal-Shaw partnership can potentially do and do it better. In addition, they seem to have a better temperament and technique for overseas conditions. They have the ability to score big runs at a rapid rate consistently for India, pushing the opposition bowlers on the backfoot early in the match and dictating the course of play. By scoring quickly, they can also allow the likes of Pujara, Rahane and Vihari to take their time to settle in and play their natural game without too much pressure of having to increase the tempo of the innings. On flatter tracks, by scoring at a brisk pace, they will give the Indian bowlers time to bowl the opposition out twice - something which Virender Sehwag revolutionised in the 2000s.
The Rohit-Gill opening pair and what it could possibly offer might just be the silver lining for India even if they go down at the SCG.