Back to News18
Home » Cricket Home » News » India vs Australia: Fans Dressed as Stormtroopers at The Gabba Take the Internet by Storm

India vs Australia: Fans Dressed as Stormtroopers at The Gabba Take the Internet by Storm

A large number of fans were seen dressed as Stormtroopers in their famous white attire during the second day of the fourth and final Test between India and Australia at The Gabba in Brisbane on Saturday. 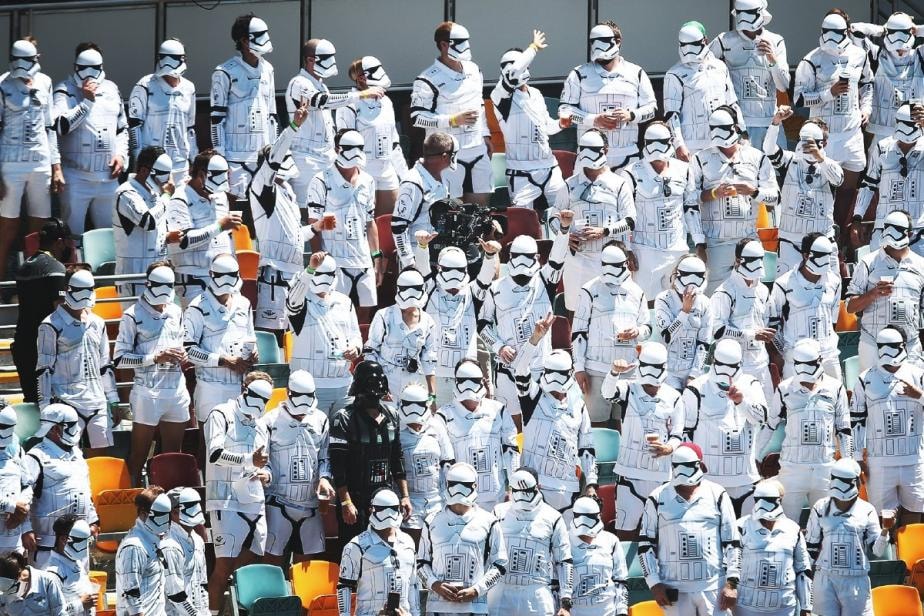 A large number of fans were seen dressed as Stormtroopers in their famous white attire during the second day of the fourth and final Test between India and Australia at The Gabba in Brisbane on Saturday. To make things better, one man was seen standing in the middle dressed in black costume of main Star Wars villain Darth Vader. "The best dress up award on day two goes to," ICC's official Twitter account tweeted along with a picture of the fans.

The fans were lauded for their creativity by many on social media.

Shardul Thakur and Washington Sundar made rearguard half-centuries as India once again showed resilience and found heroes out of nowhere to leave the final Test against Australia in Brisbane in the balance at the end of the third day.

At stumps, Australia were 21 for no loss - a lead of 54 - with David Warner and Marcus Harris in the middle.

In response to Australia's first-innings total of 369, India were at one stage struggling at 186 for 6 before Thakur and Washington shared a 123-run stand for the seventh wicket, Thakur making 67 and Washington 62.

India were eventually bowled out for 336, conceding a lead of 33, with Josh Hazlewood ending with a five-wicket haul. Pat Cummins and Mitchell Starc picked two wickets each while off-spinner Nathan Lyon, playing his 100th Test, scalped one wicket in a frustrating outing for the bowlers.

Rohit Sharma, Mayank Agarwal and skipper Ajinkya Rahane also made notable contributions of 44, 38 and 37 respectively. India batted for more than 111 overs before getting bundled out in the final session on the third day of the match.

India resumed the day 62 for 2 and looked steady in the first hour before Cheteshwar Pujara nicked Josh Hazlewood to the wicketkeeper for 25. Rahane had settled in and looked in good touch but a 'brain fade' moment cost him his wicket, as he chased a wide one from Mitchell Starc and nicked to the slip cordon before lunch.

Another brain fade moment was in order after lunch, as Mayank Agarwal slashed at Hazlewood second ball after the break to hand a catch to second slip. Agarwal had done all the hard work for his 38 but gave it away.

Rishabh Pant looked good for his 23 off 29 but fell to an avoidable shot, looking to steer a short one past gully. However, Cameron Green was in position to take a sharp catch.

That left India 186 for 6, staring at a big deficit. However, debutant Washington and Thakur resisted and counter attacked in brilliant fashion to gradually frustrate Australia and eat into the deficit.