India vs Australia: From Ravi Shastri to Sachin Tendulkar - The Best All-Round Performances in Australia

We rank the best 5 taking into consideration the context of the performance, situation of the match, relevance of match and tournament and the actual performance itself.

India and Australia will battle it out in the three-match ODI series which gets underway from the 27th of November at the SCG. There have been some memorable batting and bowling performances by Indian players in Australia over the years. But there have been very few quality all-round performances by Indians Down Under. In this piece, we rank the best 5 taking into consideration the context of the performance, situation of the match, relevance of match and tournament and the actual performance itself. 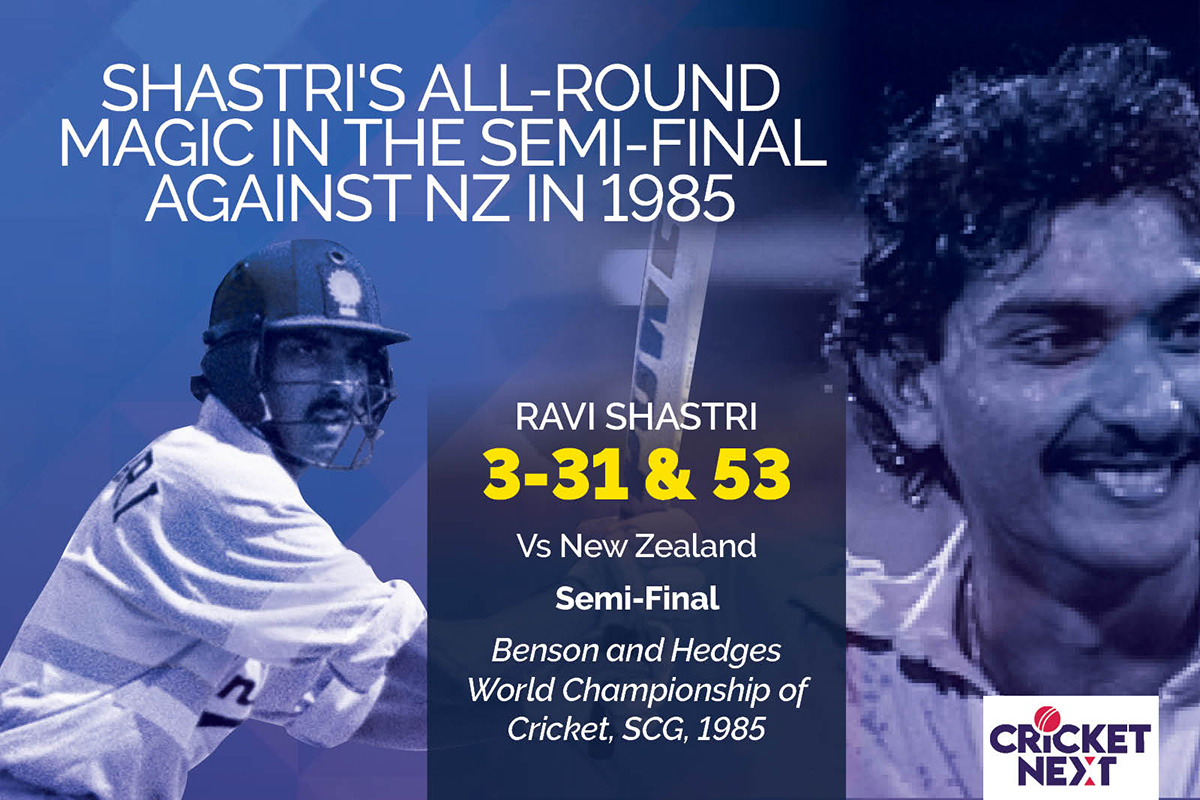 It was the big semi-final of the biggest world event in ODI cricket outside the World Cup. New Zealand had recovered well through a fifty run stand between John Reid and Jeremy Coney after being reduced to 69 for 4. India needed a breakthrough. Ravi Shastri was their man! Shastri saw the back of the highest scorer of the innings - Reid - before dismissing Coney and Sir Richard Hadlee derailing the New Zealand middle order and swinging the match back in India’s favour. He returned with 3-31 in 10 overs and New Zealand were restricted to 206.

Also Read: Brian Lara Believes This ‘Class Player’ Should Have Been in India’s Squad for Australia Series

Shastri then led the way with the bat scoring a dogged 53 off 84 deliveries opening the innings for India. He provided the platform for the likes of Vengsarkar and Kapil Dev to attack the bowling and run away with the match for India. By the time Shastri was dismissed, he had scored more than 50% of his team’s total of 102. India went on to win by 7 wickets with more than 6 overs to spare.

It was the Big Match in a big tournament - India vs Pakistan at a packed Sydney Cricket Ground in the 1992 World Cup! An 18 year old, Sachin Tendulkar showcased early signs of his greatness and top-scored for India with a classy unbeaten 54 off just 62 deliveries against the bowling of Wasim AKram, Imran Khan and Mushtaq Ahmed. India put 216 on the board.

He then returned to pick the wicket of the highest scorer of the Pakistani innings - Aamir Sohail for 62 breaking a match-threatening 88-run partnership between him and Javed Miandad. That triggered a batting collapse for Pakistan from which they could never really recover and were cleaned up for 173. Tendulkar was also very restrictive conceding just 37 runs in his 10 overs. It was India’s first ODI in Australia. And it happened to be at the iconic MCG! Sandeep Patil, on ODI debut, came out to bat under pressure at 65 for 4 and counter-attacked with 64 off just 70 deliveries. He helped India cross 200 and post 208 for 9 in 49 overs. Australia were off to a great start with John Dyson and Kim Hughes putting together 60 for the opening wicket. India needed a breakthrough. Patil, their hero with the bat, was the man with the golden arm too. He saw the back of Hughes. That triggered an Australian collapse and they were bowled out for 142. Patil was also very economical giving away just 31 runs in his 10 overs. The Indian skipper, Kapil Dev returned with 1-28 in 10 overs and was by far the most restrictive of the Indian bowlers - a quintessential Kapil Dev quality in ODI cricket - as New Zealand posted a stiff 259 for 9 at The Gabba. Kapil then showed his prowess with the bat. Building on the great start given by Srikkanth, Gavaskar and Amarnath, he hammered an unbeaten match-winning 54 off just 53 deliveries to take India to a splendid five-wicket win with two overs to spare.

Kapil Dev walked out to bat under pressure at 84 for 5 and hammered a scintillating 75 off 51 deliveries smashing 9 fours and 3 sixes at the massive MCG. Kapil’s effort saved India the blushes and they posted 204. He then gave India the initial breakthrough ending a 67-run opening stand getting rid of John Wright for 42. India made a match of it and ran New Zealand close but ultimately were beaten by three wickets with just two balls remaining.