India vs Australia: From The Oval 1971 to The Gabba 2021 - India's Greatest Series Wins in History

India vs Australia: From The Oval 1971 to The Gabba 2021 - India's Greatest Series Wins in History

Not only did India breach Australia's fortress where they were undefeated in over 32 years but also went on to win the series 2-1 - recording their second successive series win in Australia. We look back at five of India's greatest series wins in their Test history.

India beat Australia by three wickets chasing down 328 in a thriller at The Gabba on the 19th of January. Not only did India breach Australia’s fortress where they were undefeated in over 32 years but also went on to win the series 2-1 – recording their second successive series win in Australia. The win in Brisbane was one of India’s greatest Test match wins in history and the series victory their greatest in their Test history.

We look back at 5 of India’s greatest series wins in their Test cricket history.

Farokh Engineer (63) and Ajit Wadekar (80) helped India gain a nine-run lead in the first innings in the series opener in Dunedin overhauling New Zealand’s total of 350. Chasing 200 in the fourth innings, India were in early trouble at 49 for 2 before a century partnership between Rusi Surti (44) and Wadekar (71) not only resurrected the innings but set the platform for a historic five-wicket win for India – their first away win in their Test history!

New Zealand came back and won the second Test at Christchurch to level the series at 1-1. Erapalli Prasanna’s fifer kept the hosts to below 200 in the first innings at the Basin Reserve in Wellington. India’s hero from Dunedin, Wadekar again rose to the occasion and produced a masterclass 143. India took a massive first innings’ lead. Bapu Nadkarni bagged 6 wickets in the second innings as New Zealand were bowled out for 199. India chased down the target of 59 with 8 wickets in hand. Prasanna picked 8 wickets in the match and with significant contributions from the bat from Tiger Pataudi, Rusi Surti and Chandu Borde took India to a massive 272-run win in the fourth and final Test in Auckland. India had won a historic series – their first overseas victory.

The first Test at Lord’s ended in a thrilling draw as India chasing 183 for a win ended with 145 for the loss of 8 wickets. The second Test at Old Trafford ended in a rather timid draw. It was all to play for in the decider at The Oval.

England, batting first, scored 355 in the first innings. A number of the Indian batsmen got starts but none converted them into a substantial score – Wadekar, Dilip Sardesai, Eknath Solkar and Farokh Engineer – all scored in the 40s and 50s. India were bowled out for 284.

But then an inspired bowling performance by leg-spinning maverick, Bhagwath Chandrasekhar (6-38 in 18.1 overs) helped India skittle England for just 101. There were a few hiccups in the chase but with solid contributions from Wadekar (45), Sardesai (40) and Gundappa Viswanath (33), India overhauled the target of 173 with 4 wickets in hand. It was India’s first series win on their seventh tour to England. It was indeed Lucky 7!

This was, by far, the greatest three-Test series in the last 75 years of Test cricket history between any two teams anywhere in the world. A world-beating Australian side led by the great Steve Waugh was clashing with India in a three-Test series. The Australian side consisted of all time greats like Hayden, Ponting, Gilchrist, the Waugh brothers, Warne, McGrath and Gillespie.

A poor batting performance by India coupled with hundreds from Matthew Hayden and Adam Gilchrist gave Australia the lead with a 10-wicket win in Mumbai.

And then the unthinkable happened! India became only the third country in Test cricket history to win a Test after following on. After being bowled out for 171 in reply to Australia’s 445 at the Eden Gardens in Kolkata, India through a record-breaking 376 run partnership between Rahul Dravid (180) and VVS Laxman (281) posted 657 in the second innings setting Australia 384. Harbhajan Singh then returned with 6-73 in 30.3 overs to bowl out Australia for 212. It was one of the greatest wins in Test cricket history against one of the greatest sides to play Test cricket. 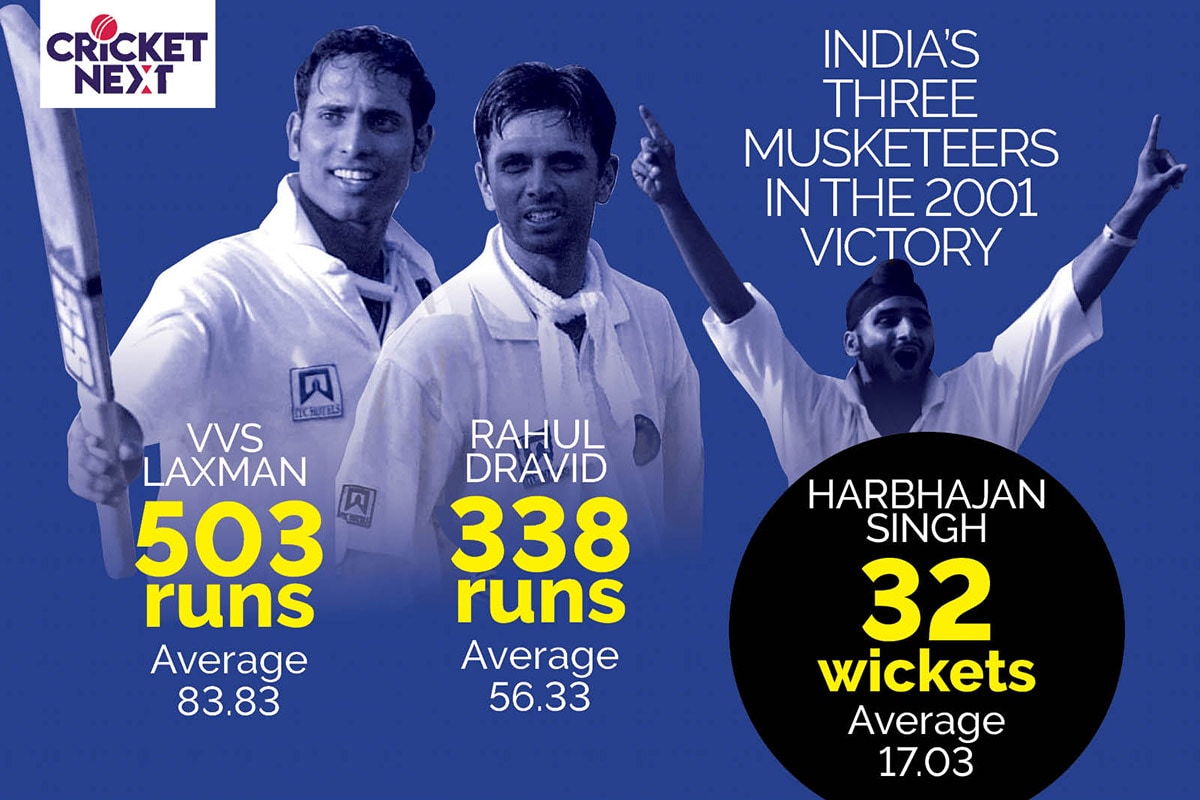 Inspired by their once in a generation performance in Kolkata, India beat Australia by two wickets in a thriller in the decider in Chennai. Harbhajan Singh rose to the occasion once again and picked 15 wickets in the Test – seven in the first innings and eight in the second. India made heavy weather of the chase and from 101 for 2 were reduced to 135 for 7 before scraping through by two wickets. VVS Laxman, India’s crisis man, was the star with the bat in the second innings with a fine 66 under pressure. Sachin Tendulkar had produced a masterclass hundred in the first innings.

The win transformed Indian cricket and was one of the most glorious moments of their Test history.

India vs Australia: Australia Weren’t Playing to Win; They Were Scared to Lose, Says Michael Clarke

India’s first series win in Australia, on their 12th tour, was a historic victory for the visitors made possible by two outstanding performances. Cheteshwar Pujara scored 521 runs in 7 innings registering three hundreds and was the standout batsman in the series. Jasprit Bumrah was the highest wicket-taker for India in the series with 21 wickets in 4 Tests at an average of 17 and strike rate of 44.9. Mohammed Shami played his part with the ball too and returned with 16 wickets.

India won the series opener in Adelaide by 31 runs but Australia came back strongly to level the series at Perth. A fine batting performance in the first innings at the MCG again led by a hundred from Pujara coupled with a six-for by Bumrah gave India the ascendancy in the Test which they went on to win by 137 runs. 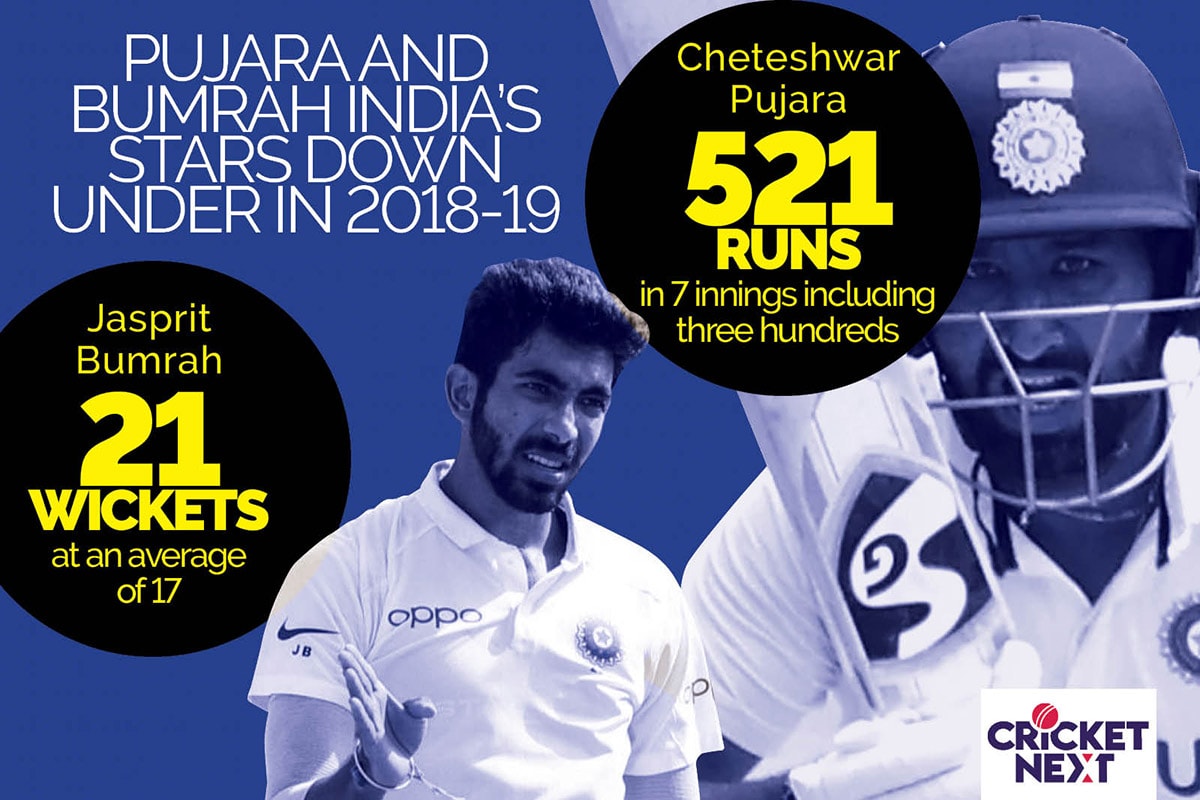 Big hundreds from Pujara and Pant helped India to a mammoth 622 in the first innings in the fourth and final Test at the SCG. That was enough to ensure a draw and with that a memorable first series triumph Down Under for India.

This triumphs India’s first series win Down Under in 2018-19. After being bowled out for 36 – their lowest Test score in history in Adelaide – India, without the services of their captain and superstar batsman, Virat Kohli and leading strike bowler, Mohammed Shami, went on to register a sensational comeback win in the Boxing Day Test at the MCG. Led by the stand-in-captain, Ajinkya Rahane who registered a hundred and fine bowling performances by Jasprit Bumrah, R Ashwin and debutant, Mohammed Siraj, India beat Australia by 8 wickets to level the series.

Injuries and more injuries meant that India were without KL Rahul and Umesh Yadav for the SCG Test. Against all odds, adversities, quarantine protocols, a hostile Australian media and crowd, Chesteshwar Pujara, Rishabh Pant, Hanuma Vihari and R Ashwin produced the performances of a lifetime with the bat and saved the Test for India.

Further depleted with none of their pace quartet or leading spinners in the XI, India, with a once in a lifetime effort from Pujara and Pant breached fortress Gabba where Australia hadn’t lost a Test in 32 years. They chased down 328 in a thriller with just three wickets in hand in the dying moments of the final day’s play. Washington Sundar and Shardul Thakur had played their part with the bat in the first innings whereas Shubman Gill, another series debutant, top-scored for India with a fine 91 in the chase.