Rohit Sharma not being a part of the limited-overs' squads to Australia is a huge loss to India even before the start of the series. 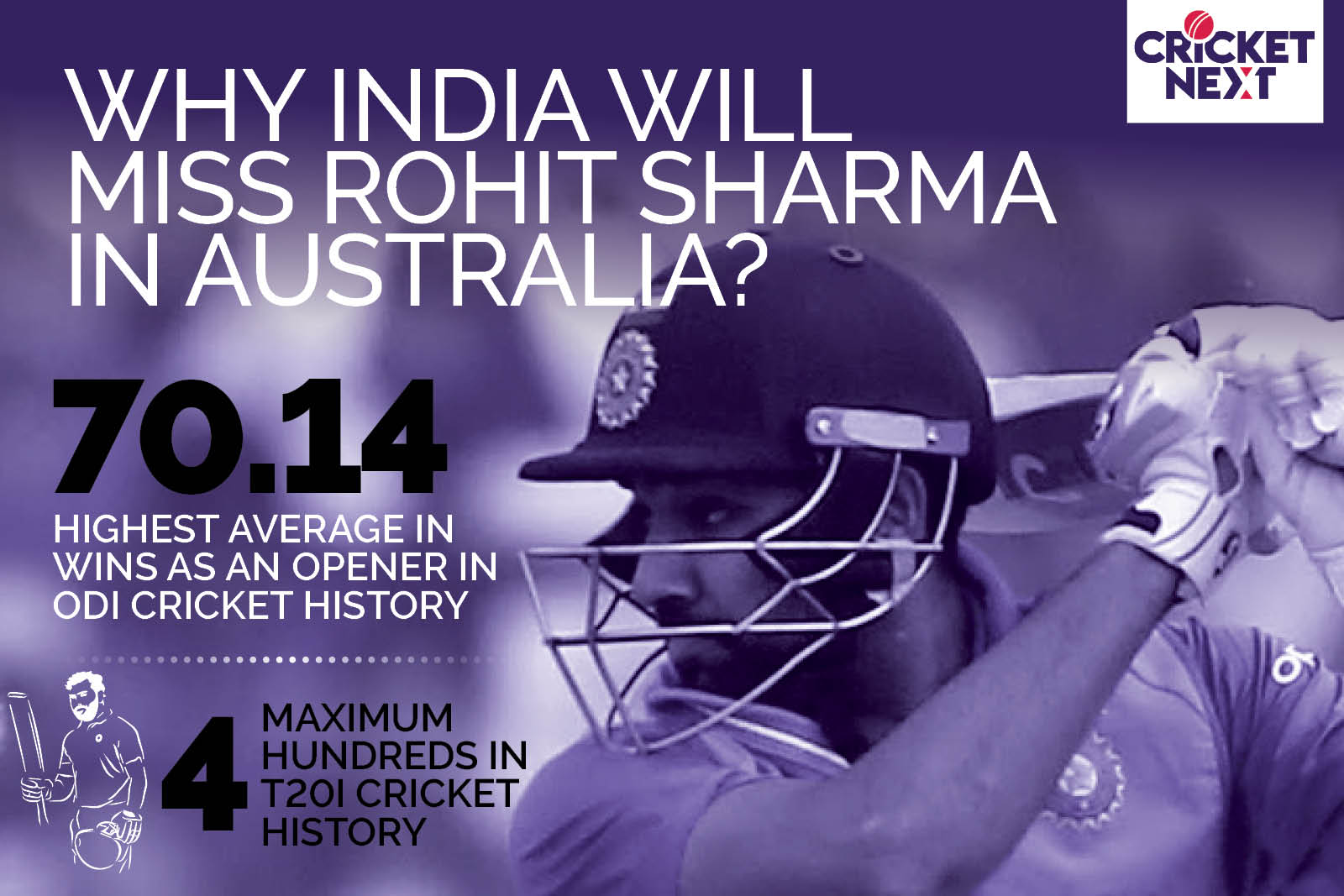 He is amongst the greatest ODI openers of all time. He was in sensational form in the 2019 World Cup in England and has a great record against and in Australia. He is also a genuine match-winner for India in T20I cricket. Thus, Rohit Sharma not being a part of the limited-overs' squads for the Australia tour is a huge loss to India even before the start of the series.

We highlight some of the reasons on why India sans Rohit will be a major blow for the visitors.

Rohit Sharma is a giant in ODI cricket - his record places him amongst the greatest batsmen in the history of the format! Even more spectacular is his record as an opener. Rohit has aggregated 7148 runs in 138 innings at an average of 58.11 and strike rate of 92.26 opening the innings for India. His average is the highest for an opener (min. 50 innings) in ODI cricket. He is followed by Jonny Bairstow (50.19), Hashim Amla (49.89) and Sachin Tendulkar (48.29).

More significantly, Rohit has the highest batting average (min. 25 innings) in victorious matches in ODI cricket history. This basically means that he is the greatest match-winner amongst openers in ODI cricket - a stunning feat when you compare the names he has left behind - the likes of Tendulkar, Gilchrist, Hayden, Greenidge, Haynes, Amla amongst others. Just for perspective, Rohit (70.14) is followed by Amla (65.52), Dilshan (63.16), Chanderpaul (61.03), Tendulkar (60.73), Guptill (58.75) and Lara (58.42).

It translates to saying that Rohit - the opener is a bigger match-winner for India than Tendulkar the opener for India (and he was spectacular!), Amla for South Africa, Lara for West Indies! 21 of Rohit's 27 hundreds (ie. 77.78%) have resulted in a win for India. The corresponding percentages for Tendulkar was 66.67%, Warner - 72.22% and Dhawan - 76.47%.

A SPECTACULAR WORLD CUP AND A SENSATIONAL 2019

Rohit Sharma was unstoppable in the 2019 World Cup in England. He aggregated 648 runs in just 9 innings at an average of 81 and strike rate of 98.33 in the flagship tournament. Only Sachin Tendulkar (2003) and Matthew Hayden (2007) aggregated more in any single edition of the World Cup. His 5 hundreds were the maximum for any player in any World Cup.

Also Read: Pat Cummins Yet To Decide On Availability for White-ball Series In particular, his record in Australia in ODI cricket is also outstanding and the best for any Indian batsman. Rohit has aggregated 1328 runs in 30 innings at a strike rate of 90.58 Down Under. His average of 53.12 is the highest for an Indian batsman (min. 500 runs) in Australia - higher than Kohli (50.17), Gambhir (49.86), Dhoni (47.86), Dhawan (38.83) and Tendulkar (34.67). He has already recorded 5 hundreds in Australia. His most famous hundred came against Bangladesh (137 off 126 deliveries) in the Quarter-Final of the 2015 World Cup at the MCG. Rohit has a knack of producing the big hundreds - he is the only batsman in ODI history to record three double hundreds - not surprising then that he scored an unbeaten 171 in Perth in 2016.

A MATCH-WINNER FOR INDIA IN T20I CRICKET

Rohit will be missed in the T20I XI too. He has been a genuine match-winner for India in the format - no batsman in the history of the format has aggregated more runs in victorious matches in T20I cricket than Rohit (2152). He has recorded 4 hundreds in the format - again the highest in the format. 21 of his 25 50-plus scores (84%) have resulted in an Indian win. The corresponding percentage for Kohli is 75% (18 of 24 50-plus scores). Rohit has been sensational for India in limited overs cricket in the last few years. Scoring big runs at a high strike rate, he has single-handedly won India many a match in both ODIs and T20I cricket. Needless to say there are few better sights in world cricket than to see him in full glory with the bat.

India will miss his services big time in Australia.