India registered a comfortable seven wicket win over Australia in the third and decisive ODI at Bengaluru. Here are some of the numbers from the encounter.

Indian vice-captain Rohit Sharma became the third fastest batsman to reach 9000 ODI runs during the series decider between India and Australia at Bengaluru.

Rohit needed four runs to get to the landmark and the senior India opener got to it in the final ball of the first over of India's innings to sit behind skipper Virat Kohli and South Africa's AB de Villiers. 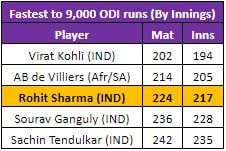 On the other hand, Virat Kohli also became the fastest captain to 5000 ODI runs, beating the likes of Dhoni and Ponting to the record.

Kohli and Rohit also set the record for the biggest partnership for the second wicket ever at the Chinnaswamy Stadium during the chase, with 135*.