India vs Australia: In Numbers - Why Hosts Must Be Wary of Jasprit Bumrah's White-ball Efficiency

Jasprit Bumrah will be the biggest threat in the Indian bowling attack when the ODI series against Australia begins on the 27th of November. Here's why. Jasprit Bumrah was one of the best bowlers of the recently concluded Indian Premier League (IPL) 2020. He was brilliant with the new ball and at the death, picked a heap of wickets mostly of quality top and middle order opposition batsmen and was phenomenally restrictive - a standout Bumrah quality which separated him from the likes of Trent Boult and Kagiso Rabada. These quintessential Bumrah qualities stand out in ODI cricket too and will make him the biggest threat in the Indian bowling attack when the ODI series against Australia begins on the 27th of November.

We look at some of these attributes in detail and what Bumrah has achieved in his relatively short ODI career so far. Bumrah has picked 104 wickets in 64 ODIs at an average of 24.43 and strike rate of 32.1. Even more impressive than his wicket-taking prowess is his ability to restrict the opposition batsmen - he has a stunning economy rate of just 4.55! Bumrah was the second-fastest Indian to 100 wickets - he reached the feat in his 57th ODI, taking one match more than Mohammed Shami (another success story for India in ODIs). Bumrah is also amongst the 10 fastest to 100 ODI wickets of all-time!

MORE THAN 50% OF WICKETS OF TOP 6 AND EARLY DISMISSALS

53 of Bumrah's 104 wickets are of the opposition top 6 - an indicator that he often gets the crucial wickets and the big names from the opposition. Not only does he take quality wickets but also dismisses the batsmen early in their innings. As many as 52 (50%) of his dismissals have registered scores of under-10 - that is a phenomenal statistic and an indicator of how potent Bumrah is with the new ball. Another 31 dismissals are of batsmen in the range 10-29. This, in effect means that 83 of Bumrah's 104 wickets have been of batsmen with scores under-30. This is a staggering record! THE BEST FAST BOWLER IN THE WORLD SINCE DEBUT

Bumrah has the second-highest number of wickets amongst pacers in the world in ODI cricket since his debut on the 23rd of January, 2016 against Australia in Sydney. His bowling average of 24.43 is the second-highest (after Ngidi) amongst pacers (min. 50 wickets) in this time-frame. His economy rate of 4.55 is the best in this period too amongst pacers from major cricket playing nations. Thus, Bumrah is a deadly combination of a destructive wicket-taker who is also very restrictive - this is a rare double in contemporary ODI cricket!

A combination of wickets taken, economy, average and strike rate makes Bumrah the best fast bowler in ODI cricket since his debut.

But the aspect of his bowling which stands out even more is his economy rate. The average norm for pace bowlers during Bumrah's career is 5.45. This means that he is conceding 0.90 runs per over less than the standard of his teams - that is a significant difference. 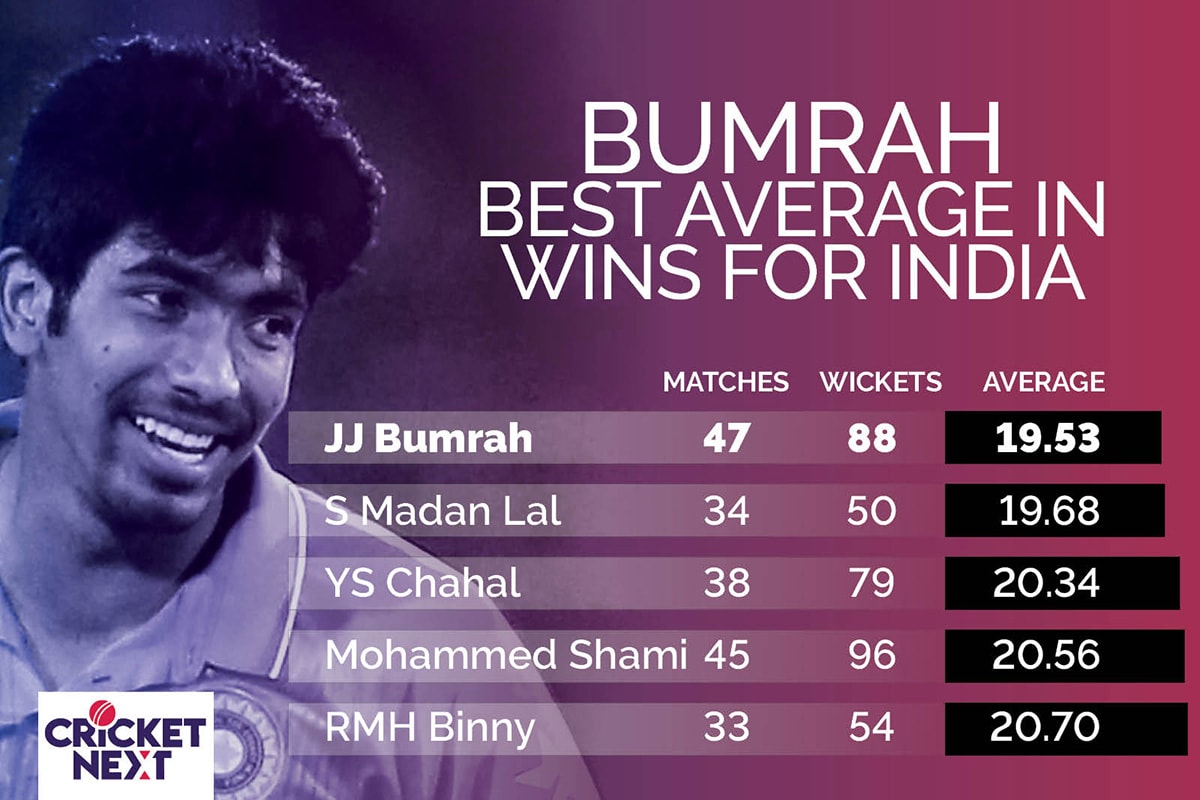 Bumrah has been a genuine match-winner for India with the ball in ODI cricket. His average of 19.53 in victorious matches for India is the lowest in the country's history. He was India's highest and overall the fifth-highest wicket-taker in the 2019 World Cup in England where he ended with 18 wickets in 9 matches at a stunning economy rate of just 4.41 - the best in the tournament (min. 10 wickets). He played a supporting role and was phenomenally restrictive conceding just 3.97 runs per over in the historic ODI series triumph in South Africa in 2018 - India's first and only series win in the country.

Bumrah did not have a great start to 2020 - post his back injury he managed to pick just one solitary wicket in 6 ODIs in the calendar year. But looking at his form in the IPL he will surely make amends for India come the 27th of November.