India vs Australia, Boxing Day Test at Melbourne, Day 1, Highlights: As It Happened

What a day for Siraj!

Mohammad Siraj ends his first day as a Test cricketer by giving a big hug to @coach_rsridhar, another man who’s played a big role in his development in the last few years #AUSvIND

India didn't carry baggage of 36 all out, says VVS Laxman.

Excellent days play for India. Bowlers were once again sensational, both the debutants looked confident, Rahane captained the side really well but most importantly they didn’t carry the baggage of the loss from Adelaide. #INDvAUS

India vs Australia live score, IND 36-1: STUMPS: Shubman Gill and Cheteshwar Pujara play out an over from Josh Hazlewood, ensuring India end with the advantage. They lost Mayank Agarwal early but these two have been solid, Gill in particular. He was dropped early by Labuschagne but has settled down nicely. That they're in this position is thanks to Ashwin, Bumrah and Siraj. Terrific work with the ball by the bowlers to bowl out Australia for 195.

India vs Australia live score, IND 35-1: Australia turn to Nathan Lyon, who goes for 6 in that over. Shubman Gill with some tremendous footwork there.

India vs Australia live score, IND 29-1: Hazlewood starts with a maiden to Pujara. Meanwhile, check this out on a comparison between Agarwal and Pujara.

Mayank Agarwal v Cheteshwar Pujara, a comparison.@RickyPonting looks at the difference in their back lift and how it changes their style #AUSvIND pic.twitter.com/oB6WSrz5ng

India vs Australia live score, IND 28-1: Five runs from an over off Cummins. India are a lot more positive with their batting in this innings, Gill in particular. Bowling change - Josh Hazlewood comes on.

India vs Australia live score, IND 23-1: Shubman Gill with a couple of boundaries off Starc in that over. Both through the on side. This is good batting from Gill, who was fortunate to have been dropped earlier.

A bit of an injury concern for Matthew Wade

Matthew Wade is off the ground for treatment after this incident. Hopefully it's nothing too serious and he's back on soon... #AUSvIND pic.twitter.com/oC5uvvHBnN

India vs Australia live score, IND 11-1: New man Cheteshwar Pujara has come in and looked to calm things down so far. Gill, who is on debut, has looked good in his brief stay thus far.

India vs Australia live score, IND 0-1: OUT! Australia have the early breakthrough they so craved. Starc traps Agarwal plumb and even though the opener reviews, it is unsuccessful and he has to walk.

India vs Australia live score, AUS 195 all out: OUT! Cummins goes for a big shot off Jadeja but he finds Siraj in the deep at long-on. That's the end of the innings now and India will be reasonably pleased.

India vs Australia live score, AUS 191-9: OUT! Nathan Lyon is trapped plumb in front of the stumps by Bumrah and he has to go despite a review. What's even sweeter about this is that Lyon had smacked Bumrah for six and four prior to that.

Has the Test actually been this boring?

when you're feeling the effects of a big Christmas Day #AUSvIND pic.twitter.com/1vXWHdbMJe

India vs Australia live score, AUS 164-8: OUT! Starc goes for a big shot but he only manages to find Siraj in the deep. Australia are in tatters here. India are, for once, going through the tail.

India vs Australia live score, AUS 164-7: Mitchell Starc and Pat Cummins are at the crease now and the former smacks Bumrah for a boundary. Can India get through the tail?

India vs Australia live score, AUS 155-7: OUT! Ashwin strikes again and the skipper has to depart. He tosses one up that Paine inside edges one to Vihari and backward short leg. The plan worked to perfection.

India vs Australia live score, AUS 155-6: OUT! Siraj bowls an absolute peach of a ball that moves just slightly inside and raps Green on the inside pad. He reviews almost immediately but three reds later, he's got to walk.

India vs Australia live score, AUS 152-5: Paine almost being run out aside, both batsmen have looked relatively steady during the final session thus far. India haven't bowled too badly but the batsmen have done well to survive the good balls.

India vs Australia live score, AUS 142-5: NOT OUT! IGreen sells his skipper down the river and Paine looked run out at first glance but replays suggest he had a bit of bat behind the crease when the bails were broken. Oh it's close, very close indeed. Indian fans weren't happy with that one.

India vs Australia live score, AUS 136-5: Hello and welcome back to the final session of Day 1 in the Boxing Day Test at Melbourne. It's safe to say the hosts need a big partnership from Paine and Green, as well as some key runs from the tail.

India vs Australia live score, AUS 136-5: And that is tea on Day 1. India had won the first session having taken 3 wickets and they took 2 more wickets in the second session. All for Australia to do in the final session. Join us in a bit to see how that goes.

India vs Australia live score, AUS 136-5: Tim Paine is the new man in and he survives an LBW shout from Siraj that India even reviewed. The ball just clipped the stumps but he was given not out so umpire's call saved the Aussie skipper. Siraj in his next over raps Green on the pads but despite a loud appeal, not out it is and no review is taken.

India vs Australia live score, AUS 134-5: OUT! Siraj gets his first Test wicket and it is the dangerous Marnus Labuschagne. He goes for a flick down the leg side but finds Shubman Gill who takes a good diving catch.

India vs Australia live score, AUS 127-4: Cameroon Green is the new man in for Australia; they will hope him and Labuschagne can put together a decent partnership and see through the session. India, meanwhile, will want more breakthroughs.

India vs Australia live score, AUS 124-4: OUT! Bumrah gets the breakthrough and Head has to depart. He goes for an expansive drive but only edges one to Rahane at gully.

India vs Australia livs score, AUS 117-3: India are desperate for a wicket as Rahane brings back Bumrah into the attack. His comeback over is a forgettable one though as it ends with Head scoring successive boundaries off him.

India vs Australia livs score, AUS 104-3: Head is done waiting. First goes for an ambitious drive off Umesh that takes the outside edge and runs away for four. Next over he takes on Siraj, playing a lovely shot straight past the bowler that runs away to the ropes. 100 up for the hosts.

India vs Australia livs score, AUS 90-3: OUCH! Siraj bowls an inch perfect bouncer that clips Labuschagne on the helmet - and even leads to a brief appeal after Gill had taken the catch. Nothing doing, although the physio is out to check on the batsman now.

India vs Australia livs score, AUS 74-3: Debutant Mohammed Siraj starts things off in the second session and he bowls in tandem with R Ashwin, who was at his best during the first session. Head and Labuschagne have remained firm thus far though.

India vs Australia livs score, AUS 65-3: Hello and welcome back to the second session of Day 1 of the second Test. Australia will be looking to build a partnership while India will want more wickets. 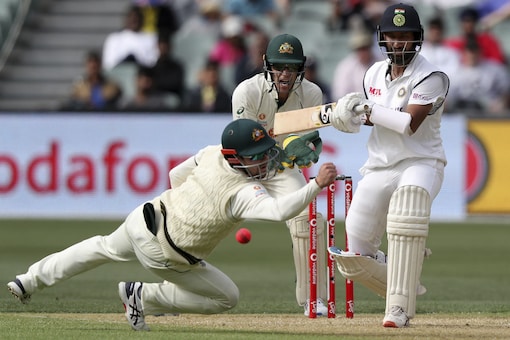 India vs Australia 2nd Test in Melbourne Live Scores Latest updates – India vs Australia live score, IND 36-1: STUMPS: Shubman Gill and Cheteshwar Pujara play out an over from Josh Hazlewood, ensuring India end with the advantage. They lost Mayank Agarwal early but these two have been solid, Gill in particular. He was dropped early by Labuschagne but has settled down nicely. That they’re in this position is thanks to Ashwin, Bumrah and Siraj. Terrific work with the ball by the bowlers to bowl out Australia for 195.

TOSS: Australia have won the toss and opted to bat here. Not a great start for India already here.

Preview: 36 all out! It will take a long time to erase the memory of the second innings from the Adelaide Oval where India’s batting sunk to an all-time low. Instead of trying to forget the nightmare India need to feel the pain and play with that hurt to come up with an inspiring performance in the second Test – the all important Boxing Day Test at the iconic MCG!

It is, of course, easier said than done. India will be without their captain and premier batsman – Virat Kohli. Kohli has a great record in Australia – the best for any Indian batsman in their history and is almost equal to half the side’s batting in tough overseas conditions. Then the injury to Mohammed Shami – their premier strike bowler means that India’s fast bowling resources are further depleted (they were already without an in-form Ishant Sharma).

While KL Rahul and Mohammed Siraj are expected to come in for Kohli and Shami, three more changes are possible in the XI. Shubman Gill is expected to replace an out of form Prithvi Shaw, Rishabh Pant is likely to come in for Wriddhiman Saha and Ravindra Jadeja might be selected as the all-rounder instead of Hanuma Vihari. The last exchange is the least likely though as India has always gone in with a 6 + 1 + 4 formation overseas but India has a different man at the helm for the remainder of the series. Also, looking at Jadeja’s form across formats he may be better than Vihari at number 6 and will also add to the bowling options apart from being a livewire on the field.

Ajinkya Rahane, the stand in captain – needs to lead from the front and deliver in the absence of Kohli. Rahane last got a hundred in SENA at the MCG in 2014 and since then apart from 81 at Nottingham and 70 in Adelaide in 2018, there has been nothing really to write home about.The bowling will be heavily dependent on Jasprit Bumrah. His 6-33 was instrumental in routing Australia for 151 in the first innings at the MCG in 2018 but he will need support from Umesh Yadav and R Ashwin.

Australia are likely to go with an unchanged XI into the Boxing Day Test. David Warner is still not fit which means the Matthew Wade-Joe Burns combination gets another chance at the top of the order. Number 3 and 4 – Marnus Labuschagne and Steven Smith will be the two key batsmen for Australia. The latter missed out in the first innings in Adelaide and it is not too often that Smith fails in two consecutive Tests – beware India!

The three fast bowlers – Pat Cummins, Mitchell Starc and Josh Hazlewood – ecstatic after their performance in Adelaide – will again be the trump cards for Australia in Melbourne. In particular, Cummins – regarded as the best Test bowler in the world – has a great record at the historic venue. He has picked 18 wickets in just 3 Tests at 16.16 a piece with two five-wickets in an innings. India may make as many as 5 changes to the XI that played in Adelaide. Gill for Shaw, Rahul for Kohli and Siraj for Shami are almost certain.