Back to News18
Home » Cricket Home » News » India vs Australia, 3rd ODI Match in Bangalore Highlights: As it Happened

India vs Australia, 3rd ODI Match in Bangalore Highlights: As it Happened

India vs Australia live cricket score and latest update of 3rd ODI at News18.com. Stay with CricketNext for live score and ball by ball commentary of Ind vs AUS cricket match being played in Bangalore.

INDIA WIN: A straight drive by Manish Pandey and India win the series. They take the series 2-1 after this comfortable win.

Starc steams in and pitches the ball on good length. Iyer picks the ball early and hits it over point for a four. Iyer has shown his class here. India are withing touching distance of a victory. The score is 280/3.

OUT: And out of nowhere Kohli is bowled for 89. Hazlewood produces a brilliant yorker and removes his middle stump. Still India are on top. It's 274/3.

Kohli has become a little cautious as he is nearing his ton. This could be the opening that Australia had been looking for. And then Iyer just slaps the ball for a big six. Starc looks amazed. And then he goes inside out for a four. India are 268/2 after 45 overs.

FOUR: Iyer makes room for himself and pierces one from Hazlewood through the off side. India are inching closer to a comfortable win. He cuts another one for four. India are 242/2 in 42 overs.

India are still in driver's seat. Australia need a wicket here, and that too Kohli's. He is nearing a ton, so one would not expect big shots from him. India are 228/2.

FOUR: Kohli now has his eyes set on a ton. He slaps the ball through the leg side for a four off Agar. Excellent batting by the skipper. And he also completes 7000 runs in ODIs while chasing. India are 219/2.

OUT: After a magnificent 119, Rohit perishes. But not before putting in the driver's seat. Gets a leading edge off Zampa and Starc takes a simple catch. India are 206/2.

FIFTY FOR KOHLI: And yet another fifty for skipper Kohli. A short ball from Cummins and he pulls it for a four. And the next ball he drives it straight past the bowler. He is on song here. The score moves to 202/1.

FOUR: Now Kohli is picking up the scoring rate as he creams Cummins through the off side for a four. India are in the driver's seat at the moment. The score moves to 188/1 in 34 overs.

Fourteen runs come off the 32nd over bowled by Josh Hazlewood, and Kohli and Rohit are only dealing in sixes at this point. Rohit Sharma picks up a length delivery and swings his bat right through the line, and the score now reads 175/1. Australia need a wicket right about now, or this match will go away from their grasp very soon.

And with a single off the bowling of Hazlewood, Rohit Sharma reaches the 29th ODI century of his career, and could go on to get an even bigger score if he bats for the entirety of the innings. At the end of 30 overs, the score reads 156/1.

ANOTHER ONE! Rohit Sharma has launched into Aaron Finch this time, and hit him for a huge six. At the end of 28 overs, India are 147/1. The men in blue are solidifying their chances of winning this match with every passing over.

SIX! Another six from Rohit Sharma, this time Adam Zampa's half-tracker is dismissed to the stands over the square-leg boundary. India are in complete control here, and at the end of 26 overs, India are 135/1.

And as we enter another over of Zampa vs Kohli...

SIX! Rohit 'Hitman' Sharma is going off once again! It's the kind of shot which can lift all the pressure off a batsman, as Australia had begun to tighten the screws for the last few overs. Labsuchagne's first over has not gone well and at the end of 21 overs, India are 107/1.

It's Zampa vs Kohli once again, as the Indian captain survives the over from him. Zampa is however getting bounce and whip to his deliveries, and Kohli will need to make sure he survives this initial spell. At the end of 17 overs, India are 88/0.

OUT! KL Rahul is dismissed by Ashton Agar for 19 runs. This, after the umpire turned down the appeal for LBW, but replays showed that the ball was going on to hit middle and leg stump. A huge, huge wicket for Australia as they get their first breakthrough. India is 69/1 after 13 overs.

It's 52/0 after eight overs with Rohit Sharma batting on 36 and KL Rahul batting on 10. The men in blue have already brought up the 50 score, and just need to keep playing the way they have in front of a Bengaluru crowd that has thoroughly been entertained till now.

India are going along at a good pace here. It's 39/0 after six overs, and Rohit Sharma looks like he's in the mood to go on and score big here. Australia have come close with a couple of appeals, but were grasping at straws really. 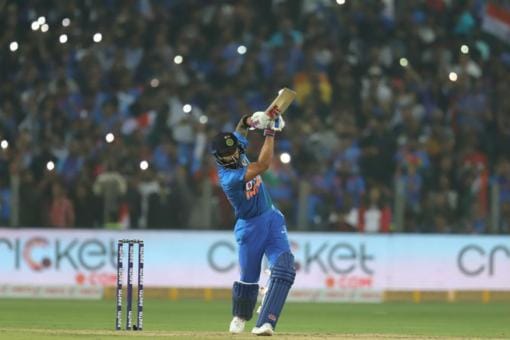 India vs Australia, latest update: And with a single off the bowling of Hazlewood, Rohit Sharma reaches the 29th ODI century of his career, and could go on to get an even bigger score if he bats for the entirety of the innings. At the end of 30 overs, the score reads 156/1.

These are the key questions from India's perspective as get set for the series-deciding third ODI in Bangalore against Australia on Sunday. Pant missed the second ODI in Rajkot with concussion he suffered during the first ODI. Dhawan didn't field in Rajkot after being hit on the ribs while batting. Rohit dived over his left shoulder during Australia's chase and went off in pain.

While there's no official update yet, there are reports that the injuries to Dhawan and Rohit are not severe, which means they should play on Sunday. India will need that badly, as they wouldn't want to lose any of the momentum they gained in Rajkot.

India were hammered in Mumbai where Australia chased 256 without breaking a sweat, winning by 10 wickets courtesy attacking centuries from David Warner and Aaron Finch. India's batting had floundered in that game, with Virat Kohli unhappy with some of their batsmen 'respecting' Australia's bowlers a bit too much.

India showed they could correct their mistakes quickly, bouncing back in style in Rajkot. They showed intent through the innings, with Rohit giving a quick start before Dhawan and Kohli carried on. India had a slight slip in the middle overs but they found a new middle-order hero in KL Rahul, who smashed a 52-ball 80 from No. 5, a position he was batting in only for the second time in his ODI career.

Rahul's adaptability now gives India plenty of options, especially given how well he has kept wickets in the two matches. It also allows Kohli to stick to No. 3; the India captain evidently enjoyed returning to his position, scoring 78 off 76.

India's bowling did the job too, coming on top even when they were put under pressure multiple times during Australia's chase. Ravindra Jadeja bowled a lot slower through the air, getting the key wickets of Finch and Marnus Labuschagne. Kuldeep Yadav was costly initially but he came back for his final spell and got Alex Carey and Steve Smith, who was two away from a ton. Jasprit Bumrah was brilliant throughout although he managed only one wicket, that of Adam Zampa's. Navdeep Saini and Mohammed Shami got five wickets among them and bowled yorkers at will.

India will need all that and more on Sunday, as they are up against another belter of a track in Bangalore. Australia's batsmen have all had decent hits - Warner and Finch in Mumbai, Smith and Labuschagne in Rajkot. In Glenn Maxwell's absence, they do miss some firepower in the lower order but the top order's form should make them happy.

Australia might think about bringing in Josh Hazlewood for Kane Richardson, who went for 73 in 10 overs for two wickets. Mitchell Starc was even more expensive, giving 78 from his quota without bagging a wicket. But unless Australia want to rest him, it's unlikely he'll be dropped.

The two sides traveled from Rajkot to Bangalore on Saturday, which meant there was no time for practise. But conditions in Bangalore are well-known to be a batting paradise, which sets the stage well for Sunday's decider.