Here is Cricketnext's report card of India's performance in Melbourne.

Contributions from Yuzvendra Chahal, MS Dhoni and Kedar Jadhav helped India end their Australian sojourn on a high as they defeated the home side in the final ODI to clinch the three-match One-Day International series 2-1.

Here is Cricketnext’s report card of India’s performance in Melbourne. Rohit started this series with a solid 133 and ended it with a lackluster 9 in Sydney. Apart from taking a brilliant catch at slip, India opener hardly made any contribution in the decider. He fell to Peter Siddle’s inswinger while playing a flick shot on a track that offering help to the bowlers. Indian vice-captain, however, looked in fine touch in the previous two encounters and will look to carry forward the form in the forthcoming five-match ODI series against New Zealand. Like in the previous ODI, left-hander once again got off to a decent start but again failed to convert it into a big score. Dhawan didn’t look at his best and only managed 23 runs in 46 deliveries. Surprisingly, he didn’t score a single boundary during his stay in the middle. The 33-year-old came into this series without any match practice and that reflected in his game. Dhawan will play quite a few limited-overs games (including IPL) ahead of the World Cup and that will help him to get back into the groove. You don’t often see Kohli throwing away his wicket after getting off to a solid start during a run chase, but that’s exactly what happened in Melbourne. Indian skipper arrived at the crease after the departure of Rohit and looked busy from the word go. He was dropped at first slip when he was on 10 before surviving a couple of close run-out opportunities with MS Dhoni, with whom he added 54 runs for the third wicket. Kohli fell to Jhye Richardson for the third time in the series when he was on 46 and left India in a spot of bother. Overall, he did get that mandatory century in Adelaide and would have liked to do something similar at the Melbourne Cricket Ground. Kohli was superb as a captain in this series and made some good calls, including the inclusion of Chahal in the final match. The Indian team management will be delighted with the way Dhoni performed in this series. Wicketkeeper-batsman made a debatable 96-ball 51 in the first ODI, which actually kept India in the game, but was criticised for eating up deliveries. Dhoni then followed it up with a yet another fifty in the second match, but it was in Melbourne where he stood head and shoulders above the rest. The 37-year-old came out to bat at No. 4 and crafted a match-winning 114-ball 87*. He allowed Kedar Jadhav to be the aggressor in the unbeaten 121-run stand and took the game till the very end, before getting the job done like he has done so many times in the past. With 193 runs at an unbelievable average of 193, Dhoni emerged as India’s highest run-scorer and played his part in all the three games.

Despite pulling off a pretty good stumping, Dhoni surprisingly was slightly sloppy behind the stumps. 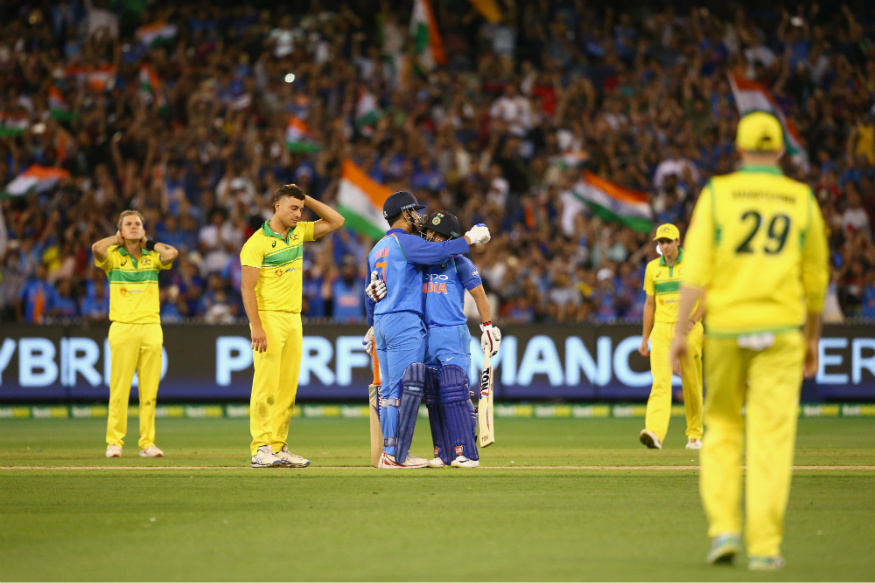 Jadhav is a captain’s delight. He is a solid batsman. He is a street-smart bowler. And he is a safe fielder as well. Playing his first match of the series, the 33-year-old scored an unbeaten 61 in 57 balls, including seven fours. Jadhav looked calm and composed during his stay in the middle and showed no signs of recklessness. Except for one over where he conceded 15 runs, Jadhav was fairly economical. India automatically looks balanced when Jadhav is in the playing XI and the team management will want him to stay fit with World Cup just over four months away.

India didn’t require the services of Karthik, who played a match-winning cameo in the previous ODI, in this match. The 33-year-old has taken up the role of a finisher with both hands and the Virat Kohli-led side will hope that Karthik can keep going in the coming months. Came in as a replacement for Hardik Pandya, Shankar made his ODI debut and delivered an economical six overs where he conceded only 23 runs. All-rounder from Tamil Nadu has been a consistent performer in the domestic circuit and has all the ingredients to serve as a backup for Pandya. India went with Jadhav, Vijay and Ravindra Jadeja in Melbourne and that didn’t just give them options in the bowling department, but it also strengthened their batting. Left-arm spinner went for 53 runs in his nine overs but did create a couple of opportunities. He didn’t get much chance to bat but Jadeja did a decent job in the bowling department in the series. There is no doubt that Chahal and Kuldeep Yadav are much better spinners but it’s Jadeja’s batting and fielding that gives him an edge. It won’t come as a surprise if India stick with him in the comings months as he can turn out handy in the World Cup. Things didn’t quite go well for Bhuvneshwar in the first ODI but once he found his rhythm, the right-arm pacer bowled beautifully in the last two games. With figures of 2/66, 4/45 and 2/28, Bhuvneshwar ended the series as the leading wicket-taker. He dismissed Australian skipper Aaron Finch in all the three matches and provided India early breakthroughs. Apart from Finch, Bhuvneshwar also accounted for Alex Carey in the final encounter. Once Jasprit Bumrah comes back, and if Bhuvneshwar manages to continue this form, India won’t have to worry much about their bowling department. Shami has done more than enough in this series to cement his place in the Indian team as the third-preferred pacer. The 28-year-old scalped five wickets in the series, including two at the MCG. Shami bowled with good pace and dismissed dangerous Glenn Maxwell and Billy Stanlake. He was quite economical in his first five overs and gave perfect support to Bhuvneshwar. Saying Shami has sealed his place in the World Cup squad won’t be an understatement, unless something drastically goes wrong. Chahal finally got to play an ODI after October 2018 and straightaway made a colossal impact by picking up 6 for 42 to help India bundle out Australia for 230. India have mostly gone with Kuldeep over Chahal in recent times, but the moment he was asked to do the job in the decider, the legspinner delivered. He dismissed the experienced duo of Usman Khawaja and Shaun Marsh in his very first over before dismissing Peter Handscomb, Marcus Stoinis, Jhye Richardson and Adam Zampa to register the joint-sixth best bowling figures for India. India can still play Chahal and Kuldeep in the same match, but for that, they will have to compromise on their batting.

* Ambati Rayudu featured in the first two ODIs but couldn’t contribute much. Even if Dhoni bats at No. 5, India have Jadhav and Karthik who can take that No. 4 spot. Rayudu will have to come up with something special to be selected over the above-mentioned names.

* Kuldeep bowled well in Sydney but struggled in the second ODI. Kohli said Kuldeep was rested for the final match and they didn’t want to be too predictable. The left-arm wrist-spinner will surely be part of India’s limited-overs squad, but he will have to fight it out to get into the playing XI.

* Khaleel Ahmed and Mohammed Siraj played a game each but were fairly expensive.