With the World Cup less than five months away, and with Warner and Smith still serving bans for their involvement in the ball-tampering saga and Starc, Cummins and Hazlewood rested after an arduous Test series, the squad announced by Australia for the three-match ODI series against India does not exude much confidence.

Australia had the worst-year in their ODI cricket history in 2018 losing 11 of the 13 ODIs they played in the year. Their win-loss ratio in the year (0.181) was the worst for any country in the calendar year – even lower than Nepal, PNG and Hong Kong!

With the World Cup less than five months away, and with Warner and Smith still serving bans for their involvement in the ball-tampering saga and Starc, Cummins and Hazlewood rested after an arduous Test series, the squad announced by Australia for the three-match ODI series against India does not exude much confidence.

A collective experience of 424 ODIs (out of which Finch has played 96), which in turn means that, on an average, every player has played just 30 matches, a combined batting average of 36.10 (only batsmen and all-rounders) and bowling average of 38.40 (only bowlers and all-rounders) – even at first glance these numbers are poor for any international team leave alone the defending World Cup Champions.

But how poor is this Australian team? What are its weaknesses and strengths, if any? 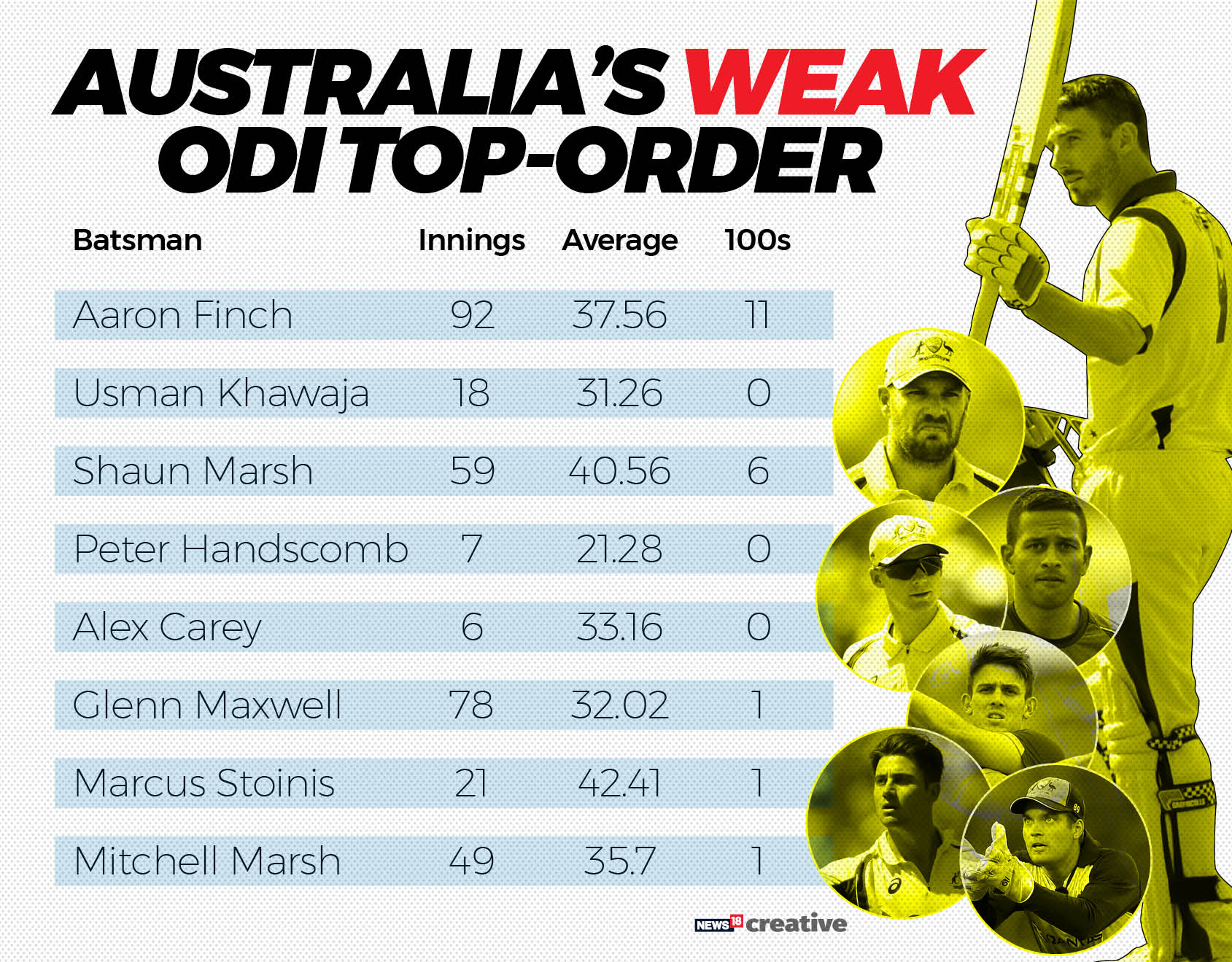 The Australian top-order does not score enough runs – that is their biggest concern. Neither do they have enough experience in the format. None of the batsmen (including the all-rounders) have played 100 ODIs and the average experience of the batting line-up is 44 matches.

Three of the four specialist batsmen in the squad average below 40 – Finch, Khawaja and Handscomb. Khawaja has played a total of 18 ODIs in his career, the last of which was in January, 2017. He aggregates just 469 at an average of 31.26 – well below the standard norm for an opener where he is expected to bat for Australia. He has registered just one fifty in his last 8 ODI innings. Handscomb has just managed to score 149 runs in his 7 outings at a paltry average of 21.28. He also played his last ODI in October, 2017.

The wicketkeeper batsman, Carey has played just 6 ODIs and has a strike rate of 78.65 – below-par for a lower-order batsman in contemporary ODI cricket. His List-A strike rate is also quite ordinary – 76.84. 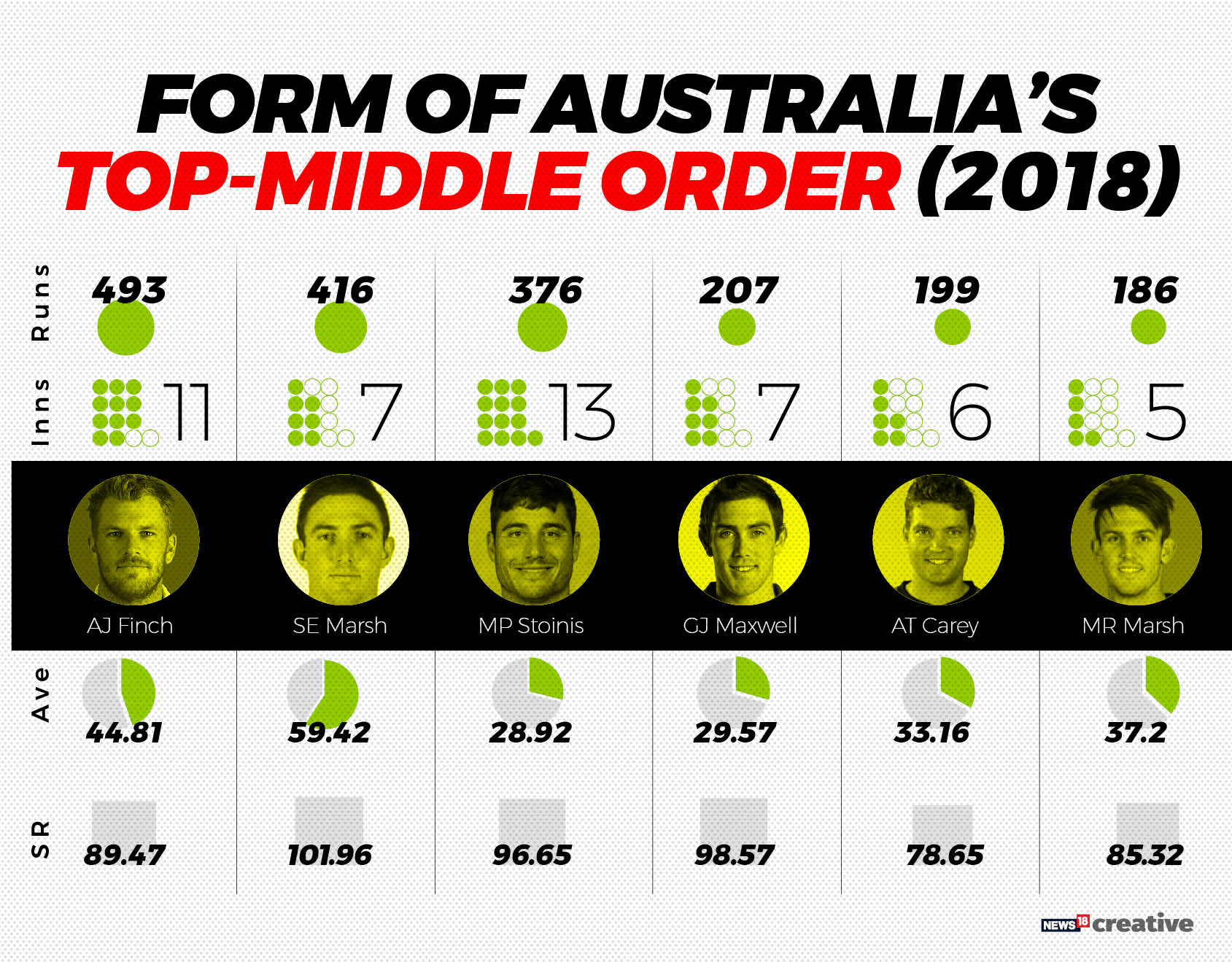 The Australian batting will be overly dependent on Finch and Marsh, who would be under severe pressure to perform, especially after their failures in Test cricket (average of 27.80 and 25.89 in 2018) – this could have an adverse effect on their ODI performances too.

What is worrying for the Australians is the fact that barring Khawaja and Shaun Marsh, none of the other Australian batsmen average (per innings) in the 40s in LIST-A domestic cricket. In fact, most of them hover around 30 runs per innings as far as Actual Average (runs per innings) is concerned.

Mitchell Marsh has a batting average of 35.70 and bowling average of 35.54 in his ODI career. He can hit the long ball batting in the lower middle order (strike rate of 93.08) and is also restrictive with the ball (economy rate of 5.52). Although he played just 5 ODIs in 2018, he was in good form with the bat scoring 186 runs and was very economical with the ball conceding just 4.50 runs per over.

Maxwell has an average of 32.02 and strikes at 121.05 per hundred balls. He got some cameos in 2018 too but his performances with the ball were underwhelming – he bowled just 15 overs in 5 innings but did not pick a single wicket. He was also expensive going for 6.80 runs per over.

Stoinis was Australia’s leading wicket-taker last year with 13 wickets in 11 innings. Although he conceded 36.76 runs per wicket and was a touch expensive with an economy of 6.35, he made up for it with his batting – was Australia’s third-highest run-getter of the year with 376 runs at a strike rate of almost 97. Overall, Stoinis has a batting average of 42.41 in his 21-match career. With a brittle top-middle order and the omission of Head from the squad, Stoinis is Australia’s go-to man in the lower order.

With their three top pacers rested, the Australian bowling attack in the series looks non-threatening and timid.

They have a highly inexperienced bowling unit with Adam Zampa – 33 ODIs – the most capped ODI bowler in the squad (amongst specialist bowlers). The leg spinner has an average of 36.85 for his 42 wickets in the format. The only consolation is his economy rate of 5.69. His wicket-taking prowess has been poor in 2018 with just 2 wickets in 6 innings. They have included Nathan Lyon, a Test great, into the ODI squad. The off-spinner played just 2 ODIs in 2018 and has never been a regular in the ODI set-up – as his career numbers suggest – he has picked 18 wickets in 15 innings at a modest average of 36.77. However, his economy of 4.83 could help Australia contain the powerful Indian batting order in the middle overs.

Jason Behrendorff has a good LIST-A record (49 wickets in 37 innings at 28.57 apiece, economy rate of 4.84) but is yet to make his ODI debut which is a completely different ball game. Jhye Richardson hasn’t impressed in the 4 ODIs he has played picking just 7 wickets at 38.71 apiece and going for aplenty at 7.32 per over). And neither has Billy Stanlake set the stage on fire in his 6 ODI outings thus far (average of 39.28). He also has a middling LIST-A record with just 25 wickets in 20 innings at 38.36 apiece.

Peter Siddle will make a comeback into the ODI team after more than 8 years – he last played the format in November, 2010. Neither does he have an impressive ODI/LIST-A record. In 16 ODIs he has managed to pick just 15 wickets at 38.73 apiece. He has a good economy rate of 4.64 but will find it hard to contain the attacking Indian batsmen. His LIST-A numbers are also not threatening at all with just 57 wickets in 51 innings.

Australia has made some strange selections. There does not seem to be any rationale or methodology behind some of the names. Some surprise inclusions from the past (Siddle) suggest that there is not enough young talent in domestic cricket. There have also been some baffling omissions (Head and Short). The result – a rather weak and inexperienced squad.

They will have their task cut out against a formidable Indian unit.