India lost three wickets to run-outs in the first innings against Australia at the SCG and this could haunt them later in the Test. India has never won a Test in which they have lost three or more wickets in an innings to run-outs. 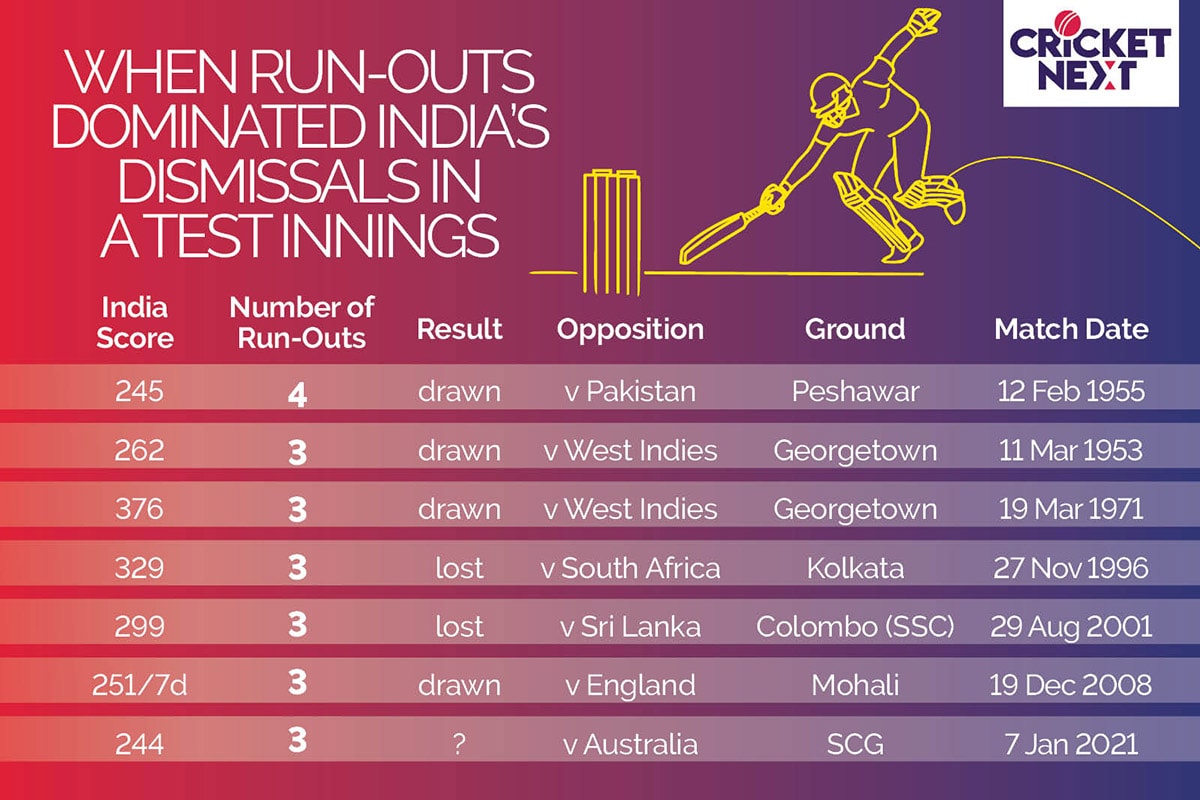 Run-outs are bad in limited-overs cricket but run-outs are almost 'criminal' in Test cricket when preserving your wicket is the key objective of the batsman. More often than not it is a reflection of poor judgement, a lack of urgency and sheer carelessness on the part of the batsman - just not attaching a big enough price tag on your wicket! India were the culprits today. They were guilty of as many as 3 run-outs in the innings which cost them dearly as they were folded for 244 giving Australia a vital 94-run lead which could be Game, Set, Match for the home team.

Just for perspective, Australia's lead bowler, Pat Cummins accounted for 4 wickets in the innings. But the second-highest wicket-taker for the hosts was Run-Outs. Hanuma Vihari and Cheteshwar Pujara had done all the hardwork, playing out overs and time and just when it was time to increase the tempo and score some runs, Vihari threw away his wicket away due to a terrible call which ended in him being run-out. Bogged down and not able to even rotate the strike, Vihari, in a quest for quick runs, pushed the ball to mid-off and set off for a hurried single which did not exist. Josh Hazlewood dived to his right and still managed a direct hit - that was the end of Vihari who was had barely covered three-fourths the distance and even did not make a great effort of dragging his bat in the crease. He was dismissed for 4 off 38 deliveries. All the hardwork, labour and toil was wasted - when you start so cautiously it becomes your duty to put up a substantial score - otherwise it puts enormous pressure on the batsman to follow. India lost a crucial wicket with the score at 142 courtesy a run-out due to bad judgement.

R Ashwin is not known to be the quickest in the field or between the wickets and batting with Ravindra Jadeja was always going to be a problem - the latter is one of the swiftest in the world and can speed between the wickets. Jadeja called for a quick-single but Ashwin was slow to react and Pat Cummins and Marnus Labuschagne did the rest. The Ashwin-Jadeja stand was the last recognized pair who could potentially put together a decent partnership for India. Thus, it was paramount that they do not take unnecessary risks and play out time, overs and also score some runs in order to get as close to the Australian score. To get run-out at that stage - well, the less said the better!

Jasprit Bumrah also fell victim not able to cope with Jadeja's pace between the wickets. The left-hander, eager to retain strike called for two but Bumrah wasn't quick enough and became the third Indian batsman to be run-out in the innings.

It does not seem that SCG 2021 will be an exception!

WHEN RUN-OUTS DOMINATED INDIA'S DISMISSALS IN A TEST INNINGS