Not too many people will now be talking about Rishabh Pant's dropped catches or his inadequacies behind the stumps in Test cricket for India. The Indian wicket-keeper batsman produced two outstanding world-class performances - one in the save of a lifetime at the SCG and the other in a win of a lifetime at The Gabba. The result - against all adversity with almost no one giving them a chance, with more than half their team injured, India beat Australia 2-1 by breaching the fortress in Brisbane and won the Border-Gavaskar Trophy for the second time in a row.

The maverick Pant ended the series as the highest run-scorer for India with 274 runs in 3 Tests (5 innings) at an average of 68.5 and strike rate of 69.89. But more than the numbers, it was the sheer timing of his performances, the audacity of his stroke-play and the confidence in his ability that stood out. Pant was not the first-choice behind the stumps for India on the tour - they went in with the better 'wicket-keeper' in Wriddhiman Saha in Adelaide. It was only the horror of 36 that forced them to make some changes which meant including Pant in the XI for the Boxing Day Test.

Pant walked in at a crucial stage in the first innings in Melbourne and just changed the momentum of the Indian innings with a brisk 29 off 40 deliveries. Australians were on top till he came out to bat and India needed someone to break the shackles - Pant did just that and left the rest to skipper, Ajinkya Rahane and Ravindra Jadeja. 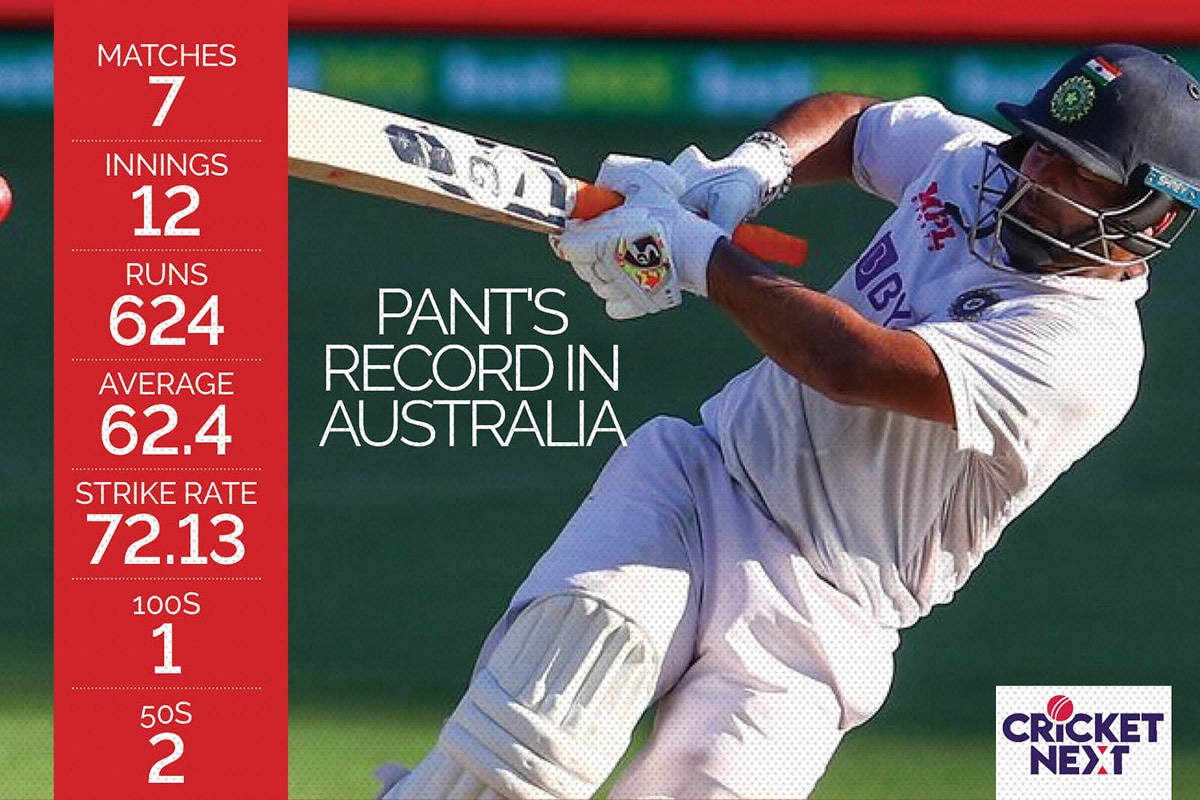 He gave a teaser of what was to come at the SCG. Pant chipped in with 36 in the first innings in Sydney but the real stuff was to come when India batted again to save the Test. Chasing 407, India had lost three quick wickets after a fine start when Pant joined Pujara in the middle. He gauged the conditions and the bowling attack, was circumspect for the first 33 deliveries he faced scoring just 5 and then produced a counter-attack for the ages - he hammered 92 off the next 85 deliveries putting together a match-changing 148-run stand with Pujara. By the time he was dismissed in the 80th over, for a scintillating 97 off 118 deliveries, he had played his part in ensuring that India had a fighting chance of not losing the Test. If he had stayed in for a while longer, then there was every chance that India would have chased down that mammoth target of 407. The sheer audacity of some of the strokes he played was good enough to frustrate as talented and skilled a bowling line-up as Australia's who had no answer to his genius.

If Pant had not been promoted up the batting order India would not have been able to break the domination of the Australian attack who in all likelihood would have ultimately broken through the defence of the Pujaras and the Viharis. But Pant derailed the Australian attack. He forced them to do things differently. He tired them. He irritated them. And due to his counter-attacking performance the Viharis and the Ashwins were able to produce the performance of a lifetime and save the Test for India and in the process kept the hope of a series win alive at The Gabba.

As in Sydney, Pant was again promoted above the last recognized batsman, Mayank Agarwal in the chase in Brisbane. This was a clear signal that India were still searching for a win and they had the confidence in Pant to lead them there. This time he did the unthinkable and took India a step further. He again found a foil in Pujara and together they put together the match-changing partnership of the match. The plan was to take the chase deep into the final session and then re-assess but Pant was always playing for a win.

After being solid in defence and playing the waiting game, Pant suddenly changed gears after Pujara's dismissal off the first over with the second new ball. With 100 still needed and an inexperienced lower middle order for company, Pant calculated that the best way to achieve a positive result for India was to go for a win. That required tremendous courage and self-confidence for if he had been dismissed playing an attacking shot the whole Indian media would be gunning for his throat! But that is what defines greatness.

Pant took the risk. He took the gamble. From 34 off 84 deliveries till Pujara's exit, Pant raced to 89 off 138 leading India to a sensational victory. This meant that his final 55 runs came off just 54 deliveries. This is what batsmen like Pant can do - change the course of a match within a matter of a few overs.

His unorthodox style and attacking stroke-play makes him very difficult to bowl to when in full flow. He can tear into the best of the bowling attacks - which is what the current Australian one is - and dominate periods of play pushing the opposition on the backfoot. He can disrupt proceedings and the opposition plans and make them defensive - which is exactly what happened again at The Gabba.

Due to his ability to score big at a high strike rate and dominate opposition attacks, Pant has the ability to change the course of a match and series from absolute hopeless situations batting in the middle order. He can make possible which for most batsmen would be impossible. This is what the great Adam Gilchrist did for Australia in the 2000s.

Pant produced two performances of a lifetime in two massive back to back Tests for his country.

He is a special player with a special ability. And he has risen to the occasion when it mattered most and how!