Ravindra Jadeja - Excelling In His New Avatar as 'Finisher'

Ravindra Jadeja has been consistently excelling in this role across formats. He was at his destructive best batting in the lower middle-order for Chennai Super Kings

Sir Ravindra Jadeja did it again! He is now doing it so consistently that it has almost become a habit. Coming into bat, with India in a spot of bother at 92 for 5 in the 14th over, he not only ensured that the team played out the entire quota of 20 overs, but also gave the innings the impetus at the death, which ultimately proved to be the difference between the two teams in the match.

Jadeja smashed an unbeaten 44 off just 23 deliveries hammering 5 fours and a six against Australia in the first T20I in Canberra. India scored 64 off the last 5 overs including 23 off Josh Hazlewood in the 19th over of the innings. This was Jadeja’s best batting performance, by some distance, in a T20I for India- not only was it his highest score but also the highest strike rate innings of his career. His previous best was just 25 and his overall numbers were, well below par, for a batsman of his calibre. This is Ravindra Jadeja in his new avatar as ‘Finisher’!

The good news for India is that Jadeja has been consistently excelling in this role across formats. He was at his destructive best batting in the lower middle-order for Chennai Super Kings in the Indian Premier League (IPL) 2020. Jadeja had an aggregate of 232 runs in 11 innings at a strike rate of 171.85 - the third-highest after Kieron Pollard and Hardik Pandya (min. 120 runs) -  in the tournament. He stood up for CSK when the likes of MS Dhoni and Kedar Jadhav failed miserably with the bat.

‘Concussed’ Ravindra Jadeja Ruled Out For T20I Series, Shardul Thakur to Replace Him

Jadeja came out to bat at 140 for 4 in the 18th over against KKR in Dubai with CSK needing 33 runs off the last 16 deliveries. He smashed Lockie Ferguson - one of the quickest bowlers of the competition - for two fours and a six in the 19th over before taking his team to a splendid win with a couple of smashing sixes. He remained unbeaten on 31 off just 11 deliveries. Coming out to bat at 42 for 4 in the 9th over, chasing 165 against SRH in Dubai, he put together 72 with MS Dhoni and was the aggressor in the partnership hammering 50 off just 35 deliveries - it was his maiden half century in the IPL. Batting at number 7, he smacked an unbeaten 21 off 8 deliveries against KKR in Abu Dhabi almost pulling off the 167-run chase. Taking a combination of runs scored, strike rate and context of performances and IPL 2020 was Jadeja’s best season with the bat. He had a strike rate of 120.45 and 120.27 in 2019 and 2018. His previous best was 2013 in which he scored at a rate of 148.88. 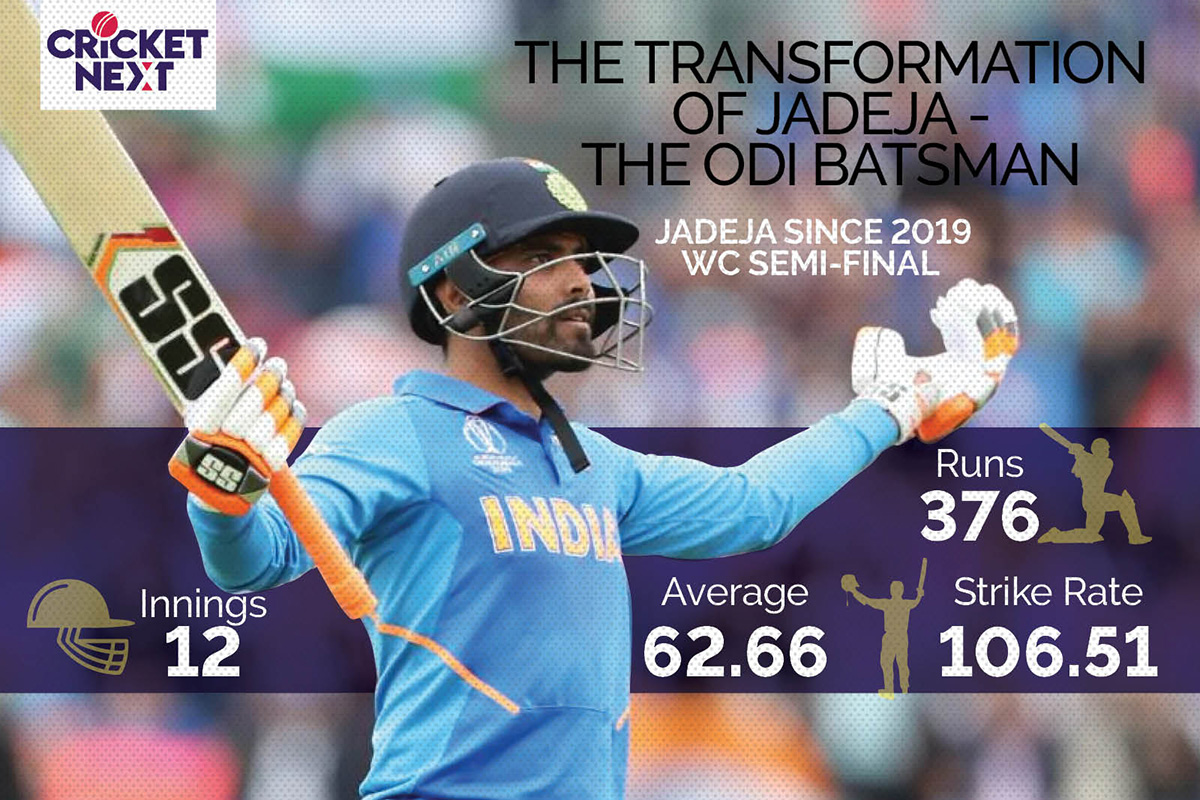 THE ODI TRANSFORMATION SINCE 2019 WC

Jadeja continued from where he left in the IPL in the ODIs against Australia - the highlight of the series an unbeaten 66 off just 50 deliveries in the third match at Canberra. Jadeja had joined Hardik Pandya at 152 for 5 after 32 overs and was involved in a match-changing unbroken partnership of 150 taking India to a match-winning total of 302. He had smashed 77 off just 59 deliveries under-pressure almost taking India to victory in the World Cup 2019 semi-final against New Zealand in Manchester in July last year. That innings reignited Jadeja - the ODI Batsman and he has constantly played the role of ‘finisher’ for India from the Number 7/8 position. Since then, Jadeja has aggregated 376 runs in 12 innings (11 from number 7) at an average of 62.66 and strike rate of 106.51.

Jadeja’s success in his new role is not restricted to limited-overs’ cricket only. The Oval, 5th Test, September, 2018: From 160 for 6, Jadeja top-scored for India with an unbeaten 86 helping India finish closer to England’s first innings’ total of 332. Although India still ended up losing the Test, that innings inspired Jadeja - the Test batsman and gave him confidence as the pivot in the lower-order. He recorded his maiden Test hundred in his very next match - against the West Indies in Rajkot. Since the Oval Test, he has aggregated 673 runs in 13 Tests (18 innings) at an average of 56.08 and strike rate of 61.68.

He scored a fine 81 off just 114 deliveries (batting at number 8) against Australia at the SCG in 2019. Later in the year, batting at number 6, he scored a quickfire 91 off just 104 deliveries against South Africa in Pune. Two qualities stand out for Jadeja in the long format - he is scoring significantly from the lower order and is getting his runs at a quick rate which always puts the bowlers in disarray and also gives the Indian bowling unit more time to bowl out the opposition twice.

Combining his efforts in all international formats, since September 2018, from positions 6,7 and 8, Jadeja has scored 1215 runs in 42 innings at a strike rate of 74.49, including one hundred and 9 fifties. His average of 46.73 is the highest amongst the 30 batsmen who have batted a minimum of 20 innings at positions 6-8 during this time-frame. Just for perspective, this means that Jadeja has a better record batting in the lower middle order than BJ Watling, Jos Buttler, Colin de Grandhomme and Mahmudullah amongst others in this period.

This new avatar of Jadeja - The Finisher - could be a game changer for India across formats in the next couple of years. And batting is not Jadeja’s stronger suit in any of the three formats. He is a genuine match-winner with the ball in Test cricket and a restrictive bowler in ODIs and T20Is.

This new prowess with the bat and coupled with that his agility in the field and we have a world-class all-rounder in Sir Ravindra Jadeja!