It has almost been a fairytale come true for T Natarajan - belonging to a humble background from a small village in Salem district of Tamil Nadu where he played tennis-ball cricket to his stint for Sunrisers Hyderabad in the Indian Premier League (IPL) 2020 to his maiden call up for India Down Under. The left-arm armer has made giant strides in 2020 and has only improved with every outing.

Natarajan was bought by Kings XI Punjab for INR 3 crores in the IPL 2017 Auctions after a stellar performance for Dindigul Dragons in the Tamil Nadu Premier League where he picked 9 wickets in 6 matches at an economy rate of just 5.39. However, he did not do justice to his talent and ability for the franchise. He picked just two wickets in 6 matches and was taken for aplenty in IPL 2017. Representing Sunrisers Hyderabad (SRH) three editions later, he impressed and was one of the finds for India in the tournament.

Natarajan returned with 16 wickets in as many matches and was the second-highest wicket-taker for SRH after Rashid Khan in IPL 2020. He was also fairly restrictive conceding at a par 8.02 runs per over. What defined his bowling in the tournament, however, was his ability to bowl yorkers at will. He delivered as many as 64 toe-crushing yorkers - the maximum by far - in the competition. His ball to dismiss AB de Villiers in the Eliminator against Royal Challengers Bangalore (RCB) was widely described as the ‘Ball of the Tournament’! 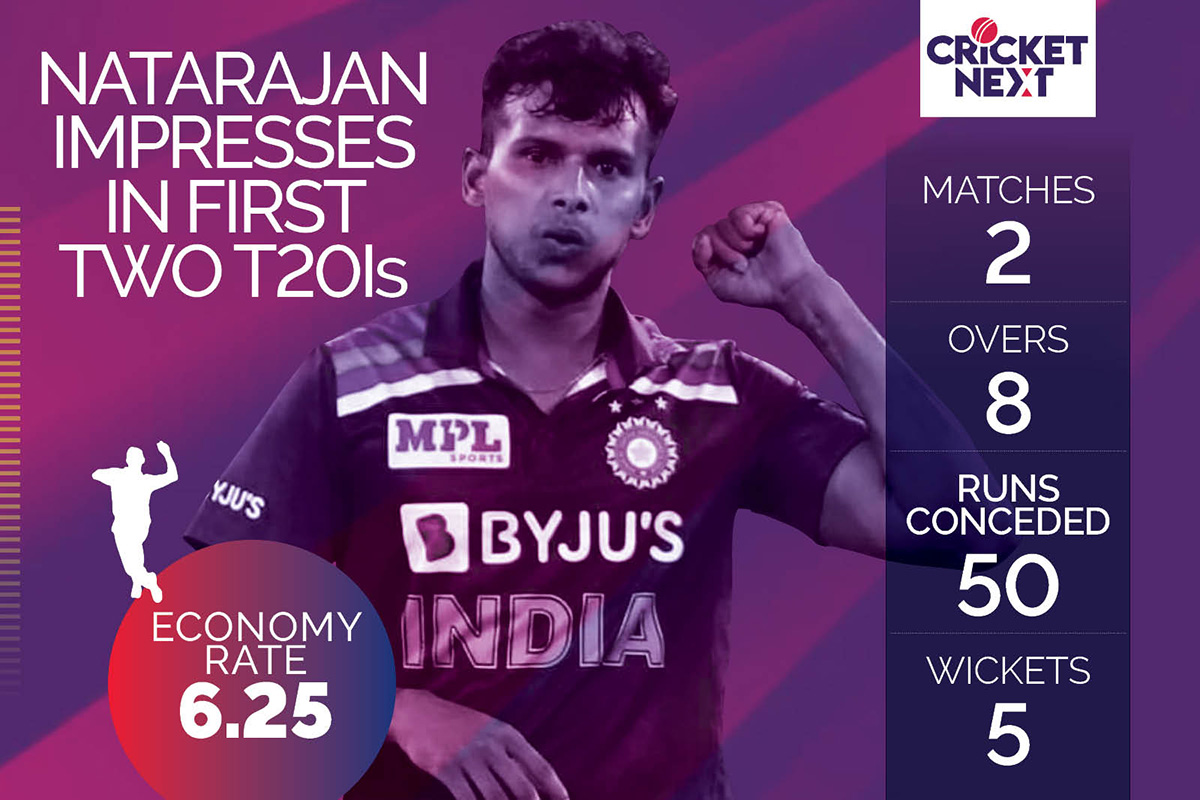 His performance in the IPL fast-tracked him to international cricket with a call-up to the national side for the limited-overs’ tour Down Under. Natarajan impressed in his very first match - the third and final ODI in Canberra! He broke the opening-wicket partnership dismissing Marnus Labuschagne in the powerplay and then bowled 5 consecutive dot deliveries to the in-form Steven Smith ending with a wicket maiden! He bowled 4 overs with the fielding restrictions and conceded just 21 runs. Natarajan then showed excellent temperament, maintaining his cool at the death and getting the last recognised batsman - Ashton Agar - thereby effectively ending hopes of an Australian victory.

If that was a fairly impressive ODI debut, then Natarajan had a great start to his T20I career for India. The visitors had set Australia a competitive 162 run target but needed wickets in the middle overs to stop the likes of Smith and Maxwell from running away with the chase. Natarajan was their Man! He gave India the prized scalp of Maxwell beating him with a skiddy back of a length delivery which trapped the destructive Australian all-rounder right in front of his stumps. Maxwell exited for just 2.

Australia re-built through Short and Henriques who had forged a potentially match-changing partnership for the 4th wicket. With 49 needed off 30 with 7 wickets in hand the home team definitely had the advantage. India needed a breakthrough. And Natarajan was their man, again! He bowled cross-seam to Short who could not resist and holed out to Hardik Pandya. Natarajan then returned and cleaned up Starc with his stock delivery - the yorker - of the first ball of the 19th. He ended with 3-30 in 4 overs on his T20I debut.

Natarajan showcased his entire range in the second T20I in Sydney and also his ability to restrict the opposition batsmen - a more important quality in T20 cricket than even picking wickets. In a high-scoring encounter where the other Indian bowlers went for a combined 173 runs in 96 deliveries at an economy rate of 10.81, Natarajan, through his variations conceded just 20 runs off his 4 overs while also bagging two big wickets.

Australia had raced to 46 without loss after 4 overs with Wade looking in menacing touch. India needed to break the partnership. The ball was given to Natarajan and he did not disappoint. He experimented with a head high short ball to Short who pulled it straight to Iyer at deep square-leg. The left-armer had picked a wicket with his third delivery. After conceding just one run off his first over, Natarajan returned to bowl the 9th over of the match with the two best Australian batsmen at the crease - Smith and Maxwell. Realising that his average pace would be tonked for runs on that true SCG wicket, the left-armer mixed it up - he bowled cutters and mixed his length bowling some slower ones not allowing any pace to the two batsmen. Natarajan conceded a single of each of his 6 deliveries in his second over with a number of mistimed shots by Smith and Maxwell.

His 15th over was perhaps his best in terms of variations - bowling to Smith and the dangerous Henriques with Australia on the charge, Natarajan bowled a low full toss, a full slower delivery, a cutter and a yorker again going for just 5 runs in his third over. He ended his magnificent spell with the wicket of Henriques with a cutter. 2-20 in 4 overs with just one boundary - it was a special match-winning effort from Natarajan in just his second match for India in the format.

While the yorker has made him famous and been his ticket to the international level, Natarajan has shown, in his three appearances for India so far, that there is much more to him and his bowling than just those toe-crushing deliveries. And significantly, he has a thinking head and a cool temperament. Also, with Khaleel Ahmed not in the mix, Natarajan’s rise has come at an opportune time for India as he fits in perfectly as the left-arm seamer along with the barrage of right-arm fast/medium bowlers in their set-up.