Vihari’s injury is one of the latest to plague the visiting team’s never-ending injury woes who are currently fighting hard to find replacements to its depleted side. 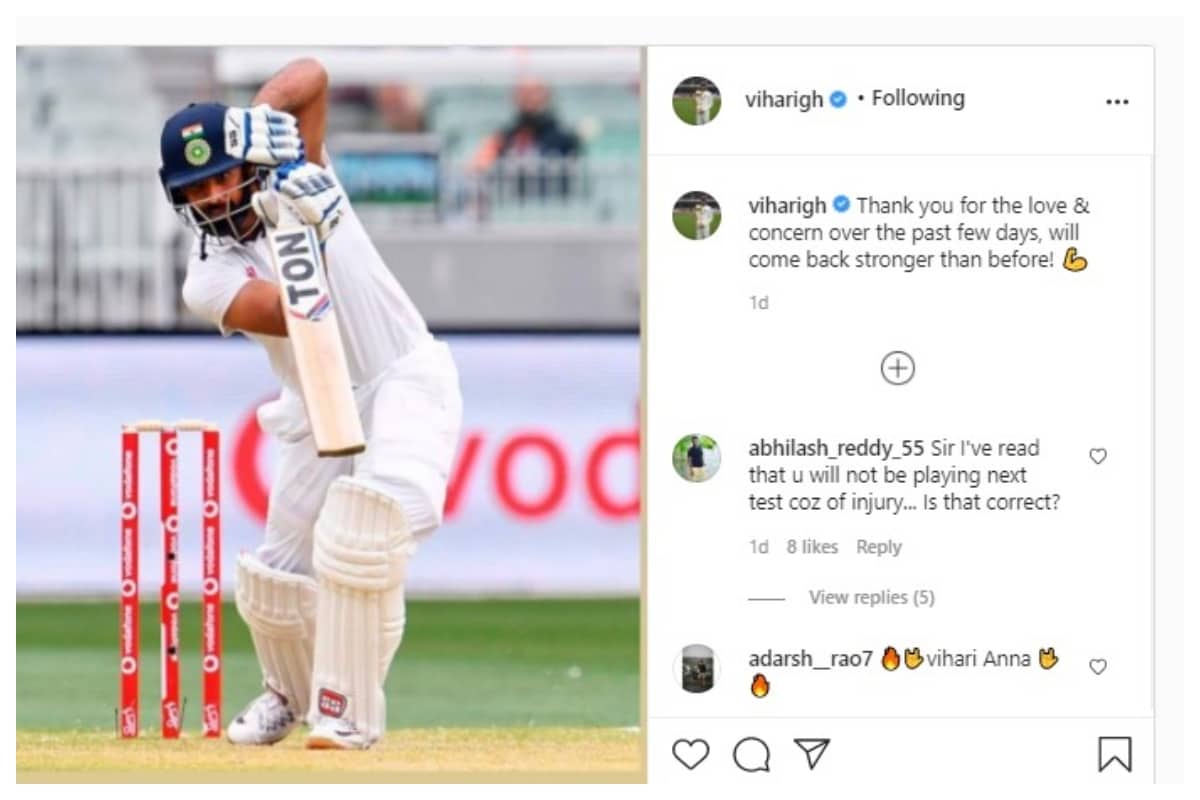 Team India managed to draw the third Test against Australia at the Sydney Cricket Ground (SCG) in the four-match Test Border-Gavaskar Trophy series. Right now, the series stands at 1-1.

However, after Monday’s thrilling draw, one of the heroes of the drawn game Hanuma Vihari has been ruled out of the fourth and final Test fixture due to a hamstring injury. Vihari’s injury is one of the latest to plague the visiting team’s never-ending injury woes which is currently fighting hard to find replacements to its depleted side.

According to an Indian Express report, after the match Vihari was rushed to take scans and BCCI sources confirmed his unavailability for the fourth Test starting on Friday, January 15 in Brisbane. The report also quoted the BCCI source confirmed to PTI, ‘The extent of Vihari’s tear can only be ascertained after the scan reports come through. But even if it’s a grade 1 tear, he is out for at least four weeks and then will need some rehabilitation time. So it’s not only Brisbane Test but also, he won’t be a part of England Tests at home’.

The Andhra batsman took to social media to thank fans and well-wishers for showering him with love and concern in recent days. Vihari posted a photo on Instagram and captioned it as, ‘Thank you for the love & concern over the past few days, will come back stronger than before!’.

Bruised, Broken, Wounded - Does India Have An XI To Field At The Gabba?

Vihari along with Ravichandran Ashwin were the stars in the hard-fought draw in the third Test of the Border-Gavaskar Trophy. The duo not only held the fort by keeping their wickets intact which paved for a drawn result. But also withstood pain, Aussie bowling attack and bouts of sledging during the course of Team India’s second innings.

In the recently concluded third Test in Sydney, Team India were saved from another Test debacle in Australia on the back of Rishabh Pant’s aggressive 97-run streak, ably followed by a match-saving partnership between Vihari and Ashwin that stood to settle for a draw.

On the news regarding Vihari’s replacement, the Indian team management has few options. They can choose between wicketkeeper-batsman Wriddhiman Saha and continue with Pant as a batsman. While they can also exercise the option to bring in struggling opener Mayank Agarwal as a middle-order batsman to counter the second new ball.