India vs Australia Test Series 2020-2021: Pujara Nears the 6000-Club, Warner and Smith's Outstanding Numbers in Sydney, Lyon 6 Away From 400 - Upcoming Records and Milestones

We look back at some of the standout numbers and upcoming milestones and records that can be broken at the SCG.

India will clash with Australia in the high octane third Test at the Sydney Cricket Ground (SCG) from the 7th of January. With the series tied at 1-1 and off-field drama adding spice to the contest and rivalry, both the teams will be raring to go and perform in Sydney. We look back at some of the standout numbers and upcoming milestones and records that can be broken at the SCG.

India has played 18 Tests at Lord’s and 14 at MCG – the top two hosts for India outside home. SCG will join the Adelaide Oval, The Oval in London, Port of Spain in Trinidad and Sabina Park in Jamaica as the venues to host India for 13 Tests. 732: Warner’s Aggregate at the SCG

Steven Smith has an aggregate of 611 runs in 7 Tests (10 innings) at an average of 67.88 including two hundreds and 5 fifties at the SCG. He scored a magnificent 115 in the first innings in the fifth Ashes Test at the SCG in 2014. A year later, in the New Year Test in 2015 against India, Smith, captaining the side, scored 117 in the first innings.

Ravindra Jadeja has scored 1926 runs and picked 216 wickets in 50 Tests. If he manages to score 74 runs in Sydney, he will join a select Club of 20 players (including 4 Indians – Kapil Dev, Kumble, Ashwin and Harbhajan) to take the double of scoring at least 2000 runs and picking a minimum of 200 Test wickets. 6: Number of Wickets Needed by Nathan Lyon to Reach the 400 Club

Nathan Lyon has a tally of 394 wickets in 98 Tests at 31.63 apiece. If he does reach the milestone in Sydney, he will become only the sixth-spinner in Test cricket history to do so. The famous five before him are Muttiah Muralitharan, Shane Warne, Anil Kumble, Rangana Herath and Harbhajan Singh. 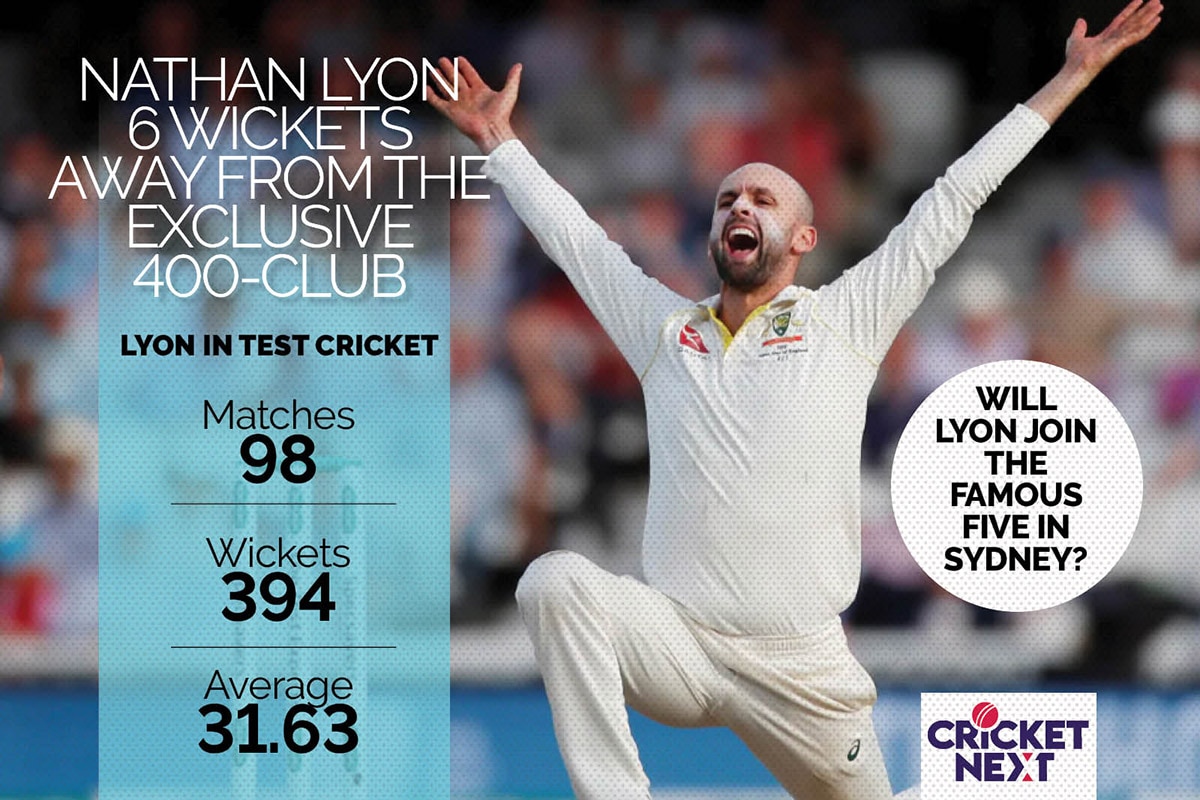 3.33: Smith’s Batting Average in the Ongoing Test Series Against India

Steven Smith has registered scores of 1, 1 not out, 0 and 8 in the 4 innings he has batted so far in the Test series against India. His average of 3.33 is the lowest for Smith in the first two Tests of any series he has been part of in his Test career – thus, this is Smith’s worst start to any Test series in his career. Since his double hundred in Manchester in September, 2019, Smith has seen somewhat of a minor slump in his Test numbers – the Australian great has aggregated just 367 runs in 8 Tests (13 innings) at an average of 30.58 with no hundreds and only three fifties in this period. Jasprit Bumrah has had a great beginning in Australia. In just 6 Tests he has picked 29 wickets at 18.82 a piece at a strike rate of 47.2. If he picks three wickets in the Sydney Test, his tally will reach 32 and he will become the second-highest wicket taker amongst Indian pacers (after Kapil Dev) in Australia overtaking the likes of Umesh Yadav, Ishant Sharma and Mohammed Shami (all on 31). Amongst all visiting bowlers who picked a minimum of 25 wickets in Australia, Bumrah’s average places him at number 5. Three of the four above him played in the 19th century. Richard Hadlee (17.83) is the only visiting bowler from the 20th century who has a better average than Bumrah in Australia.

If India’s stand-in captain scores an aggregate of 203 runs in Sydney, he will become just the 5th Indian batsman after Tendulkar, Kohli, Laxman and Dravid to reach the milestone of 1000 runs in Australia. Rahane currently has an aggregate of 797 runs in 10 Tests at an average of 46.88 with 2 hundreds Down Under.

Cheteshwar Pujara, the hero for India with the bat in the historic triumph in 2018-19, has had a quiet series so far. If he scored 215 runs in Sydney he would become the 5th Indian to reach the milestone of 1000 runs in Australia. Pujara has an aggregate of 785 runs in 9 Tests at an average of 46.17 with 3 hundreds Down Under. In fact, Pujara’s last Test hundred came a couple of years ago in the New Year Test in Sydney – he scored a brilliant 193 in the first innings in 2019. Since then, the New Wall of India has seen a major dip in his numbers aggregating just 477 runs in 11 Tests (18 innings) at an average of 26.5 with no hundreds and only 5 fifties.