India vs Australia: The Spectacular Fall of Three Indian Openers in 2018

964 runs, 43 dismissals, three hundreds including two against Afghanistan, 28 scores of below 20 in 44 innings and a combined batting average of 22.42.

964 runs, 43 dismissals, three hundreds including two against Afghanistan, 28 scores of below 20 in 44 innings and a combined batting average of 22.42.

These are the aggregate Test statistics of KL Rahul, Shikhar Dhawan and Murali Vijay opening the batting for India in 2018. This is how poor they have been. 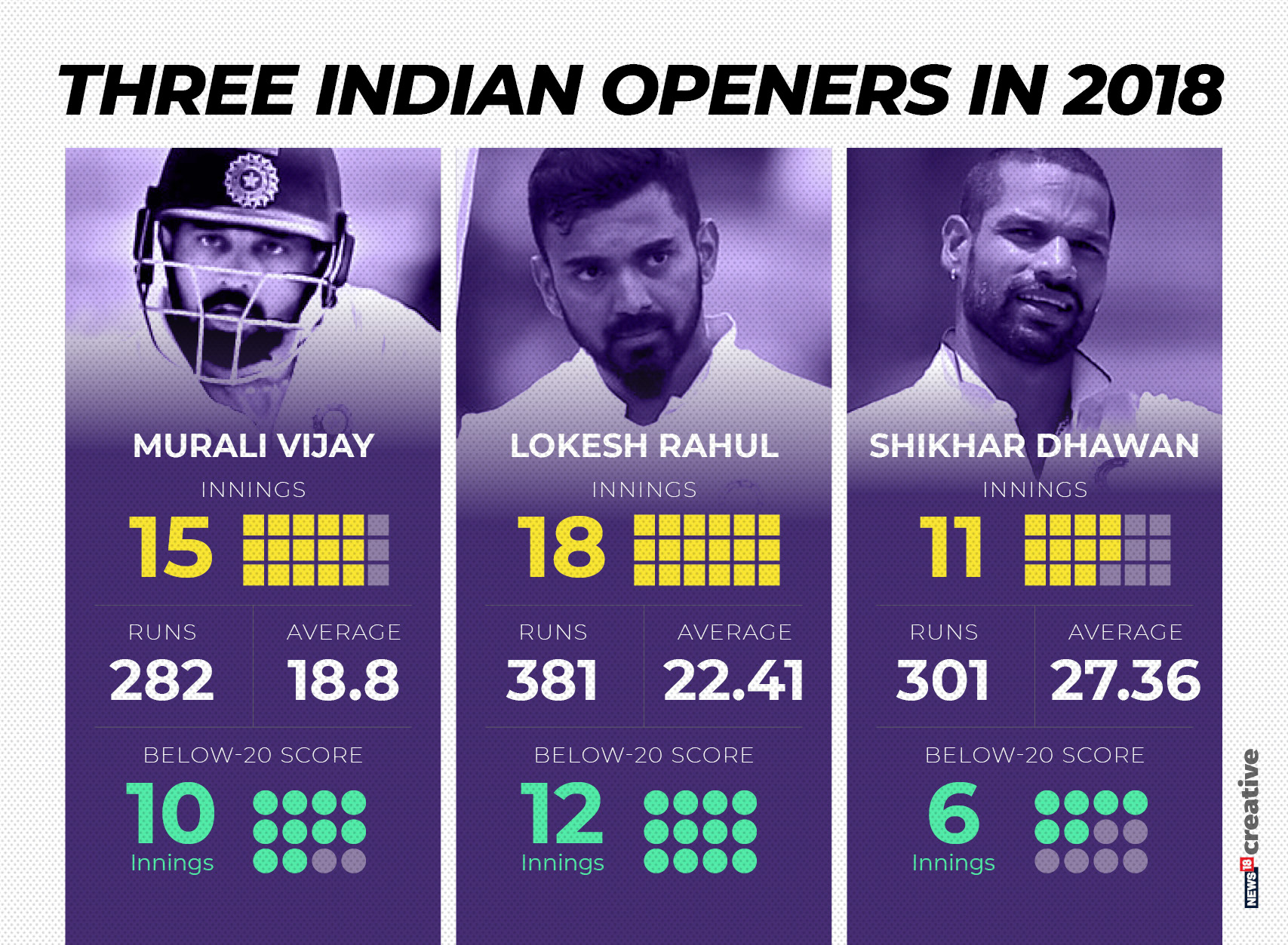 Vijay has fared the worst amongst the three with a batting average of just 18.8 in 2018. He has scored just 282 runs from 15 innings in the year. And this includes the 105 against Afghanistan! Without this hundred, Vijay has scored a meagre 177 runs from 14 innings at a paltry average of 12.64. He has no fifties in the calendar year and has registered scores of less than 20 in as many as 10 innings (out of 15) this year – this includes three ducks.

Rahul has also had a forgetful year before being finally dropped (along with Vijay) for the Boxing Day Test. He has scored 381 runs in 18 innings at an average of 22.41 in 2018. Rahul now has 11 single-digit scores in his last 23 Test innings. Barring his splendid hundred against England at The Oval, Rahul has scored just one fifty in this period – and that too against Afghanistan. Such has been his woeful run that he has 16 scores of below-20 in his last 23 innings (12 this year).

Dhawan has scored 301 runs in 11 innings at an average of 27.36 in 2018. He also registered a ton against Afghanistan but does not have any other score of 50 or above in the remaining 10 innings. In fact, he has six below-20 scores in these 10 innings.

The Indian opening-wicket partnership ranks at Number 5 in 2018 with a wide gap between the top 4 and others. No other country has as many opening stands of ‘less-than 20’ as India (14) in 2018.

Among the 25 openers in world cricket who have batted in at least 6 innings this year, in terms of batting average, Karunaratne tops the charts having scored 49.53 runs per dismissal. He is followed by Latham (48.20) and Elgar (36.81).

None of the three Indian openers make it to the top 10. Dhawan is at number 11 while Rahul and Vijay are at Number 15 and 20 respectively.

Not only have the Indian opening trio not scored runs but they have also not spent any significant time at the crease – a quality integral and necessary for any opener to succeed in Test cricket. Rahul fares worst on this count playing, on an average, just 37 balls per innings in 2018. Dhawan has not done any better playing 38 balls per innings. They rank at Number 6 and 7 amongst the 27 openers who have batted in at least five innings this year. The corresponding number for Vijay is higher at 49. This means, on an average, the trio have faced 41 balls per innings, which translates to almost seven overs per innings. In other words, the Indian openers are getting out within an hour of the start of the Indian innings. By not occupying the crease for any significant period, they are exposing Pujara and Kohli to the new ball, severely affecting India’s chances of putting up a big score. 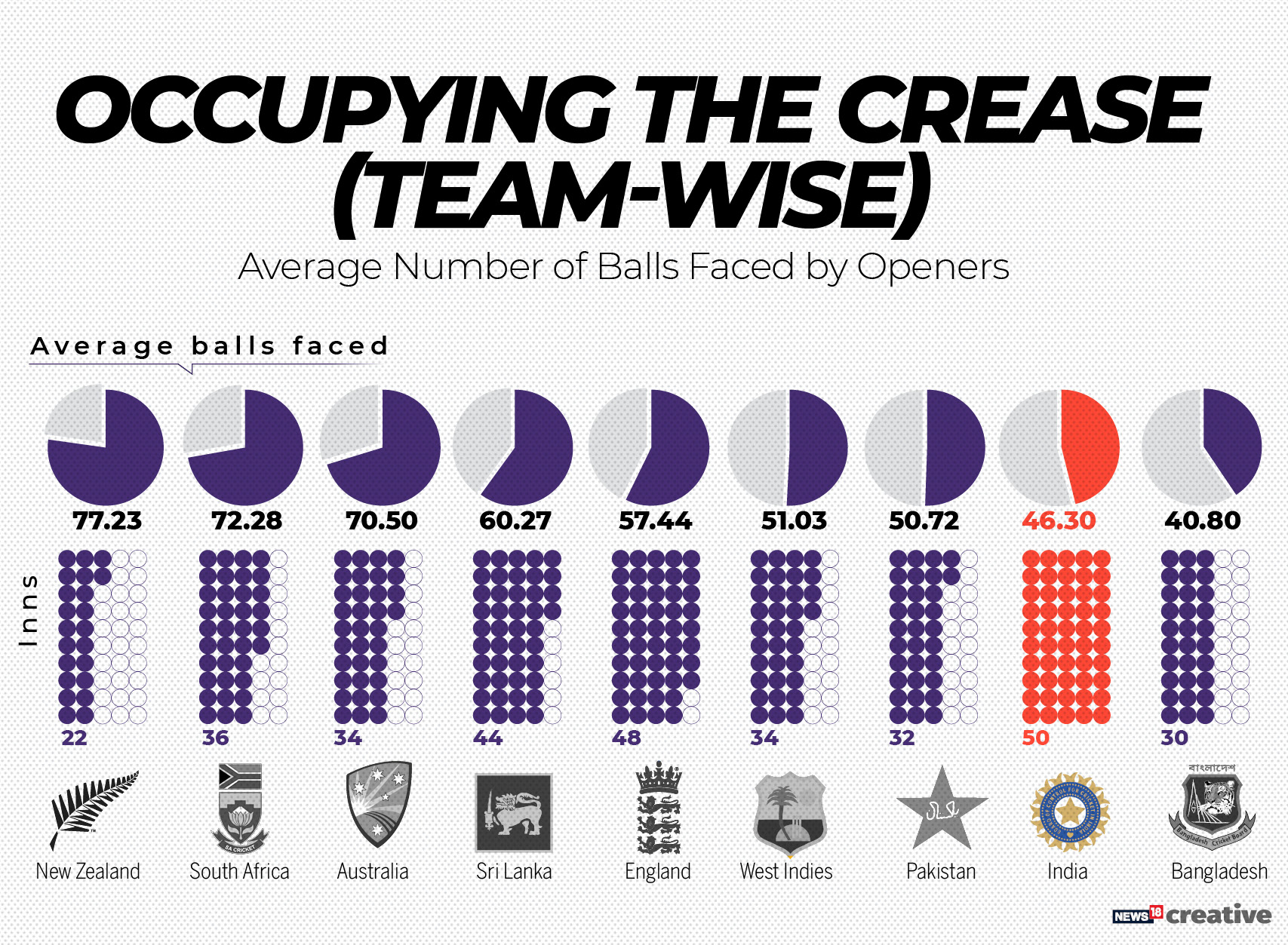 The Indian openers (all Indian openers) have, on an average, faced approximately 46 balls per innings in 2018, which is the worst for all teams with the exception of Bangladesh.

This suggests that while all teams have been poor in terms of opening partnerships, India has had the dual problem of both their openers failing collectively and consistently. 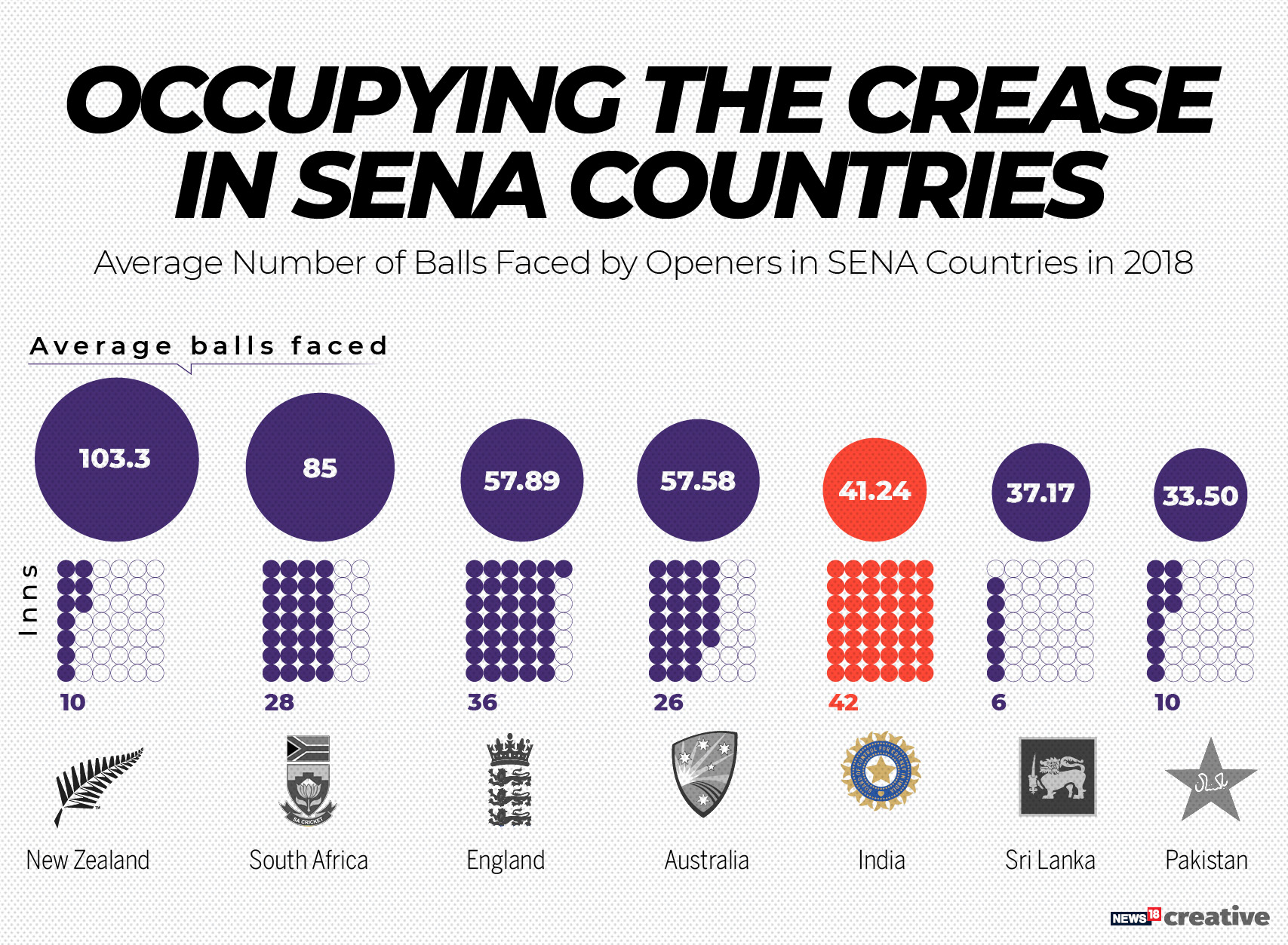 The performance of the Indian openers in 2018 has been the worst for India since 2000, in terms of average balls faced and the second-worst in terms of batting average.

While Dhawan has had problems facing the short-pitched deliveries, Rahul has been susceptible to the inswinger getting trapped lbw or bowled on a number of occasions. Vijay has forgotten the art of leaving the ball – what made him such a successful opener on previous tours to SENA countries.

It has been a mighty fall for the three Indian openers.

With Agarwal and Shaw off to impressive starts in their Test careers, it could be the end of the road for the trio of Dhawan-Vijay-Rahul in whites for India. At least for now.