With a combined average of 3.33 in the first two Tests at the Adelaide Oval and MCG, it was a timely hundred for the Australian great who had been, uncharacteristically, out of form in whites for Australia over the last 16 months Steven Smith started 2021 with a bang with a magnificent 131 in the first innings of the third Test at the Sydney Cricket Ground. With a combined average of 3.33 in the first two Tests at the Adelaide Oval and MCG, it was a timely hundred for the Australian great who had been, uncharacteristically, out of form in whites for Australia over the last 16 months. Smith held the Australian innings together, batted well with the lower order, and was the last man dismissed after his team had put a competitive total of 338 on the board.

Smith registered scores of 1, 1 not out, 0, and 8 in the 4 innings he had batted so far in the Test series against India. His average of 3.33 was the lowest for Smith in the first two Tests of any series he has been part of in his Test career. Thus, it was, in every way, the worst start the Australian has had in any series in his glorious career. Smith was tentative, defensive, and way too cautious in both Adelaide and Melbourne. He played out as many as 29 deliveries for his solitary run in the first innings in Adelaide and got a total of 8 runs off 30 deliveries in the second innings in Melbourne. He looked a bit reluctant, the energy was missing and it almost appeared he was battling to save his wicket rather than to score runs and dominate the bowling - something which one associates with Steven Smith - the Test batsman. R Ashwin had dismissed him twice in three innings and according to his own admission, the Indian off-spinner had gotten into the head of the Australian genius. 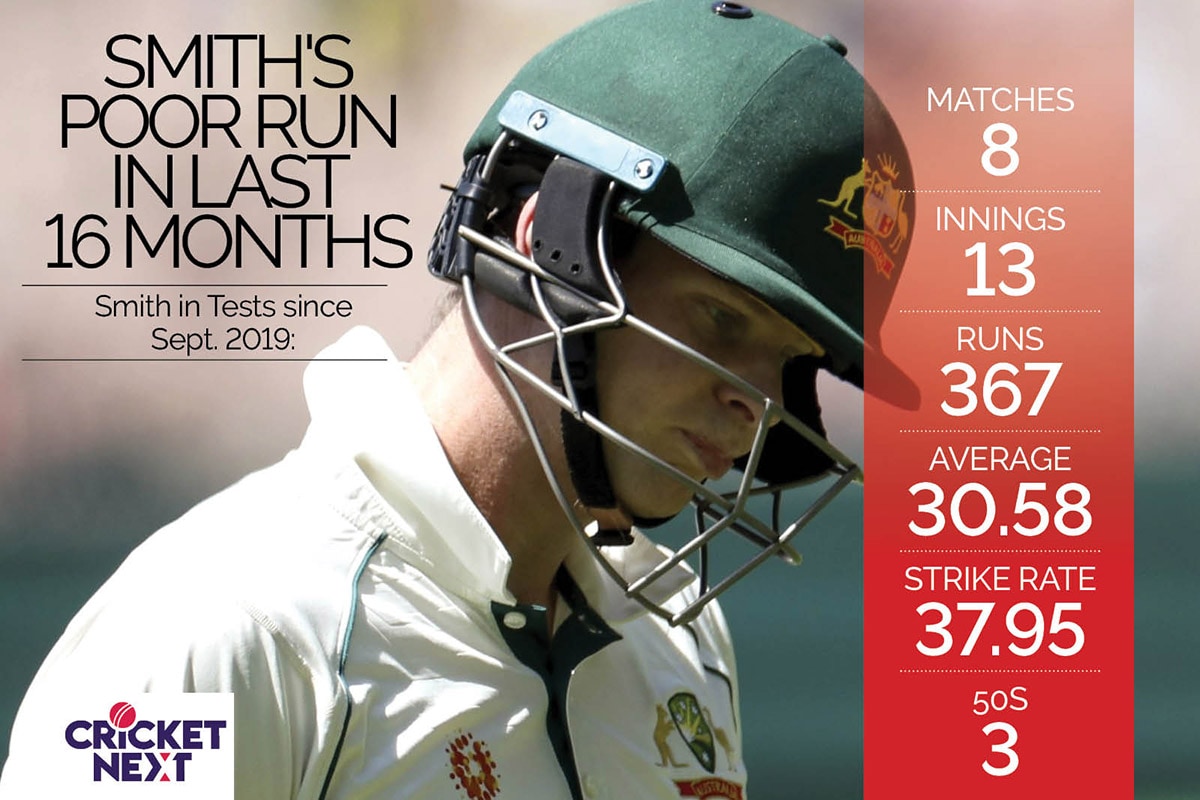 Smith had been out of form since his double hundred in the Ashes in Manchester in September 2019. By his standards, it was a slump as the Australian had only managed to score 367 runs in 8 Tests (13 innings) at an average of 30.58 with no hundreds and just 3 fifties in this period. Significantly, his scoring rate during this period was as low as 37.95 which suggested that not only was he not getting big runs but also wasn't able to score fluently, rotate the strike or get the boundaries consistently. Smith had a failure rate (percentage of dismissals below 20) of as high as 50% during this period.

Also, from August 2017 till the start of the SCG Test against India in 2021, Smith had an aggregate of 1461 runs in 9 Tests (14 innings) at a stunning average of 121.75 at a strike rate of 55.93 with 6 hundreds and 5 fifties against England - he had dominated the arch-rivals in the Ashes rivalry. But his record against the other teams was shockingly poor! Smith had scored just 525 runs in 12 Tests (21 innings) at an average of 26.25 and strike rate of 40.47 with no hundreds and only 4 fifties combined against all other opposition in this time-frame. It was almost as if, two different Steven Smiths were turning out to bat - the great one against England and a one we do not know against all the other teams.

But it all changed against India in the crucial New Year Test at the SCG.

Smith did a few things differently in Sydney. And consciously. He showed intent from the second he got to the crease. He wanted to attack and dictate terms to the Indian bowlers and that is exactly what he did. From the moment he hit his first boundary (of the series) - an off-drive off Bumrah - Smith did not look back. He deliberately went on the offensive against his nemesis, Ashwin, in the very first over of the innings bowled by the off-spinner whipping him through mid-wicket for a boundary. He then used his feet to the first ball of Ashwin's next over and lofted the spinner over mid-on for another four. Smith had raced to 24 off 25 deliveries. Not only was Smith looking to score quickly by getting the boundaries and placing the ball in the gaps for the ones and twos, but he also was playing late and letting the ball come to him. Instead of letting the Indian bowlers dictate the line and length, they wanted to bowl to him, his early intent and aggressive play meant that Smith was making them bowl in his strong scoring areas. He forced India to change their successful 'leg-side theory' against him and unsettled the bowlers. When the second new ball was taken, India, unsuccessful with the leg-side strategy in this game, moved to attack Smith in the traditional areas on or outside the off stump.

Smith registered his 27th Test hundred and equaled the great Australian, Allan Border, Virat Kohli and Graeme Smith on the count. He also became the second-fastest to the landmark (136 innings) after Sir Don Bradman (70 innings) breaking the record of Kohli and Sachin Tendulkar who took 141 innings each! Smith also overtook King Kohli's Test aggregate of 7318 runs during the course of his magnificent hundred.

He was eventually dismissed for 131 off 226 deliveries - his aggressive intent and positive attitude to attack the Indian bowling was the differentiator between the Steven Smith of today and the one over the last 16 months.

It was another feather in his astonishing record at the SCG in Sydney, his home ground, where he has now aggregated 742 runs in 8 Tests (11 innings) at an average of 74.2 with 3 hundreds and 5 fifties. It was a timely return to form for the great Australian for his innings could be the difference between the two sides in this match and the series.