India vs Australia | Vasu: Adelaide History, India Get Down to Business at Perth

While India’s afternoon session was an optional one, almost every player was at the ground although the intensity levels varied.

Perth: “Eyes on the ball, eyes on the ball!” Ravi Shastri’s familiar baritone rang around the empty stands of the Western Australia Cricket Association Ground as Rishabh Pant had a healthy whack at a pull shot from a local bowler and failed to connect. India will take on Australia at the Perth Stadium, a different venue, but it was at the storied WACA that they had their centre-wicket practice two days before the second Test match.

While it was bright and clear, a cool breeze helped keep things comfortable, and the only really hot day forecasted for the coming week is the first one of the Test where the mercury could top off at close to 40 degrees centigrade.

While India’s afternoon session was an optional one, almost every player was at the ground. Rohit Sharma, who jarred his shoulder while fielding in the first Test, was not around, and information about his fitness status was not forthcoming from the Board of Control for Cricket in India (BCCI). 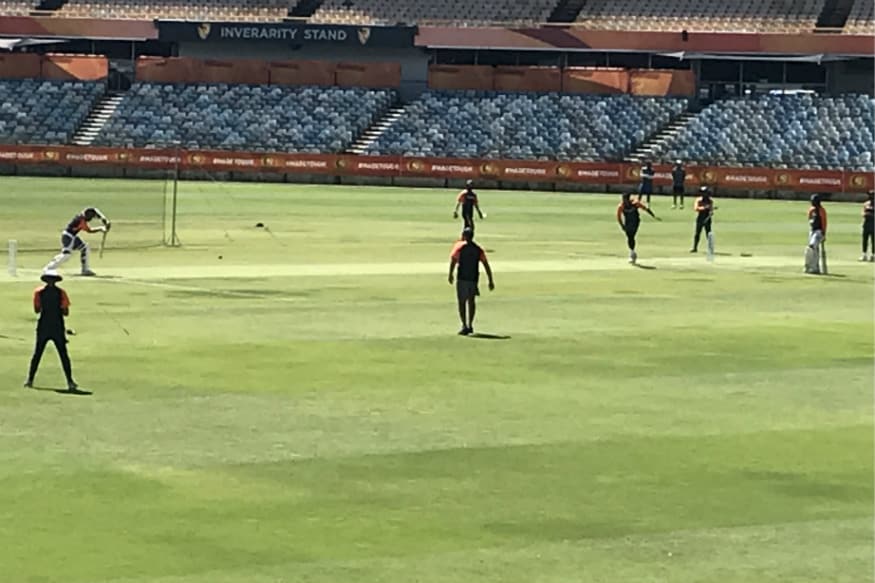 But, most others were at the ground, although the intensity levels varied. After a tight game in Adelaide, with a quick turnaround, it made sense for those with the heaviest workloads to take it easy, but even they did not take the option of cooling heels at the hotel. Instead, some had a gym session at the ground, some had longish fielding drills and others took throwdowns.

M Vijay, who could not make the most of the two opportunities in Adelaide, worked with Sanjay Bangar, the batting coach, at an outside net, leaving, leaving, leaving and leaving balls that came his way. The left-handed throw-down specialist from Sri Lanka, Nuwan Seneviratne, was at hand to approximate Michell Starc, and the cries of “That’s it Vij. Well left Vij. Good call Vij,” from Bangar reflected the solid session that Vijay was having.

On a day when all eyes were on practice and preparation, it made sense for Bharat Arun, the bowling coach, to front the press. “It’s very simple work. Each time they come to the net and they bowl, they need to be aware of their plans and what they need to execute,” said Arun on what the players were attempting to get out of their sessions. “Each time it’s a little different of what they need to execute. We just test as to how far they’ve executed each time. That feedback allows them to be more consistent.”

With Adelaide behind them and much being spoken about the pace and bounce expected in Perth — the curator has gone as far as predicting a four-day match — Arun spoke of the need to guard against getting carried away. “You can be carried away by the extra pace and bounce, but again you need to understand that on any responsive track what is really going to be successful is your consistency,” said Arun. “And that is what we’re going to work on with the bowlers.”

While there was plenty of focus on consistency, there was also anticipation over the spicy pitch that was on offer. “With a little help from the wicket, obviously the bowlers would love to bowl on those type of wickets,” said Arun, while appreciating his bowling group. “It’s a great feeling now from the Indian perspective that the fast bowlers are doing a great job and it’s not just one or two, there’s a bunch of bowlers who are doing well. It’s not about doing well – it’s the effort and consistency with which we are able to perform over a period of time. That’s very encouraging.”

But, it was not all about fast bowlers. The workload that Ashwin shouldered, the control and economy that he brought to proceedings, came in for much praise. “Spinners mature a lot with age. Maybe they’re like wine,” said Arun. “Ashwin has been really good and the last match he helped us to control – he gave us the control, bowling close to 90 overs for 147 runs and six wickets. You can’t ask anything better. he allowed the fast bowlers to take turns and he could control from one end. That’s the job he was interested in. I think he did that exceptionally well.”

So what made this change possible from the Ashwin of 2014 to the Ashwin of 2018? “Ashwin has been extremely confident – he’s aware of what he’s doing and most of the conversations linger around… I think it’s important that a spinner discovers the things he can do,” said Arun. “For that to happen, a coach can give the necessary feedback because most often what the bowler’s think they’re doing and what they’re actually doing can be two different things. If you can bridge that gap, that’s when the bowlers can grow.”

And, naturally, Arun was asked about Virat Kohli’s gesture of giving up his First Class airplane seat to allow the fast bowlers to make the trip to Perth in comfort. “Fast bowlers are a precious commodity and they need to be taken care of, like what you do with a racehorse and that’s exactly what’s happening.”

And, with that happening, the results are also lining up for India.