Back to News18
IPL 2020
Home » Cricket Home » News » India vs Australia: Yuzvendra Chahal or Kuldeep Yadav? Who would be India's Specialist Spinner in the ODI Series

India vs Australia: Yuzvendra Chahal or Kuldeep Yadav? Who would be India's Specialist Spinner in the ODI Series

Till a couple of years ago, this would be a no-brainer. From about June 2017 till the beginning of 2019, Kuldeep Yadav and Yuzvendra Chahal were amongst the leading spinners in ODI cricket bamboozling the opposition batsmen all over the world. An Indian XI without the two match-winning wrist spinners was unimaginable! Till a couple of years ago, this would be a no-brainer. From about June 2017 till the beginning of 2019, Kuldeep Yadav and Yuzvendra Chahal were amongst the leading spinners in ODI cricket bamboozling the opposition batsmen all over the world. An Indian XI without the two match-winning wrist spinners was unimaginable!

But things have changed quite dramatically in the last year and a half. Ravindra Jadeja's restrictive bowling and his ability to play the role of the finisher, a good example of which he also gave in IPL 2020, coupled with Kuldeep Yadav's indifferent form in ODIs and the last couple of editions of the IPL, have meant that Chahal in all likelihood will be the specialist spinner option for India in the upcoming ODI series against Australia. However, the left-arm chinaman bowler had had a great start to his ODI career and remains the fastest Indian spin bowler to 100 ODI wickets - the think tank will have this in mind before selecting the final XI.

Assuming that Jadeja will start in the XI as the second all-rounder after Hardik Pandya, which of the two wrist spinners will be seen in the Indian jersey at the SCG on November 27? Let us breakdown their numbers and analyse. 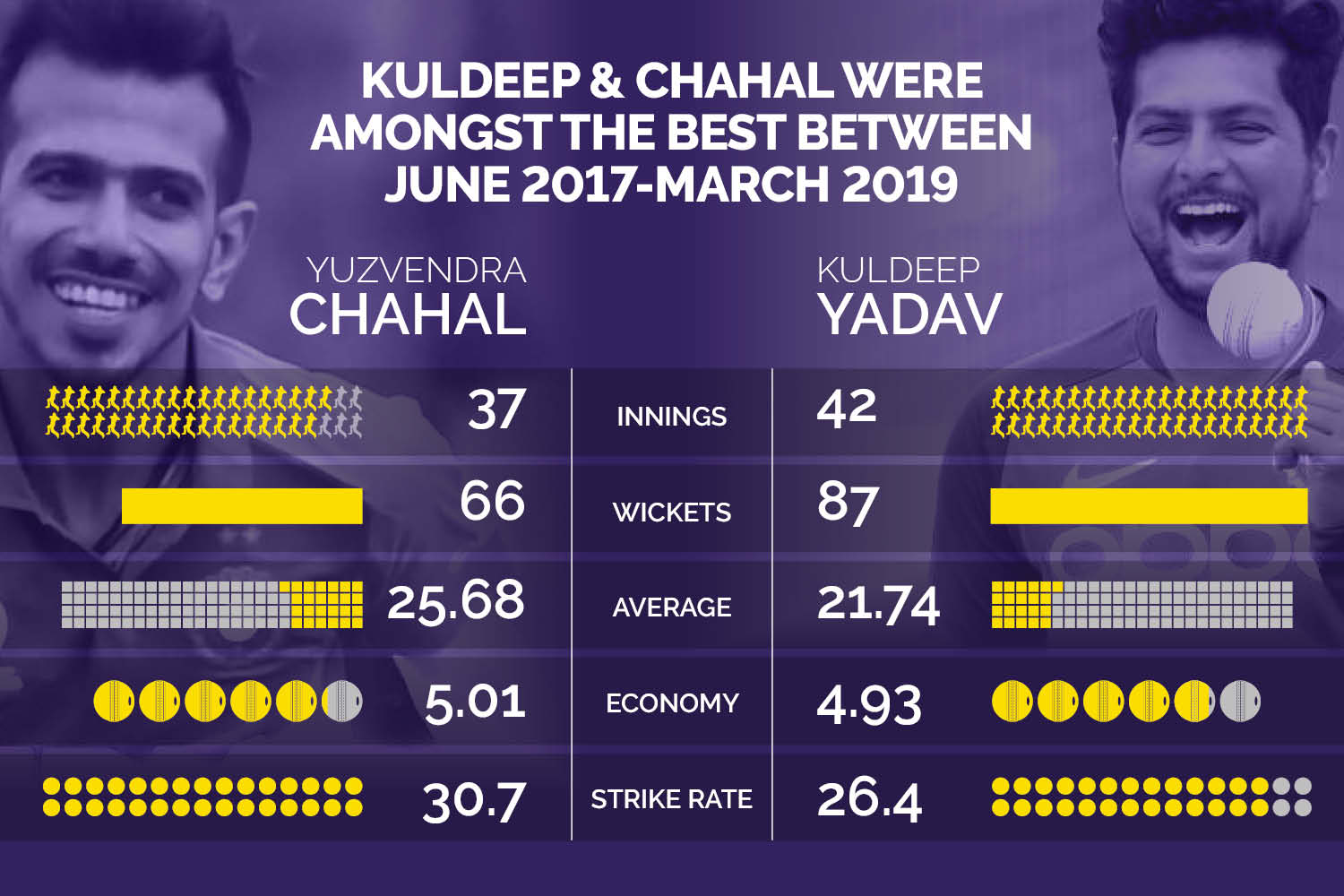 Kuldeep Yadav and Yuzvendra Chahal were the leading wicket-takers in the world in ODI cricket from June 2017 (Kuldeep's ODI debut) till the end of the home series against Australia in March, 2019. Kuldeep was at the top of the charts with 87 wickets in just 42 innings at a stunning average of 21.74 and strike rate of 26.4. He was also very restrictive with an economy rate of just 4.93.

Chahal, during this period, had accounted for 66 wickets in 37 innings at 25.68 apiece striking approximately every 30 deliveries. So while Chahal was very good, Kuldeep's returns still trumped the leg break bowler in this time-frame.

A DRAMATIC FALL FROM IPL 2019 IN KULDEEP'S WICKET-TAKING PROWESS 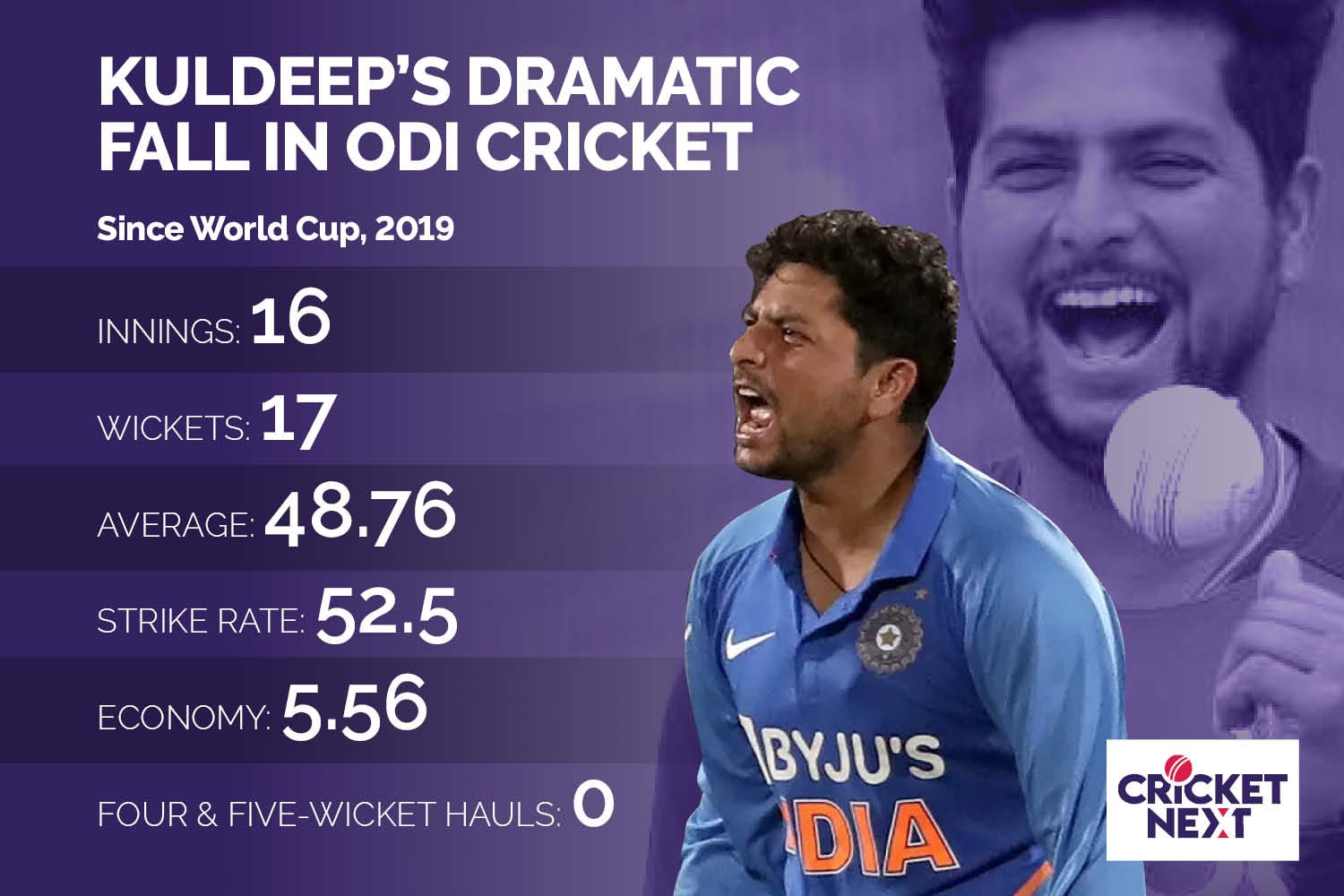 Kuldeep Yadav was the joint highest wicket-taker for KKR in IPL 2018 with 17 wickets in 16 matches at a strike rate of 18.1. But in a dramatic fall in form, his numbers took a beating in 2019 where he managed to pick just 4 wickets in 9 matches at a shocking average of 71.5 and strike rate of 49.5. He was also taken for aplenty conceding at 8.66 runs per over.

This form rubbed onto his performance for India too. Kuldeep lost his major weapon in ODI cricket - his wicket-taking ability which made him so dangerous in the format. Although he was restrictive, he accounted for just 6 wickets in 7 matches in the World Cup in England in the summer of 2019. From the beginning of the tournament till February, 2020, Kuldeep has picked just 17 wickets in 16 matches at 48.76 apiece. His strike rate of 52.5 places him at number 22 of the 28 spinners who have picked at least 10 wickets since mid March 2019.

From picking two wickets every time he bowled in an ODI match, Kuldeep has barely managed to pick one in this period. He had taken 4-plus in an innings on five occasions between his debut and March 2019 but has failed to do so even once in the period after.

His terrible form continued in the IPL and he was relegated to the second spinner's position even for KKR with Varun Chakravarthy taking his place in 2020. Kuldeep managed to take just one solitary wicket in 5 matches for KKR this season.

DIP FOR CHAHAL TOO BUT NOT SO DRASTIC 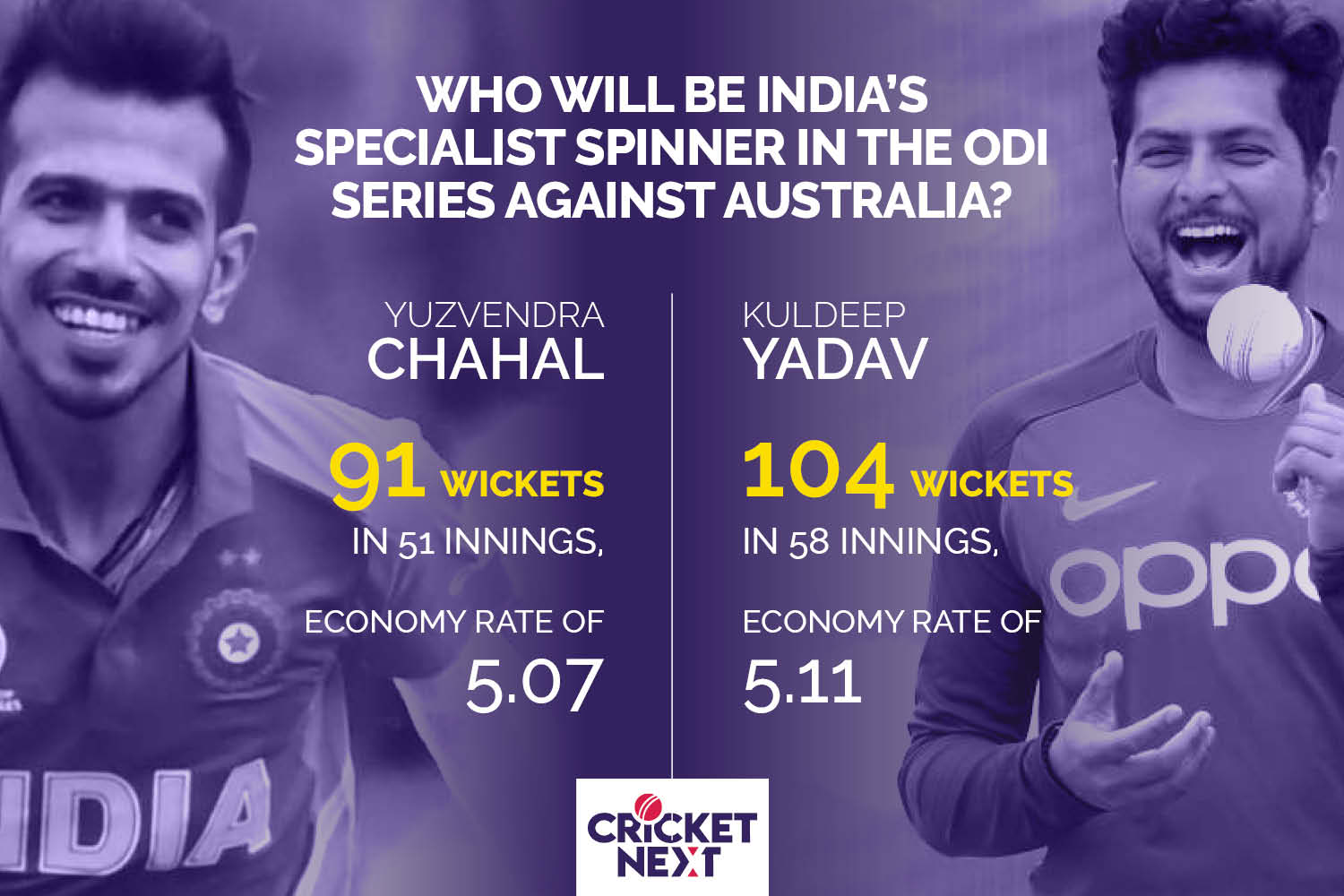 Chahal has also seen a dip in form but it has been marginal. While he is still striking almost every 32 deliveries (amongst the best in the world), the leg spinner has been a little expensive and has gone at a rate of 5.73 runs per over since March 2019. He has picked 19 wickets in 11 matches at 30.47 apiece in this period.

Also, in complete contrast to Kuldeep, Chahal has been the leading wicket-taker for RCB, both in 2019 and 2020 and their playmaker with the ball in the middle overs.

CHAHAL HAS A BETTER RECORD VS AUSTRALIA

Chahal's superior record in the format against Australia should seal the debate in his favour. He has picked 15 wickets in just 7 matches against them at 23.73 apiece at an economy of 5.65. This includes his 6-42 at the MCG - the best bowling figures in Australia by an Indian bowler - in the series decider in January, 2019. Kuldeep, on the other hand, has been expensive against the Australians and conceded at a rate of 6.07. He has also not been very threatening picking just 22 wickets in 15 matches at 39.5 apiece.

Overall, there is not much to choose between the two wrist spinners in terms of their career numbers but the international form, form in the last two seasons of the IPL and comparing their records against Australia, tilts the balance heavily in favour of the leg spinner.

It will be surprising if Chahal does not start in the XI for India on the 27th.