India vs Bangladesh, ICC U-19 World Cup, Highlights: As it Happened

INDIA WIN: And that's it. Kamlesh Nagarkoti gets the third wicket, and that's the end of the match. India has outplayed Bangladesh in every department. India are through to the semis. They win by 131 runs.

And with nothing to lose, Bangladeshi tail-enders are going for it. Shiva gets hit for two consecutive sixes, a very rare sight. That won't make any difference in the game as the score stands at 134/9.

Now with just only one wicket left, it remains to be seen who gets the last wicket, and add another one to their tally. Till now it has been a clinical performance by the Indians in all the departments.

NAGARKOTI STRIKES: That's the ninth wicket for Team India. They are just a wicket away from a place in the semifinals. Abhishek takes a simple catch, as Nagarkoti gets his second wicket of the day.

WICKET: That's another one down. This time it's Abhishek again. He bowls a knuckle ball, as the batsman drives it towards the mid-wicket fielder. Riyan has no problems in taking the catch. It's 118/8.

Mavi returns for another over. He has looked really good till now, having picked two wickets. He will certainly get more if he maintains that off-stump line. Bangladesh are 118/7.

WICKET: And this time Abhishek comes to the party. The spinner dismisses Qazi for a duck. The bowler gets a perfect carom ball that comes back into the stumps. It's all happening very fast here. Bangladesh are 107/7.

WICKET: Here is a wicket for Mavi. He pitches the ball full, as the batsman goes for a fierce drive, only to get an edge. The ball comes crashing into the stumps. Bangladesh lose another, it's 106/6.

So after a long while a boundary coming for Bangladesh in Riyan's over. Their score is moving at snail's pace right now. This match looks far from over. It's 106/5.

There is no respite for the Bangladeshi batsmen. From one end it's Anukul who is keeping things tight, and from the other Shiva. Now the run-rate required has moved upto seven. The chase looks out of bounds for Bangladesh now. They are 91-5 after 29 overs.

Another left-arm spinner continues from the other end. This is probably the only bowler where Bangladeshis have managed to get some runs. That too only in singles. And between all this there is another mix up. There is another run-out. Bangladesh are 85/5.

WICKET: That is tragedy for Bangladesh. Hridoy is run-out. This is some brilliant work by the Indians fielders, and they are top now. All it took was a direct hit from Mavi to get India their fourth wicket.

WICKET: Anukul Roy, the spinner who has impressed so much in this world cup comes back for the second over. And the batsmen have a difficult time in tackling him. On one ball he makes the batsman take the aerial route, and the ball goes in the air. But lands safely. The very next ball He makes Pinak go for a rash shot, and gets his wicket. It's 76/3.

Another pacy over from Nagarkoti comes to an end. This boy is so quick that the opposition batsmen are finding it difficult to get middle of the bat. On the last ball he bowls a brilliant yorker on the fifth stump, and the batsman had no clue about it. Bangladesh are 61/2 after 19 overs.

Riyan bowls a relatively quiet over. But on one occasion skipper Prithvi Shaw is hit on the knee while standing at slips. Bangladeshi batsman Saif got an edge, and the ball bounced awkwardly, and hit his knee. Just two runs coming from the over. Bangladesh are 58/2.

WICKET! And after a small drinks break India gets a wicket. Nagarkoti gets his first. Pitches the ball up, and instantly gets the reward. The batsman goes for a drive, but only to edge it. Bangladesh are 55/2.

Nagarkoti keeps it on the good length in the next over. Pinak and Shah are finding it difficult to deal with the pace of Nagarkoti, but manage to get some runs. The run-rate is creeping up for Bangladesh. It's 54/1.

Off-spinner Riyan comes for his second over, and he gives away seven runs in that. He is keeping the lines tight but somehow the Bangladeshis are getting runs off him. It's 49/1 after 14 overs.

It's a good over from Kamlesh Nagarkoti, his second one. Just a boundary coming from it. The Bangladeshi batsmen are not trying anything flashy here, as the target still seems in their reach. They are 42/1 after 13 overs.

India, as expected has done well in the quarterfinal against Bangladesh. The match is in India's control right now, after setting a target of 266 runs. The bowlers have done well to keep the Bangladeshi batsmen quiet, and have just given away 37 runs in the 12 overs. Hello and welcome to cricketnext's live blog for the U-19 world cup quaterfinal. 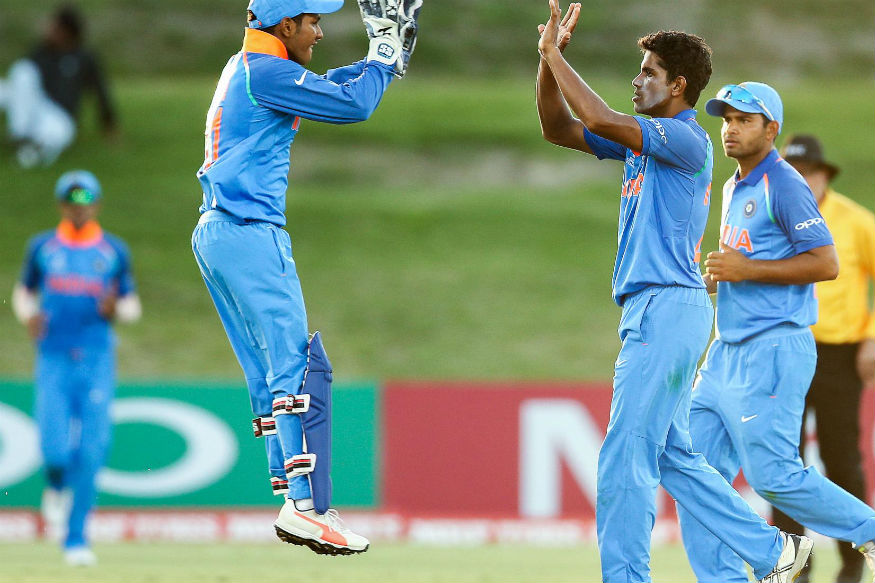 PREVIEW: An unbeaten India will start overwhelming favourites but will have to guard against complacency against a tricky Bangladesh in the quarterfinals of the ICC U-19 World Cup here on Friday. Three-time champions India were hardly tested in the league stage where they thumped Australia, Papua New Guinea and Zimbabwe to top Group B. They meet Bangladesh who finished second in Group C after the loss against England in their previous game. Both teams would be fresh going into the knockout fixture. Bangladesh faced England last Thursday while India completed a 10-wicket rout of Zimbabwe on Friday. When they take the field, India would also have in mind the loss they endured against Bangladesh that knocked them out of the Asia Cup in Kuala Lumpur last November.

However, key players like captain Prithvi Shaw did not take part in that tournament. While Bangladesh played against England at the Queenstown Events Centre, India were based in Mount Maunganui through the league stage. It is worth mentioning that the last match here, the quarterfinal between England and Australia, was a low-scoring affair with Australia able to defend a meagre 127. England were shot out for 96 with leg-spinner Lloyd Pope picking up eight wickets. Both India and Bangladesh boast of players with first- class experience. While six of India's squad have played in Ranji Trophy, five Bangladesh players, who took the field against England,

have featured in the National Cricket League back home. Left-arm spinner Anukul Roy has been the leading wicket-taker for India with 10 scalps while skipper Shaw and Shubman Gill have been among the runs.

The batting, however, has not been tested fully so far as India's two wins in the league stage came with a 10-wicket margin. Injured pacer Ishan Porel might be able to return for the

key game though India have enough fast-bowling firepower courtesy Shivam Mavi and Kamlesh Nagarkoti. The highly-rated Indian batsmen will need to be wary of Bangladesh medium pacer Hasan Mahud and off-spinner Afif Hossain, who both have five wickets to their name in three appearances.

All-rounder Hossain has also made a significant contribution with the bat, scoring 124 runs at 41.33. Their leading run-getter has been number four Towhid Hridoy (134 runs), who smashed a match-winning 122 against Canada.