Back to News18
Home » Cricket Home » News » India vs England 2021: Axar Should Replace Nadeem & Kuldeep Must Play in Place of Sundar in Second Test in Chennai

India vs England 2021: Axar Should Replace Nadeem & Kuldeep Must Play in Place of Sundar in Second Test in Chennai

After the drubbing at the hands of England in the series opener in Chennai the home team will look to come back hard and draw level when the second match of the four-Test series starts at the same venue from the 13th of February. India have a few selection issues and a few dilemmas before taking the field on Saturday. After the drubbing at the hands of England in the series opener in Chennai the home team will look to come back hard and draw level when the second match of the four-Test series starts at the same venue from the 13th of February. India have a few selection issues and a few dilemmas before taking the field on Saturday. Should they drop Shahbaz Nadeem who looked lacklustre in the first Test and draft in the fit again Axar Patel? Is there space for the Chinaman Kuldeep Yadav? What about Mohammed Siraj - the highest wicket-taker for India in Australia?

Let us look at what should be India's likely XI in the all-important second Test in Chennai.

Rohit Can Be Dropped? Not Happening!

Rohit Sharma has now failed in four consecutive innings at home since making a magnificent debut at the top of the order for India in 2019. He could muster just 6 and 21 against Bangladesh in Indore and Kolkata in 2019 and scored 12 and 6 against England in Chennai. But Rohit is one of India's best and the potential to do a Sehwag in conditions at home - score big runs at a very high strike rate - which not only demoralizes the bowling attack but also creates time for the Indian bowlers to bowl the opposition twice. Also, Rohit played a good hand opening the innings in tough conditions in Australia. There is some chatter about drafting in Mayank Agarwal. Not happening!

Rahane Should Be Dropped. Again Not Happening!

Ajinkya Rahane is the only batsman in the top 5 whose position should be under the scanner. Barring his splendid hundred at the MCG Rahane's returns in Test cricket have been shockingly poor since 2020. From the tour to New Zealand till the end of the series opener against England in Chennai in 2021, Rahane has an aggregate of 360 runs in 7 Tests (14 innings) at an average of 27.69 with just one hundred (MCG) and no fifty! If we remove the magnificent 112, Rahane has scored just 248 runs in the other 13 innings at a paltry average of 20.67 with a highest score of 46.

India play just 5 specialist batsmen at home and cannot afford to have their number 5 to have a prolonged period of poor returns no matter what he has achieved in the past. And there is a very talented batsman named KL Rahul in the squad warming the bench!

But the Indian skipper, Virat Kohli made it clear that Rahane is a senior member of the team and one of India's best batsmen indirectly suggesting that there is no way he would drop him from the XI. 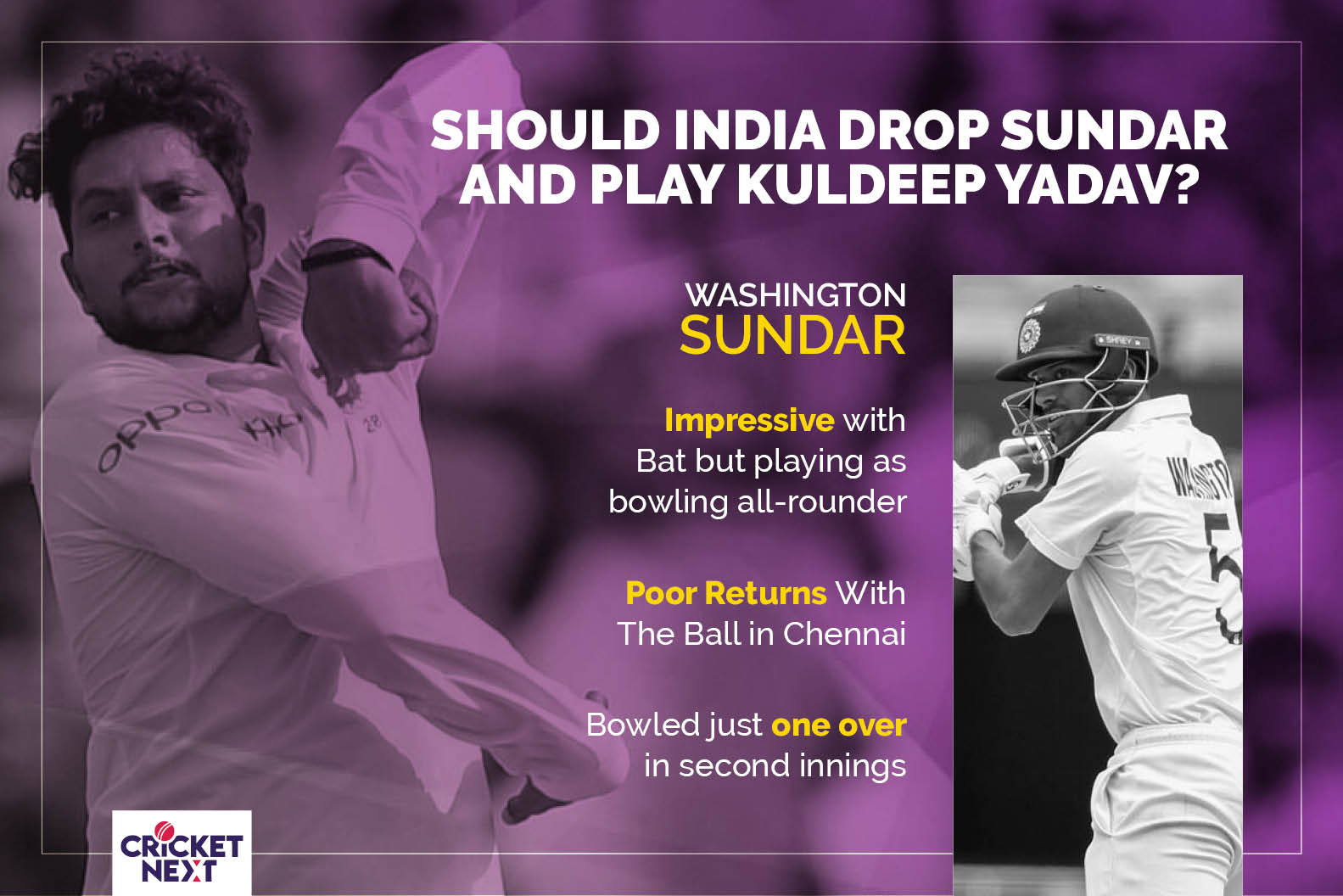 Axar Patel Will Play in Place of Nadeem

Shahbaz Nadeem was poor on the first day in Chennai bowling a number of short-pitched deliveries which were cut away for a number of boundaries by the England batsman. He could neither give India the breakthroughs nor was able to restrict the opposition batsmen. On the contrary, his lack of discipline and inconsistent line and length meant that he let go of the pressure built by the three senior bowlers in the team.

Nadeem was the most expensive Indian bowler in the first innings conceding 167 runs in his 44 overs bowling just 4 maidens. Although he was better in the second innings he still went for 66 runs in his 15 overs. He was also guilty of delivering as many as 9 no balls in the match - unforgivable for a slow bowler at the highest level in the game.

Axar Patel is yet to play a Test for India but has the experience of representing the country in 38 ODIs and 11 T20I matches. Axar's greatest strength in limited-overs' cricket is his accurate and measured bowling and excellent ability to restrict the opposition batsmen. India need that control from one end, especially if they lose the toss again and are in the field.

Axar has also played 39 first-class matches in which he has picked 134 wickets at an average of 27.38. He is more than a useful bat in the lower-order and has an average of 35.42 with one hundred and 13 fifties at the domestic level. Axar last played an international for India in February 2018 - a T20I against South Africa in Cape Town.

Washington Sundar has been mighty impressive in the two Tests he has played for India - but maybe in the wrong discipline. His batting has been exceptional. A match-changing performance in Brisbane and a masterclass unbeaten 85 in Chennai - both knocks delivered under high pressure showcasing not only his skill with the bat but temperament and mental toughness.

But Sundar is not playing in the XI as the batting all-rounder. At number 7 he is the bowling all-rounder in the team and from whatever evidence he has given so far, as good as he is in limited-overs, he is not quite up there at the Test level just yet. Sundar is not a wicket-taking bowler - not even in T20 cricket but his strength essentially is his disciplined bowling and economy rate - as he displayed in the 2020 IPL in UAE.

But the off spinner was disappointing on a helpful wicket in Chennai. He was India's most expensive bowler on Day 1 letting the England batsman away. He bowled on both sides of the wicket and conceded a number of boundaries. There were no periods of pressure built as was expected by the fifth bowler of the XI. Sundar cannot play, at least at home as a batsman who can bowl. It has to be the other way around. India's fifth bowler cannot be bowling just one over on an abrasive and crumbing Chepauk wicket in the second innings. There is something wrong there.

Kuldeep Yadav will be an attacking option for India. He has played 6 Tests and bagged 24 wickets at a very good strike rate of 41.2. Although he has not been at his best in the last couple of years, Kuldeep has the potential to run through the batting line-up of any opposition team on his day. Being a left-arm wrist spinner, he belongs to a rare club and is not easy to pick with his action. England did play Nadeem with confidence and but historically do not have a great record against quality left-arm slow bowlers.

Kuldeep may go for a few runs but he can fetch India wickets. He has a tally of 121 wickets in 32 first-class matches at a very impressive strike rate of 49.9.

India want to play a left-arm orthodox bowler who can leave the ball away from the English right-handers. Axar gives them that option and a better one than Nadeem. His batting abilities also allow them to play the attacking option in Kuldeep Yadav.

Mohammed Siraj may have to sit out in the second Test too. He has done nothing wrong but he cannot play above Ishant Sharma or Jasprit Bumrah in the XI. Siraj was very impressive in Australia where in the absence of senior fast bowlers he returned as the highest wicket taker for India in the series. He might get a look in the next Test though - the Day and Night fixture at Ahmedabad.