Home » Cricket Home » News » India vs England 2021: Chennai and Ahmedabad Another Giant Step in The Evolution Of Rohit Sharma The Batsman
6-MIN READ

Rohit Sharma's 161 on a spinner friendly track in Chennai and 66 on an even more difficult wicket at Motera have been the difference in the batting between the two teams in the ongoing series. His match-winning knocks have been as defining as the heaps of wickets taken by the Indian spinners in the series.

While R Ashwin and Axar Patel deserve all the credit for bamboozling the England batsmen with their guile and spin there is another hero for India in the series who has stood out with his performances and raised his game when most others around him have failed. Rohit Sharma’s 161 on a spinner friendly track in Chennai and 66 on an even more difficult wicket at Motera have been the difference in the batting between the two teams. His match-winning knocks have been as defining as the heaps of wickets taken by the Indian spinners in the series.

India were 0-1 down in the four-Test series and for the first time in many years were threatened at home by a visiting team. Rohit Sharma produced a sensational 161 off just 231 deliveries even as the top order crumbled around him – Pujara, Kohli and Gill all were dismissed before India reached three-digits. Rohit’s innings included 18 fours and 2 sixes and he had scored almost 65% of his team’s runs at the time of his dismissal. Overall Rohit scored 48.94% of India’s first innings total of 329 and was the difference between the two sides on a wicket aiding spinners from Day 1. Clarity of thought, solid in defence, positive intent and clean striking were the hallmarks of his majestic hundred.

Rohit’s 66 off 96 deliveries in the first innings at Motera were worth their weight in gold. On a wicket where most batsmen perished and found it difficult to put bat to ball, Rohit produced a masterclass again choosing attack as his first form of defence. He understood that it was impossible to survive only defending and mixed caution with aggression. Rohit scored 57% of India’s total of 115 when he was dismissed. Even as the top and middle order succumbed around him, not only did he devise a way to stay at the crease but also scored invaluable runs at a high strike rate.

What was remarkable about Rohit’s performances in Chennai and Ahmedabad was the control with which he batted in both the innings. Despite counter-attacking the bowling on turning tracks his False Shot Percentage was just 14%. These two innings were proof of the evolution of Rohit Sharma – the batsman who has added yet another cap in his illustrious international career.
2007-2012: Rohit – The Middle-Order Limited Overs Batsman With Average Returns

Rohit Sharma made his international debut in an ODI match against Ireland in Belfast in June 2007. During the next five and a half years he mainly floated in the Indian middle order batting from positions 3 to 7. He also opened on three occasions in South Africa in 2011 but failed. Rohit, the middle-order batsman had a moderate return in ODI cricket in this time-frame scoring 1949 runs in 78 innings at an average of 31.43 and strike rate of 78.62. He registered two hundreds – in successive matches in Bulawayo against Zimbabwe and Sri Lanka, both from number 4 in 2010.

The story was similar in T20I cricket. Rohit was primarily a middle-order batsman who mainly batted in the positions 4-6 in this time frame. He had an average of 28.57 and strike rate of 129.44 with 4 fifties from the middle-order in this period.

2013: Rohit – The Great ODI Batsman is Born But Inconsistent Returns in Test Cricket

Rohit Sharma consistently started opening for India since 2013. He blasted an unbeaten 141 off just 123 deliveries as India chased down Australia’s total of 359 in Jaipur in October, 2013. What had already been a good year for Rohit the ODI opener – now became a great one! This innings completely transformed Rohit and since then he has surpassed unimaginable heights in the format. He is the only batsman to record three double hundreds in ODI cricket history and has amassed 7119 runs in 135 innings at a stunning average of 59.32 and strike rate of 92.59 opening the innings for India in this time-frame.

27 of his 29 hundreds in the format have come opening the innings post 2013. He has an average of above 50 and strike rate of above 90 in 6 of the 8 years since 2013. Rohit is widely regarded as one of the greatest opening batsmen if not the greatest of all-time! He took his ODI batting to the highest levels in the 2019 World Cup where he was the highest scorer of the tournament aggregating 648 runs in 9 innings at a strike rate of 98.33 including 5 hundreds.

Rohit took a little more time to replicate his ODI form in T20I cricket but since 2016 has been one of the most sought after openers in the shortest format too. He has an aggregate of 1846 runs in 61 T20I innings at an average of 31.82 and strike rate of 144.33 since 2016. Three of his four hundreds (which are the maximum in the history of T20I cricket) in the format have come during this period.

But success in ODIs and T20Is did not translate into success in the prime format of the game for Rohit. Despite a dream debut and a Player of the Match performance against the West Indies at the Eden Gardens in Kolkata in November, 2013 where batting at number 6 he hammered a brilliant 177 off just 301 deliveries under pressure helping India to victory by an innings, Rohit’s career did not take off from the middle order in Test cricket. He had a poor 2014 and 2015, gave a good account of himself in the limited opportunities he got in 2016 and 2017 but again failed in 2018 averaging just 26.28 and registering only one fifty in 8 innings. Rohit was inconsistent and in and out of the Test set up and time was running out for him. 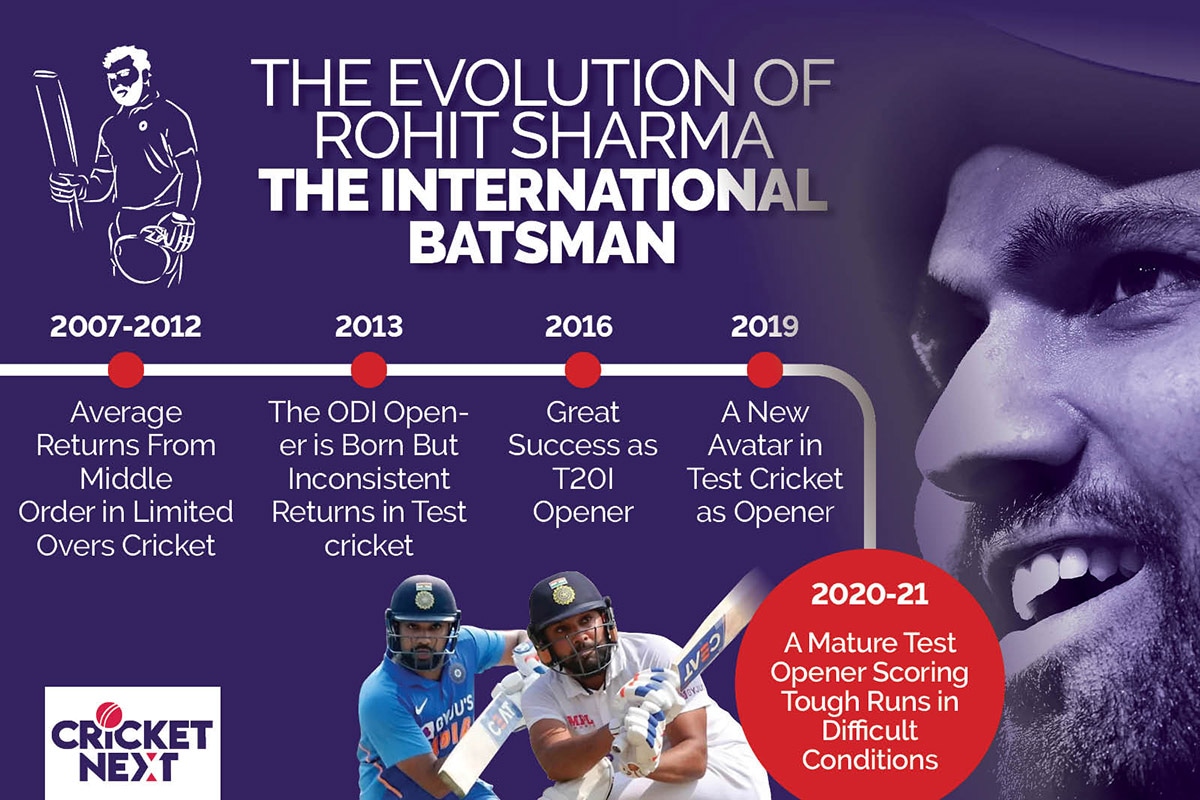 2019 was a great year for Rohit. Not only did he reach new heights in ODI cricket with his scintillating performance in the World Cup but a new avatar of him was born in Test cricket. Rohit, for the very first time in the format, played in the role of an opener. It was his last chance in Test cricket and he had to make it count. Rohit scored a magnificent 176 on his debut innings as Test opener for India against South Africa in Visakhapatnam. He followed that with another hundred in the second innings. He then smashed 212 off 255 deliveries in Ranchi. India found a new hero at the top of the order.

Rohit found new purpose, a new position and a new dimension to his batting. He was doing what the great Virender Sehwag did for India in the 2000s – score big runs at the top of the order at a very high strike rate thereby not only demoralizing the opposition bowlers but also creating enough time for the Indian bowlers to bowl out the opposition twice.

Despite a phenomenal 2019 as Test opener in India there were still concerns of Rohit – the Test opener overseas. He produced two significant performances in tough conditions against one of the best bowling attacks in the world in their own backyard in Australia – Rohit scored 52 in Sydney and followed that with a 44 in Brisbane.

He then produced one of the most brilliant hundreds by an Indian opener at home when he smashed that 161 in the second Test against England in Chennai. When most others failed, Rohit scored tough runs being smart and being aggressive. His 66 at Motera was as good as any hundred and was the difference between the two sides in the match. This was another tick mark in the evolution of Rohit Sharma – the Test batsman. He was showing maturity and adjusting himself to the situation and match conditions and producing the goods against all odds. Not surprisingly he has moved to a career best Number 8 in the latest ICC Test Rankings.
From an average limited overs batsman and poor and inconsistent returns in Test cricket from the middle order to one of the greatest openers in ODI and T20I cricket history and now a force to be reckoned with as a dynamic, matured and aggressive Test opener – it has been some evolution for Rohit Sharma in international cricket!