India vs England, 2nd T20I at Guwahati Highlights: As it Happened

Catch all the live updates from the second T20I between India Women and England Women. 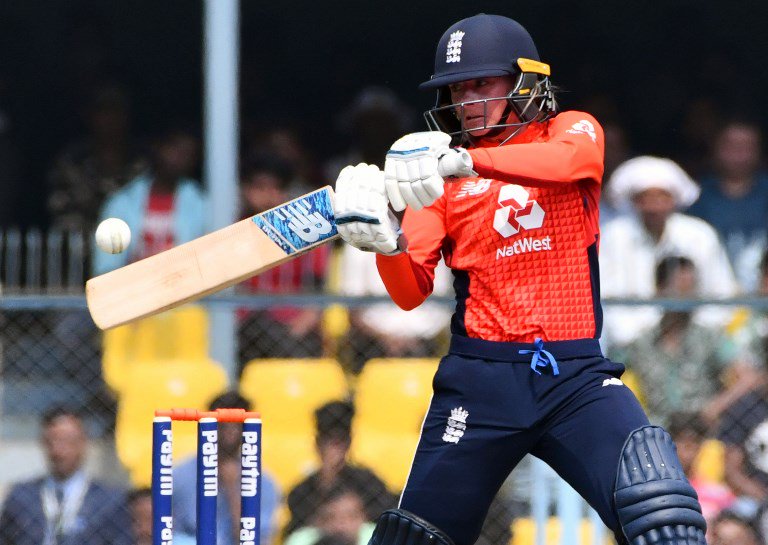 Danni Wyatt is the player of the match for her unbeaten 64 off 55 deliveries.#INDvENG

England wins the 2nd T20I by 5-wickets and 5 balls to spare as Wyatt dispatches Sharma's wide delivery off to the fine leg boundary.

The visitors have wrapped up the series 2-0 with a game to spare.

ENGLAND WIN: An easy win for the visitors in the end, as they take a 2-0 lead in the series. And Danielle Wyatt ends unbeaten on 64.

OUT: And just when it was getting all too easy for England, Deepti has removed Winfield. The batsman tries to clear the midwicket boundary, but is caught by Rodrigues for 29. England are 103/5.

Fifty for Danni Wyatt! She's held firm through a top-order wobble and has kept England on course for the win in the second T20I.

They need 24 runs from the last five overs, with six wickets in hand.

Winfield with another two boundaries in Radhav Yadav's over has taken the match away from India. England now move to 88/4 in 15 overs.

Shikha Pandey comes back into the attack. And the Indian veteran has managed to create pressure on Winfield and Wyatt. She gives away 77/4.

FOUR, FOUR: Winfield and Wyatt have released the pressure by hitting two fours in Poonam Yadav's over. This match is still not over but. Indian bowlers are putting up a strong fight. It's 69/4 after 12 overs.

OUT: England are in deep trouble as spinners are making hay at the moment. Ekta Bisht has another wicket as Heather Knight departs for 2. England are now 56/4.

OUT: Here is another wicket for India as Bisht gets Sciver for 1, She traps the batsman right in front of the stumps. This is good bowling by the Indians as England are 51/3.

OUT: Poonam Yadav has produced a wicket here. The bowler tosses the ball up and Jones plays it straight into the hands of the bowler. She departs for 5 as  England are 45/2.

Radha Yadav continues. England still look comfortable but one thing is for sure that the run rate has come down a lot. England are 43/1.

OUT: And Radha Yadav strikes. She has shown why she is rated so highly by everyone. She tosses the ball up and Beaumont misses the line of the ball completely and is castled for 8. England are 28/1.

We already have a change in the bowling as Deppti Sharma comes into the attack and bowls a good over. Just three runs come from her over as England are 26/0 in 4 overs.

Pandey starts another over for India but England are dealing boundaries at the moment. This is far too easy at the moment for the opposition. And Wyatt follows it up with another boundary. This is exceptional stuff. England are 23/0 after 3 overs.

And on to the second innings. Can India defend this paltry total. Shikha Pandey starts the proceedings and gives away 4 runs. It's 4/0.

OUT: Not a great start to the final over as Brunt removes Fulmali to get her third wicket of the day. And the final over goes without a boundary. India finish on 111/8.

India finally gets going as 10 runs come from the over as Fulmali gets a four. Another four runs come as byes. India at least needs 120 to make a match out of this one. It;s 105/7.

OUT: Ordinary batting performance by the Indians continues. This time Taniya Bhatia gives a simple catch to Heather Knight. India are 95/7.

OUT: Smith gets yet another wicket and this time it's Shikha Pandey who has to go. India are languishing are 91/6 at the moment.

Strong performance in the field! 💪

OUT: Another wicket perishes as Mithali tries to loft the ball in the air and ends up giving a simple catch to 20. India are 84/5.

FOUR: New batsman Fulmali gets a four too. That should help India a bit, but on the other end Mithali is still struggling. India now move to 78/4 after 13 overs.

OUT: Lot of confusion out there in the between Mithali and Deepti. The latter hits the ball straight back to the stumps and calls for a quick single. But Mithali refuses and Deepti is caught out of her crease. India are 69/4.

FOUR: A boundary coming after a long time for India as Smith strays in line and Deepti sweeps the ball for a four. A welcome boundary for the Indians. After 11 overs it's 62/3.

India are struggling at the moment. Mithali and Deepti are struggling to get the boundaries and single are hard to come by. This has been the story for India in T20Is. After 9 overs it's 50/3.

OUT: Linsey Smith has a wicket here. The off spinner drops the ball short and Deol gives a simple catch. Deol departs for 14 as India are 34/3.

OUT: After Mandhana's departure the run rate has come down substantially. But Deol gets a four through point. But once again when a partnership was starting to build, Rodrigues is castled by Brunt. India are 34/2 in 5 overs.

India Women vs England Women Live Score, Latest Update: ENGLAND WIN: An easy win for the visitors in the end, as they take a 2-0 lead in the series. And Danielle Wyatt ends unbeaten on 64.

Catch all the live updates from the second T20I between India Women and England Women.

Preview: Having lost the first game of the three-match T20I series against England by 41 runs, the Indian women will look to level the series in the second match in Guwahati on Thursday (March 7). The Smriti Mandhana-led side know that a loss will consign them to a second consecutive T20I series defeat since the Women’s World T20 held in late 2018. After the tournament, in which India lost the semi-final to England, they were on the wrong end of a 3-0 scoreline in a T20I series in New Zealand despite finding themselves in winning situations in all matches.

But in order to have any chance of levelling the series, the hosts will have to put together a better all-round performance than they did in the previous match. Stand-in skipper Mandhana had said after the last game that they gave away a few extra runs, something that was evident in the way most batsmen went for big shots in the second innings but ended up losing their wicket instead. The top four batsmen contributed a combined 19 runs, in stark contrast to England’s top order which made 142 of their 160 runs in the first innings. India are without regular skipper Harmanpreet Kaur for the series, meaning there is more pressure on Mandhana as well as Mithali Raj, who is expected to anchor the middle order.

Raj’s long-term T20 career might be under the scanner but she showed in the New Zealand series that she can still bring value to the side, even if not playing as an opener. However, neither Mandhana nor Raj came to the party in the previous game. Debutant Harleen Deol failed to impress, as did Jemimah Rodrigues and Veda Krishnamurthy. To make matters worse the bowling department also had a mixed showing, meaning Mandhana’s bow as T20I captain was a day to forget. For England, the aim will be to do more of the same. Their batting unit fired well in the first game and the bowling department also had a decent showing, meaning they will look to keep up the form as they bid to seal a series win against a young and under-pressure India side.