Hardik Pandya is a top class fielder and therefore when he drops a catch it becomes news. In a shocker of an incident, he dropped a sitter of Ben Stokes of Bhuvneshwar Kumar. 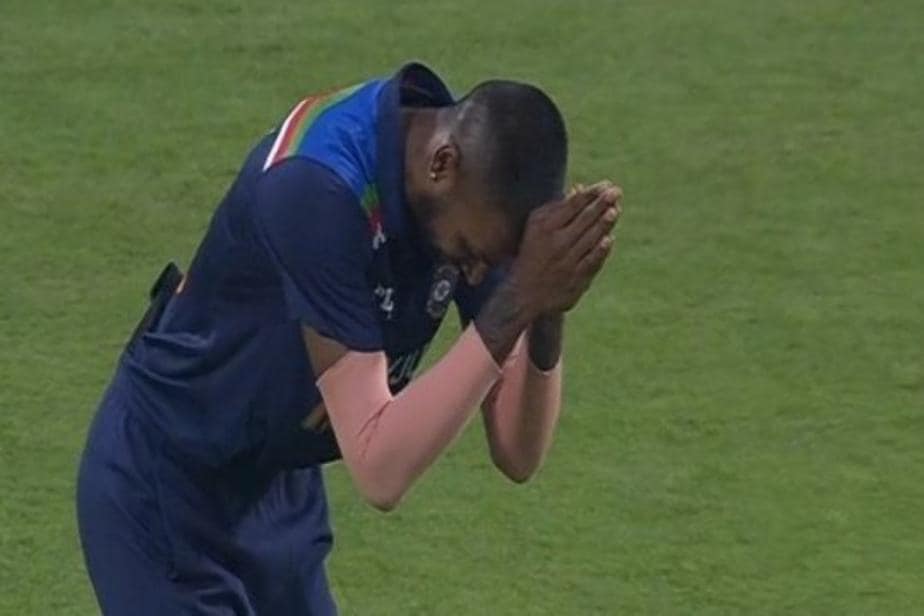 Hardik Pandya is a top class fielder and therefore when he drops a catch it becomes news. In a shocker of an incident, he dropped a sitter of Ben Stokes of Bhuvneshwar Kumar. Considering the fact that the all-rounder was playing for just five at the time, it was something that Team India couldn’t afford to do.

However, Stokes was finally dismissed for 35 runs and Pandya was so relived that he bowed down to fielder who took his catch–Shikhar Dhawan. Earlier

Rishabh Pant and Hardik Pandya hit stroke-filled half-centuries but Indian lower-order caved in meekly to settle for a below-par 329 against England in the third and final ODI here on Sunday. Pant’s sparkling knock of 78 off 62 balls was well supported by Hardik (64 off 44 balls) but India lost their last four wickets for a mere eight runs to finish at least 30 runs short on another batting belter.

Pant, during his career-best knock plundered four maximums and five boundaries, while Hardik had five fours and four sixes during their 99-run stand for the fifth wicket. However Krunal Pandya’s (25 off 34 balls) serious limitations while facing express pace was exposed by Mark Wood (3/34) as India lost the momentum during the final 10 overs despite brilliant 103 run opening stand inside 15 overs between Rohit Sharma (37; 6×4) and Shikhar Dhawan (67 off 56; 10×4).

The senior Pandya at times was finding it difficult to bring his bat down in time while facing the pace of Woods and didn’t get a single boundary consuming nearly six overs of the innings. It was a day when India’s top order was troubled by English spinners with Adil Rashid’s (2/81 in 10 overs) googlies in successive overs removing Rohit and Dhawan.