Back to News18
Home » Cricket Home » News » India vs England - From India's Maiden Win in 1961 to England's Stunning Victory in 2012: A Historical Perspective

England will embark on one of the most highly anticipated tours to India in the last few years. Holders of the 2019 World Cup and with four successive Test series wins under their belt, this England team is different from the several others which have toured India England will embark on one of the most highly anticipated tours to India in the last few years. Holders of the 2019 World Cup and with four successive Test series wins under their belt, this England team is different from the several others which have toured India in the past especially post 1990. With a bunch of world class players they are capable of causing an upset in what will be a hugely significant series keeping in mind the World Test Championship Final at Lord's in June.

We look back at some of the moments which stand out from the past. The infamous Douglas Jardine who initiated Bodyline led England in their first tour to India in 1933. It was the first series for India, still under British Rule with the independence movement at its peak. C.K. Nayudu was the captain of the home team. Lala Amarnath got a hundred in Mumbai but England went on to win the Test by 9 wickets. The second Test at the Eden Gardens ended in a draw while the visitors thrashed India by a massive 202 runs in the third and final Test in Chennai. Right arm fast, Amar Singh's 7-86 was the standout performance for India from the match.

It was the fifth and final Test in Chennai with India 0-1 down in the series. Vinoo Mankad picked 8 wickets in the first innings to dismiss England for 266. Pankaj Roy (111) and Polly Umrigar (130) hit centuries to give India a massive first innings' lead which turned out to be decisive in an innings win for the hosts - their first Test match win against any opposition.

The first three Tests ended in a draw. India beat England by 187 in Kolkata with Mansur Ali Khan Pataudi and Chandu Borde leading the show with the bat and Salim Durani putting in the best performance with the ball. Skipper, Nari Contractor (86) and Tiger Pataudi (103) helped the home team to a big score in the first innings in Chennai. Durani again returned with 6 to give India a big lead. Vijay Manjrekar produced a masterclass 85 in the second innings (out of a total of 190). England, set 338, were dismissed for 209.

India had won a famous Test series 2-0 - their first against their erstwhile colonial masters! 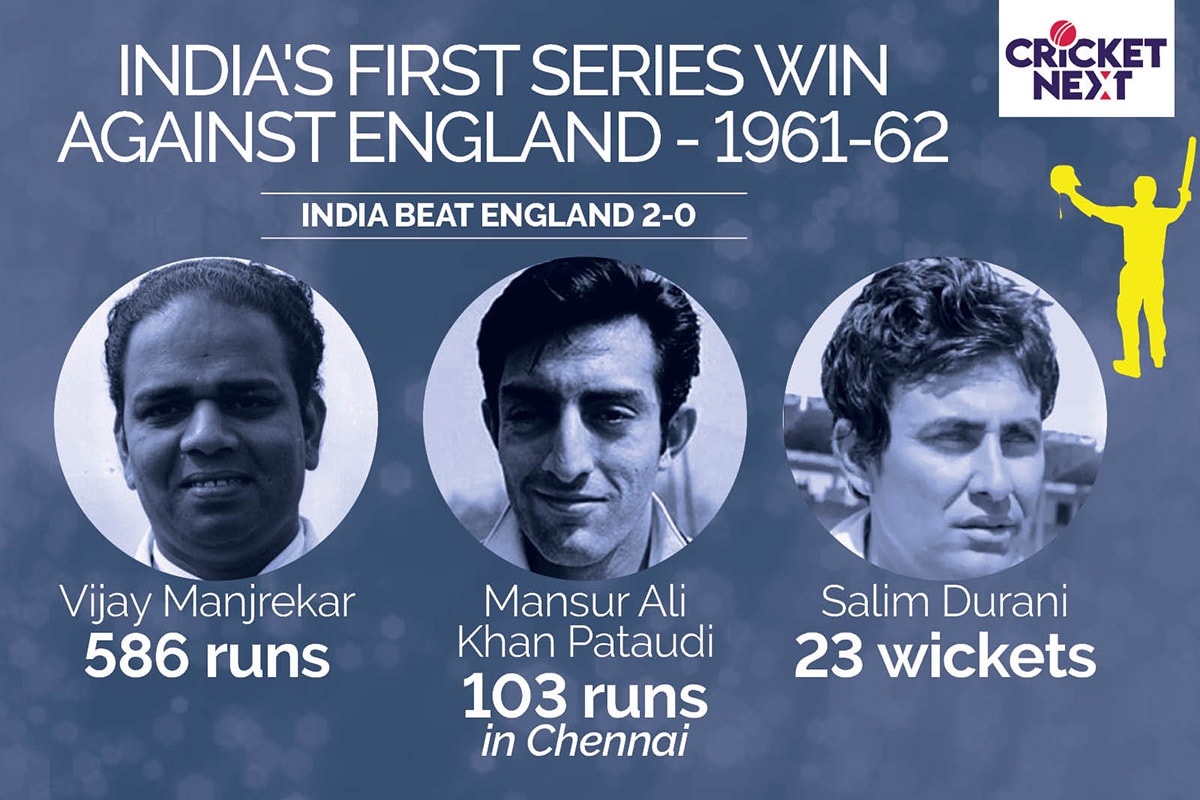 India vs England: 'Root Should Bat Like Cook, Stokes and Buttler Should do a Pietersen' - Andy Flower

Fine performances by Geoff Arnold, skipper Tony Lewis and Tony Greig helped England to a six-wicket win in the series opener in Delhi. Bhagwath Chandrasekhar picked 9 wickets in the match as India levelled the series at the Eden Gardens. India's spin trio of Chandra, Bishan Singh Bedi and Erapalli Prasanna then combined and along with an impressive 73 from Tiger Pataudi took India to a 2-1 lead in the series. The fourth and fifth Tests ended in draws. India won the series 2-1.

Chandrasekhar picked 35 wickets in the series at an average of 18.91 - which remains the maximum for an Indian bowler against any opposition at home in a series. England beat India in 1976 and 1984. India won in 1981. Dennis Amiss piled on more than 400 runs while Derek Underwood (29 wickets), John Lever (26 wickets) and Bob Willis (20 wickets) were the standout performers for England in 1976. The 1984 triumph was led by Mike Gatting who aggregated 575 runs in the five-match series. Mohammad Azharuddin scored three hundreds in the series and was the highest scorer for India.

A year and a half before the world bowled down to Ian Botham, he gave a glimpse of his all-round genius in Mumbai. In the only Test in 1980 to celebrate the Golden Jubilee of the BCCI, England were reeling at 57 for 4 when Botham walked out to bat. What followed was a brilliant counter-attacking hundred against Kapil Dev and his men. Botham hammered 114 off just 144 deliveries - an innings which included 17 fours - and powered England past the Indian total of 242. India collapsed in the second innings as the great Botham produced one of the finest all-round performances also returning with 13 wickets in the match. England went on to win by 10 wickets. India registered their first and only series sweep against England in 1993 - the victory including two innings wins in Chennai and Mumbai. Vinod Kambli was the highest scorer of the series with 317 runs while England's Graeme Hick closely on number two just a couple of runs behind. But the real heroes for India were the spin duo of Anil Kumble (21 wickets) and Venkatapathy Raju (16 wickets) who were well supported by Rajesh Chauhan.

The series marked the domination of India at home in the 1990s - they did not lose a single Test series in their own backyard in the entire decade. It remains one of the most dominant performances by any team at home in an entire decade in Test cricket history!

Anil Kumble and Harbhajan Singh picked heaped of wickets with the ball while Deep Dasgupta recorded his only Test hundred in the only result match of the three-Test series in Mohali in 2001. India won by 10 wickets.

Virender Sehwag's brilliant 83 off just 68 deliveries coupled with an unbeaten hundred from Sachin Tendulkar and fifties from Gautam Gambhir and Yuvraj Singh helped India chase down a record 387 in the series opener in Chennai in 2008. It is one of the three 300-plus chases in India's Test cricket history! The second Test in Mohali ended in a draw as India took the series 1-0.

India were 1-0 up in the series and courtesy a Cheteshwar Pujara hundred had scored 327 in the first innings in Mumbai. England were given a solid start by Alastair Cook and Nick Compton. Pietersen joined Cook at the crease and immediately took control.

The partnership continued to blossom on Day 3 with Pietersen recording a splendid hundred off just 127 deliveries including 15 boundaries. The 206-run stand finally ended when Cook was dismissed for 122 by Ashwin. Peitersen continued to plunder with the middle order and smashed a magnificent 186 off just 233 deliveries including 20 fours and 4 sixes. Seldom had a visiting batsman dominated a top-class Indian spin attack in India in the manner in which Pietersen did in Mumbai in the innings. Again a bowling line-up comprising Ashwin, Ojha, Harbhajan Singh and Zaheer Khan, it was the Englishman who had come out on top hitting the bowlers out of the attack making a mockery of all of India's strategy and plans. Pietersen's innings is widely recognized as the greatest knock by an overseas batsman in India.

Eden Gardens was playing host to the series decider. India posted 316 in the first innings. Cook put together 165 for the opening wicket with Nick Compton before stitching another match-changing partnership of 173 with Jonathan Trott for the second wicket.

He was the third English wicket to fall after scoring 190. The visitors went on to post in excess of 500 and then bowled out India for 247. They went on to register a famous seven wicket victory. The fourth Test in Nagpur ended in a draw. England took the series 2-1 - their first triumph in India since 1984. It was a rare home series loss for India - only their third since the 1st of January 2000 (South Africa - 2000 and Australia - 2004).

Cook amassed 562 runs in the series with three hundreds in 4 Tests while Graeme Swann was the highest wicket-taker with 20 wickets for England. 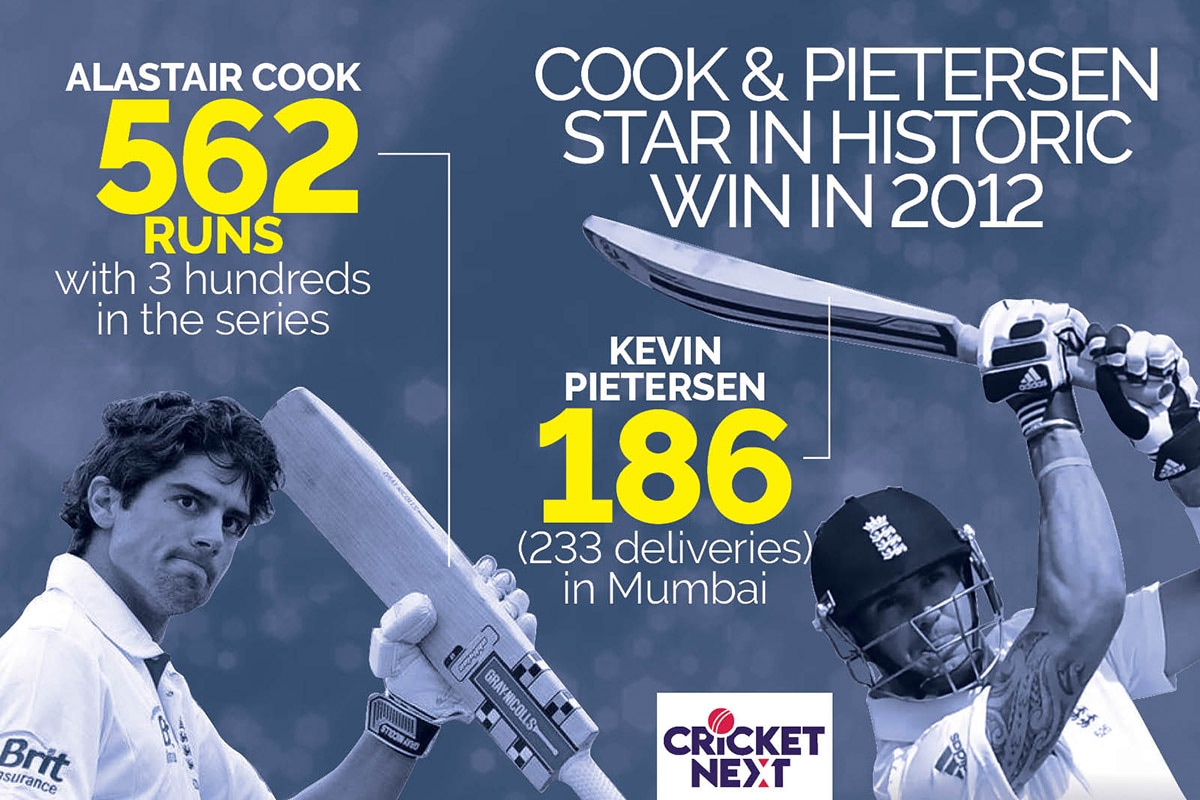 India thrashed England 4-0 in the five-Test series in 2016. Virat Kohli and Cheteshwar Pujara smashed hundreds in Visakhapatnam, Ravindra Jadeja and R Ashwin combined with the bat and ball to give the hosts an eight-wicket win in Mohali while India recorded innings wins in Mumbai and Chennai. Kohli smashed a double hundred in Mumbai while Karun Nair registered a triple century in Chennai.

Kohli's aggregate of 655 runs in the series remains the second-highest in a home series for India (after Sunil Gavaskar's 732 against the West Indies in 1978). Joe Root with 491 runs was the highest scorer for England. Ashwin and Jadeja collectively picked 54 wickets in the series. It was one of England's worst performances in India.