IND vs ENG Chennai Test: England 53-3: STUMPS. India's day. England need to climb a mountain over the next two days, and it's almost impossible. Expect the game to be over by the first two sessions tomorrow. Ashwin's century the highlight of a superb day for India. Axar then got two wickets, while Ashwin got one as England have lost 3 already. Can they get a special knock from Root or Stokes? Or will it be Ashwin and Axar tomorrow?

IND vs ENG Chennai Test: England 52-3: REVIEW - Lbw appeal against Root from Axar. Not given out. India review, but impact is just outside off. Not out.

IND vs ENG Chennai Test: England 50-3: WICKET - Jack Leach gone c leg slip b Axar Patel. Nightwatchman goes early. Spins in from the rough, gets the inside edge and an easy catch at leg slip.

IND vs ENG Chennai Test: England 49-2: WICKET - Burns c Kohli b Ashwin. The second wicket falls. Looks to play to the leg side and gets an edge to second slip. Kohli gobbles it up, and England in trouble.

IND vs ENG Chennai Test: England 33-1: Lawrence on the attack - skips down the track and whips Axar Patel for a couple of boundaries. Attack the best form of defence here.

A moment to cherish forever! @ashwinravi99 gets his Test💯 in Chennai and Md. Siraj erupts in joy. The dressing room stands up to applaud.🙌🏾 #TeamIndia #INDvENG @paytm pic.twitter.com/ykrBhsiTbl

IND vs ENG Chennai Test: England 6-0 in 1 over: Rory Burns starts with a first ball boundary vs Ishant Sharma. Some confidence to get going. Long way away still.

Well played, Ravi Ashwin - A knock to remember for a lifetime - 106 runs from 148 balls including 14 fours and 1 sixes - This is the same pitch which England bundled out for 134 runs on Day 2 which make this knock remarkable. pic.twitter.com/tTtgIo0Z2u

IND vs ENG Chennai Test: WICKET - Ashwin is bowled looking to slog Stone, and that's the end of the innings. Target for England: 482. Huge. Safe to say impossible? A terrific knock from Ashwin that. A dream game. Five wickets followed by a century in tough conditions. Can he wrap it up with another special performance with the ball?

Say what about the pitch?

Chepauk applauds you, the country applauds you 👏 Ashwin, what an all round performance! @ashwinravi99

Bad pitch? Not at all.

When the whole whole world talks about it being a bad wicket,@ashwinravi99 gets a 100 batting at 7. I hope this lessens the doubts in all the pundits head. A certain game plan and implicit trust in defence gives you a great chance of doing well in this Chennai wicket #legend

IND vs ENG Chennai Test: CENTURY FOR ASHWIN! At home his turf Chepauk. What a moment. Smashes Moeen over mid wicket for a six. Then takes a double, and then slogs again to get an edge to third man for the milestone. He's elated. The Indian camp and the entire crowd on their feet. What a knock. What a moment for Ashwin. India stretching their lead.

IND vs ENG Chennai Test: Ravi Ashwin is eyeing a century and what a treat would that be for the Chepauk crowd if their own guy gets a century and that's why every block from number eleven Mohammed Siraj is being cheered.

Mohammed Siraj is the last man in.

IND vs ENG Chennai Test: OUT! CAUGHT! Leach gets his fourth and the bowling change has worked for England. Flighted delivery on off, Ishant looks to go for a big hoick with a slog sweep. He does not connect it as it comes off the upper half of his bat. Stone at square leg, runs to his left and slides to take a very good catch.

India vs England, 2nd Test FOUR! Ishant is taking on the bowlers as well now. Flighted on off, Ishant comes down the track and lifts it over cow corner for a boundary. 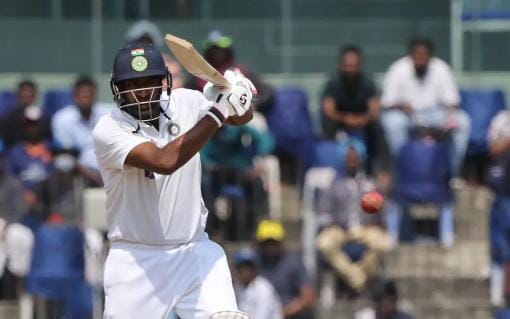 India vs England, Live Cricket Score, 2nd Test Day 2 Live Updates IND vs ENG Chennai Test: England 53-3: STUMPS. India's day. England need to climb a mountain over the next two days, and it's almost impossible. Expect the game to be over by the first two sessions tomorrow. Ashwin's century the highlight of a superb day for India. Axar then got two wickets, while Ashwin got one as England have lost 3 already. Can they get a special knock from Root or Stokes? Or will it be Ashwin and Axar tomorrow?

India vs England, 2nd Test FOUR! Ishant is taking on the bowlers as well now. Flighted on off, Ishant comes down the track and lifts it over cow corner for a boundary.

IND vs ENG Live score: IND 237/8 - FOUR! The ploy looks clear, Ashwin is trying to get to his century as quickly as possible and then India might declare. Fuller around off, Ashwin goes over mid off and gets a boundary. The local boy moves to 75 with that.

Moeen Ali to Ravichandran Ashwin: Stumping opportunity missed! Foakes, who has been brilliant in this game has missed a stumping. Floated delivery outside off, Ashwin comes down the track and looks to go big but misses. The ball keeps low and kind of wrong-foots Foakes. He is unable to get down and collect the ball. There is a noise and Ultra Edge later shows that there was a little spike as the ball went past the bottom edge of the bat. A tough chance but from what we have seen from Foakes in this Test, he will be gutted to have missed that.

IND 221/8: TEA-65 runs coming off this session and it saw two wickets. A 96-run stand between Virat Kohli and Ravi Ashwin for the seventh wicket and now India has a lead of 416. This is looking more and more like India's game from here.

Pitch report - Mark Butcher from the studio says that the wicket is crumbling more. Feels things will get even better for the spinners. Adds that the England spinners will have to look at how the Indian spinners have exploited the surface to their effect. Tells that they need to bowl a tad fuller on this wicket.

India are leading by 249 at the moment and they have 9 wickets in the kitty. Rohit Sharma is looking in solid touch and he has got Pujara for company. You know how Rohit can hit and you know how long Pujara can bat. England bowlers or we shall say the England spinners will look to use the surface to their advantage and strike early to keep the scoring rate under check as well.  So, we are in for another scintillating day of Test match cricket.

So far, the script has played out perfectly for India, who won the all important toss on the opening day and put up a decent enough total on a dust-bowl in their bid to level the series. India, who had taken four wickets in the morning, claimed another four in the post-lunch session to leave England gasping at 106 for eight at tea.

Day 2 report: The demons were out on Day 2 of the second Test between India and England in Chennai. After just six wickets fell on the opening day, as many as 15 wickets were lost today on a pitch playing all sorts of tricks at the MA Chidambaram Stadium in Chennai. The day belonged to the Indian spin duo of R Ashwin and Axar Patel. While the champion off spinner returned with yet another fifer at home, Axar, on debut was a brilliant support act and picked two huge wickets including the one of Joe Root. England were bowled out for 134 in just under 60 overs handing the home team a massive 195-run first innings lead. India had moved to 54 for 1 at stumps which meant they had an overall lead of 249. The first hour on Day 2 belonged to England who picked the last four Indian wickets to fall for just 29 more runs in the day. While Rishabh Pant again impressed with the bat with a fine unbeaten 58 off 77 deliveries - a knock that included 7 fours and 3 sixes - the lower-order crumbled without any contribution. Moeen Ali was expensive going at above 4 runs per over but returned with 4 wickets. Olly Stone was the most impressive fast bowler for the visitors and bagged three wickets.

England had a terrible start as Ishant Sharma trapped Rory Burns leg before wicket in the very first over of the innings. From then on it was the Ashwin and Axar show. With the wicket offering sharp turn and bounce and exploding with puffs of dust very often, the Indian spin duo were all over the England batsmen who looked all at sea against them. Ashwin got the big wicket of Dom Sibley who has been magnificent in his last few innings in Asia - the opener becoming the first batsman in the innings to fall to the sweep. Axar Patel started brilliantly on his Test debut - his first ball induced the edge of Root's bat while the second one just missed the outside edge. He was getting fast turn. Root's favourite shot for once deserted him - he was out caught at short-fine leg trying to sweep Axar but the extra turn and bounce did him in. England were in tatters at 23 for 3 in the 11th over. Axar had struck a massive blow in just his second over. Ashwin and Axar continued to build pressure till Lunch and in the second session too. Dan Lawrence's uncomfortable stay in the middle ended when Ashwin sent him packing for 9 and soon after Ben Stokes was castled by a peach of a delivery by the off spinner - drifting in and moving away to hit the off stump.

Mohammed Siraj continued to impress and struck off his first ball of the day as Rishabh Pant took an excellent diving catch to his left. Axar dismissed Moeen Ali while Ashwin picked two more to take his 29th fifer in Test cricket. During the course of his five-wicket haul, he also went past Harbhajan Singh to become the second-highest wicket-taker in India after Anil Kumble and also achieved the feat of dismissing 200 left-handed batsmen! England were routed for 134 in just under 60 overs giving India a massive 195-run lead in the first innings. The home team lost Shubman Gill but with no further damage ended the day at 54 for 1 with an overall lead of 249. India are in the driver's seat and with the wicket offering sharp and fast turn, especially with the new ball, India already have enough on the board. Apart from Ashwin and Axar with the ball, Pant was brilliant behind the stumps taking two diving catches. In light of England's poor performance with the bat, Rohit Sharma's brilliant 161 on Day 1 assumes even greater significance. He scored 27 more than the whole England team put together. India should wrap up this match and level the series by end of Day 3 or in the first half on Day 4.