India vs England live score, ENG 164 ALL OUT: WICKET! Moeen Ali's 17-ball 43 cameo comes to an end and that's curtains as far as England innings is concerned. India win by 317 runs and series now level 1-1.

India vs England live score, ENG 126-9: WICKET! Another one bites the dust and Axar Patel gets five-for on debut. India on the brink of a series-levelling win at Chepauk.

India vs England live score, ENG 116-8: WICKET! Yes, Joe Root departs. Unplayable delivery. Root was looking to go for the front-foot defence but the ball just took off and Rahane did the rest at slips. Mohammed Siraj can smile now, he had dropped England captain earlier.

India vs England live score, ENG 116-7: Kuldeep Yadav has resumed proceedings after Lunch for India and the question everyone needs to ask is: Will India win the game in this session itself?

India vs England live score, ENG 116-7: OUT! Kuldeep Yadav gets Ben Foakes to lob one to Axar and England are seven down. Lunch is taken on that note and India are already in a celebratory mood. Three wickets stand between them and a series-leveling win.

India vs England live score, ENG 110-6: OUT! Ollie Pope goes for a slog sweep but only top edges it and Ishant Sharma takes the catch in the deep. Axar Patel gets his first wicket of the day. Just four more wickets needed now.

India vs England live score, ENG 90-5: OUT! Ashwin strikes again and Ben Stokes has to depart. He gets one to turn inside to the left-hander, who inside edges it on to the pad and gives a simple catch to Kohli close in. The visitors have now lost half their side.

India vs England live score, ENG 88-4: It is time for drinks now and India will be pleased with how the first session of the day has gone thus far. There's plenty of time to get all the wickets but they will want to break this partnership soon.

India vs England live score, ENG 82-4: Ben Stokes is the new man in and he and Root have quite the task in hand. England will hope they can bat on for a while but Ashwin is looking ominous on a track that is offering plenty of help.

Here's an update on Shubman Gill

UPDATE - Shubman Gill sustained a blow on his left forearm while fielding on Day 3 of the 2nd Test. He has been taken for a precautionary scan. The BCCI Medical Team is assessing him. He won't be fielding today.#INDvENG pic.twitter.com/ph0GJsqpFi

India vs England live score, ENG 66-4: OUT! India have the first breakthrough of the day and of course it is Ashwin who provides it - with an assist to Pant. Dan Lawrence charges down the ground but completely misses it, Pant does well to whip the bails off.

Any guesses on what the huddle talk would be today?

India vs England live score, 2nd Test: Sunil Gavaskar talks about the footmarks on the pitch and says that it will help the bowlers but if the batsmen have the skills, they can certainly score runs. Feels that playing both Axar and Ashwin will be very difficult. The master reckons that this match might end between Lunch and Tea.

It was a controversial moment in the dying moments of Day 3 which has refuelled the debate on Umpire's call. India were on the receiving end as Joe Root got a lifeline. The former Australian cricketer, Mark Waugh tweeted and said - 'That’s the plumbest LBW I’ve ever seen given not out by DRS. Problem is the DRS went with the umpire's call for not out for a caught behind not LBW'. There have been big debates regarding that decision on social media and expect it to continue even more if Joe Root gets a big one here. Things will certainly spice up more!

Well, everyone has their own way of keeping themselves occupied

As we wait for live-action to begin, here's what Ashwin had to say about his hundred and the influence batting coach Vikram Rathour had on his batting

A very happy birthday to @mayankcricket. 🎂👏

Can Root lead an English fightback? Or will Ashwin and co. roll over the visitors quickly? We will find that out Today 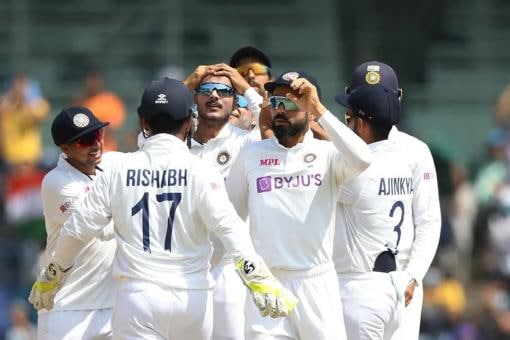 It was a controversial moment in the dying moments of Day 3 which has refuelled the debate on Umpire's call. India were on the receiving end as Joe Root got a lifeline. The former Australian cricketer, Mark Waugh tweeted and said - 'That’s the plumbest LBW I’ve ever seen given not out by DRS. Problem is the DRS went with the umpire's call for not out for a caught behind not LBW'. There have been big debates regarding that decision on social media and expect it to continue even more if Joe Root gets a big one here. Things will certainly spice up more!

IND vs ENG live score: This Test match has moved at a very brisk rate and all the advantage rests with India. It's a matter of when, not if as far as their victory is concerned and let's see how much fight is left in England. Going by the way things panned out in the 19 overs last evening, the signs are ominous. The pitch has settled into a 'spin bowling beauty' and the touring team would need everything, from application to courage to skills to luck to come out of this Test match unscathed. Stay tuned for more...

Can Root lead an English fightback? Or will Ashwin and co. roll over the visitors quickly? We will find that out Today

Hello and welcome to live coverage of Day 4 of the second Test between India and England. The visitors are in a spot of bother and will look to bat their way out of trouble on a pitch that is doing plenty for the spinners.

Day 3 report: If Day 2 belonged to Ashwin - the bowler, Day 3 was dominated by Ashwn - the batsman. England saw their luck change dramatically post the first hour of play with the Indian skipper and his champion off spinner batting the visitors out of the match with a magnificent 96-run partnership for the seventh wicket. India went on to bat for a little over 85 overs on a difficult wicket putting 286 on the board setting England a mammoth 482 for victory. The visitors were struggling at 53 for 3 after 19 overs at stumps with two days to go in the match.The day started with the bizarre run-out of Cheteshwar Pujara who stepped out his crease to play a flick only to find himself dismissed in the most unusual manner with all attempts with the bat and foot to get back to no avail as short-leg Ollie Pope flicked the ball back to the keeper Ben Foakes to complete the formalities. India lost their second wicket of the morning with the score still on 55 when Rohit Sharma was stumped by Foakes - an excellent bit of work behind the wickets to a ripper of a delivery from Jack Leach - the ball dipping and turning and bouncing and bamboozling the Indian opener. Rishabh Pant ws promoted to counter Leach but for once was not able to make an impact - he became the second Indian batsman to be stumped scoring just 8. India were in a spot of bother at 65 for 4.

Moeen Ali then got into the act and got two quick breakthroughs for the visitors - he got Ajinkya Rahane caught at short leg before trapping Axar Patel leg before wicket. Although the lead was in excess of 300, at 106 for 6, India were in tatters in the second innings with a possibility of being bowled for under 120. That would have given England an outside chance in the contest. But King Kohli and Local Hero Ashwin had different plans. The pair put together a brilliant 96 runs for the seventh wicket giving a lesson to one and all on how to bat on a difficult wicket. Ashwin was aggressive to start with while Kohli displayed his technical and defensive prowess batting beautifully against the spinners. Both of them showed to the cricketing world, especially the Western media and former players from England and Australia critical of the pitch, how to bat on a tricky wicket playing proper cricketing shots, using the crease and your feet against the spinners, coming forward and back with confidence and judging the length of the ball to perfection. Kohli started off slowly soaking up the pressure of wickets around him before unleashing his strokeplay. He may not have got a hundred since 2020 but it was as good as innings as any hundred by the Indian skipper - when his team needed it the most with their back to the walls.

Kohli has now produced two excellent fifties in trying conditions in back to back Tests in Chennai. Ashwin made a big statement by recording his fifth Test hundred in front of his own crowd - an innings full of composure, class and authority. He achieved the double of taking a fifer and registering a hundred for the third time in his career. He was finally dismissed for 106 off 148 deliveries ending India's innings at 286. Set a mammoth 482 for a win, Axar Patel trapped Dom Sibley leg before wicket in the 9th over of the innings - a big wicket for India as the right-hander has the ability and temperament to play out time and overs. Dan Lawrence and Rory Burns resurrected the innings and looked to be positive against the Indian spinners. But it was only a matter of time when they would fall victim to the skill of the Indian tweakers on a helpful pitch. Ashwin broke the 32-run stand getting Burns caught at second slip of Kohli. Patel then removed the night-watchman, Jack Leach in the very next over to reduce England to 50 for 3. They ended the day at 53 for 3 still needing 429 runs for a win. India are in the driver's seat and on the verge of a fine comeback series-levelling win. Don't be surprised if they wrap up the match in the first session tomorrow itself.