India beat England by an innings and 25 runs

India vs England, live score, ENG 135-10: So, that will be the end of this four match Test series. Hope you have enjoyed our coverage. Do join us for the T20I Series. Bye for now.

India vs England, live score, ENG 135-10: WICKET! Dan Lawrence's superb fifty comes to an end as he fails to read this one from Ravi Ashwin. India win this game, take series and enter WTC Final.

India vs England, live score, ENG 121-8: REVIEW---But Overturned. India are just a couple of wickets away and the fans are getting impatient. They are on the brink of the World Test Championship final and Leach survives.
Full Scorecard

India vs England, live score, ENG 121-8: REVIEW---But Overturned. India are just a couple of wickets away and the fans are getting impatient. They are on the brink of the World Test Championship final and Leach survives.

Quietly, Dan Lawrence has done his career a lot of good in this game.

Most 5WI in debut Test series

Another stat on Axar Patel who got another fifer.

India vs England, live score, ENG 109-7: WICKET! What an amazing catch from Ajinkya Rahane at slips. The ball turned a bit and kissed Ben Foakes' bat after which Rahane reacted quickly to complete a sharp catch.

India vs England, live score, ENG 104-6: Excellent use of feet from Dan Lawrence. This youngster is a case in point just in case England want to introspect. Lawrence has been really good with his feet, he is not stuck in his crease and is moving out of crease at will.

India have been outstanding in this series! England have some big questions to ask themselves. From team selection to how they have gone about their batting. Rotation system doesn’t work. The ECB have some serious thinking to do. Well played India. 👏👏👍🏆🏆 pic.twitter.com/JfracnSiKI

A quick stat on Axar Patel.

Axar Patel has had a remarkable debut series. There have been 59 instances of an Indian spinner taking 20+ wickets in a Test series - none of them came at a better average than the 10.68 he's managed. And it could still improve. #INDvENG

India vs England, live score, ENG 95-6: Four runs to begin the post Tea session on Day 3. And now the question is not if but when. When would England fold up? They are six down and will one houe be enough for Kohli and co to finish things up?

India vs England live score, ENG 91-6: It is tea and India are well on course to inflict an innings defeat. They just need one more wicket before they are into the bowling all-rounders and England are still 69 runs behind.

India vs England live score, ENG 78-6: EDGED AND FOUR! Just wide of first slip! Flatter ball outside off, Lawrence goes hard at that and looks to cut but it takes the outside edge and flies past first slip and into the third man fence.

India vs England live score, ENG 65-6: OUT! Ashwin gets his third wicket and it is the dangerous Joe Root. Ashwin gets one to strike him plumb in front of the stumps and the umpire raises his finger. Root reviews but three reds means he has to walk.

India vs England live score, ENG 65-5: OUT! Pope and Root had been leading an admirable fightback but the stand has now been broken thanks to some brilliance from Pant behind the stumps. Pope charges Axar and misses, but the bounce makes it a difficult collect for Pant who does so and completes a tough stumping.

India vs England live score, ENG 46-4: DRINKS! All India so far! They have got 4 and have strenghtened their position in this game even more. England on the other hand, need a big stand. They will be relying on Root and hope Pope can give him able support. Is there a fightback in store?

Stokes' poor run of form with the bat continues.

Ben Stokes' batting average in this series, 25.37, is his lowest for a Test series (min 2 matches) since India visited England in 2018. He's averaged less in only four Test series where he's played at least twice. #INDvENg

India vs England live score, ENG 30-4: OUT! England are four down and Stokes is the one who has to depart. He sweeps hard but gives a simple catch to Kohli who is close by.

India vs England live score, ENG 20-3: OUT! Sibley is out in the most freakish way possible! He plays a sweep shot and the ball hits Gill and the ball lobs into the air and Pant takes a simple catch. 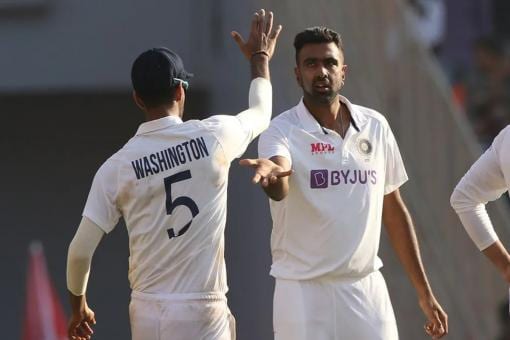 The star of the day, Rishabh Pant is caught down for a chat! Pant tells that the only thing running on his mind was building a stand with Rohit. Says after assessing the pitch, he played his shots. Tells that he understood that he will have to respect the good ball. Feels he knew the bad balls will come and that’s when he will score his runs. Tells that he likes to play according to the situation. Says that the plan was to get to England’s score and then get a big lead. On the reverse sweep against Anderson, Pant says that it was a pre-meditated shot. Tells that he gets the license to go for the big shots but says that he assess the situation and goes for the shots. Ends by saying that his aim is to play and make the team win and if the crowd gets entertained because of him, he is happy doing that as well.

On a scorching hot day, credit must be given to Ben Stokes and Jimmy Anderson. The pair kept running and ran out of steam but kept going. England’s gamble to play a bowler short was looking like it was paying off but not to be. Bess struggled for rhythm and his lack of confidence was evident. That saw the burden increase on the pacers and Root had to shoulder a lot of responsibility. The two pacers did well. Veteran Anderson and Stokes both picked up two today while Leach too got a brace.

But then the tide changed, the momentum shifted, and the game turned on its head. Rishabh Pant and Washington Sundar joined hands, and both the young left-handers took on the England bowlers. While Sundar kept tiring the bowlers by playing a classic Test match knock. Pant, from the other end, was taking on the attack. The Delhi lad who has this knack of deciding a Test with his batting did the same. Pant scored a supreme century and Washington showed his mettle as well. The pair added 113, a stand that saw India take the lead not just on the scorecard but also in the larger context of the game. Pant’s majestic innings came to an end but Washington carried his merry way. He reached his fifty and with Axar they have also extended their team’s lead and tired the tourists out on a hot, hot day.

England started the day just how the doctor ordered. They kept things tight initially and managed to pick wickets at regular intervals. At 80/4 it looked like India was in trouble. That trouble seemed to have deepened when the well-set batter, Rohit Sharma departed for 49. Ashwin and Pant tried to steady the ship but the off-spinner did not last long. At 146/6, still trailing by 59 on a pitch where batting was not at all easy. It was England who were happy and smiling.

What a fantastic day of Test cricket. England won the first two sessions but a young southpaw from Delhi ensured that India don’t just win the final session but win it in such a way that the day belonged to the hosts. The day belonged to Rishabh Pant and all headlines will have his name and rightfully so but Washington Sundar has played a superb inning himself and has finished the day unbeaten on 60!