Back to News18
Home » Cricket Home » News » India vs England: Return of Crowds a Welcome Sight But Lack of Social Distancing & Masks Leaves Room for Concern

India vs England: Return of Crowds a Welcome Sight But Lack of Social Distancing & Masks Leaves Room for Concern

While the presence of a healthy crowd at the MA Chidambaram Stadium was one that was something to welcome, there were also a few eyebrows raised. 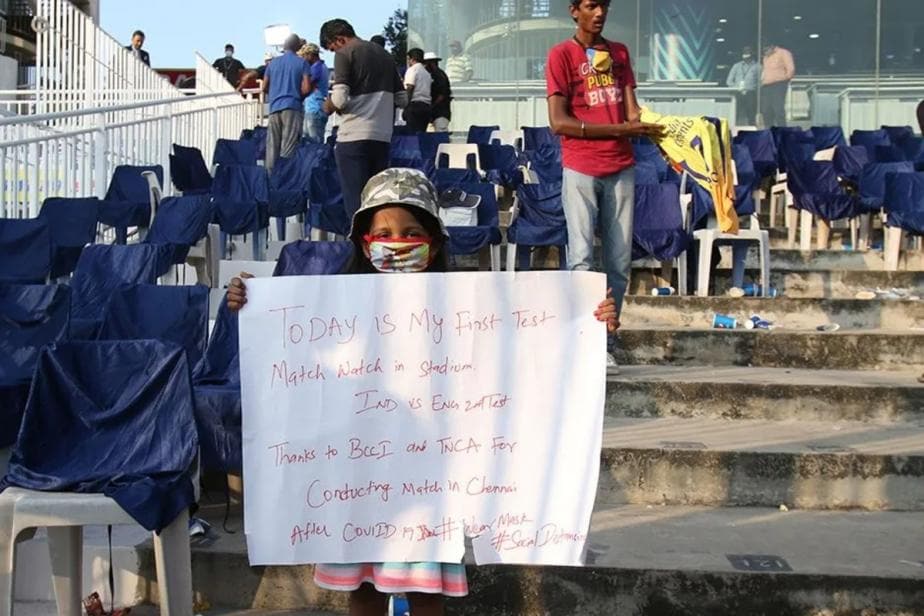 Stuart Broad has learnt a few tricks about playing in India. On the first day of the second Test, with a crowd in the range of 12,000 in attendance —15,000 tickets had been made available to the public — Broad channeled his inner Virat Kohli when the Indian captain came out to bat. Fielding in front of a vocal section of the crowd, at long-on, Broad had his arms spread out, and waved them in the air, as the crowd chanted "Kohli! Kohli! Kohli!" encouraging to get even more vocal. When a ball took the top off the surface of the pitch, gripped and bounced and turned a bit extra, Broad turned and faced the crowd and mimicked an off spinner’s action, tracing the trajectory the ball had taken after it left the hand.

But, the crowd had little chance to get involved in the moment, or give it back to Broad, even in a good-natured manner, as Kohli lasted all of five balls, bowled by a Moeen Ali special that had all the elements of flight, dip and turn that you would expect from a classic off spinner’s dismissal. So shocked was Kohli that he stood rooted to his crease, not sure what had just happened, and the on field umpires went to the third umpire to confirm that the bails had indeed been dislodged by the ball, and not a ricochet off the wicketkeeper’s gloves.

The crowd, which had been waiting for their Kohli moment, a desperate to see more from the biggest star in the Indian team, were stunned into silence.

Fortunately for them, however, the tempo of play was not like the start of the first Test, where it was England all the way. Rohit Sharma was on top of his game from the outset and it did appear at times as though he was batting on a different pitch to his team-mates. The boundaries kept flowing, and milestone after milestone was ticked off. For the fourth time in as many home innings, Rohit capitalised on a start. His previous three scores after reaching 50 in India were 176, 127 and 212. To this he added 161, ensuring that India were well set up with 300 on the board at the end of the first day, even if six wickets had been lost.

At the end of the day’s play, Rohit acknowledged the role the crowd had played in giving the proceedings a sense of occasion. While he point blank turned down the chance to rate this innings, saying only that each knock came under different pressures, Rohit welcomed the opportunity to acknowledge the presence of fans.

“It was great fun to have them at the ground. It is something that livens up the whole atmosphere in the ground,” said Rohit. “The intensity was low from both sides in the first game. It has been a long time since they have come and watched a game in India. I’m happy that they enjoyed some good cricket today.”

Chief among those fans, certainly the one best known in these parts is Saravanan Hari, the thickset gentleman who appears on television screens painted in the yellow of the Chennai Super Kings. Seated in the Lower C Stand in Chepauk on the day, Saravanan attracted as much attention from fellow cricket watchers as the action out in the middle. Every time a boundary was hit, he led the applause and the cheering, happy to be back in the stands at his home ground.

But, while the presence of a healthy crowd at the MA Chidambaram Stadium was one that was something to welcome, there were also a few eyebrows raised. This was mostly because of the lack of maintenance of social distancing in most parts, perhaps understandable given how packed the seating is at Indian grounds, but also because so few people kept their masks on. As pictures of cheering fans were beamed around the world on television, questions were rained about just how this was considered acceptable.

This seemed particularly out of place given that the last Test was played at the same venue, just four days ago, with no crowds being allowed in. What had changed between now and then, was the question. On the day, though there were no answers, just fingers crossed that all would be well, and that the return of crowds to cricket in India was a permanent one.