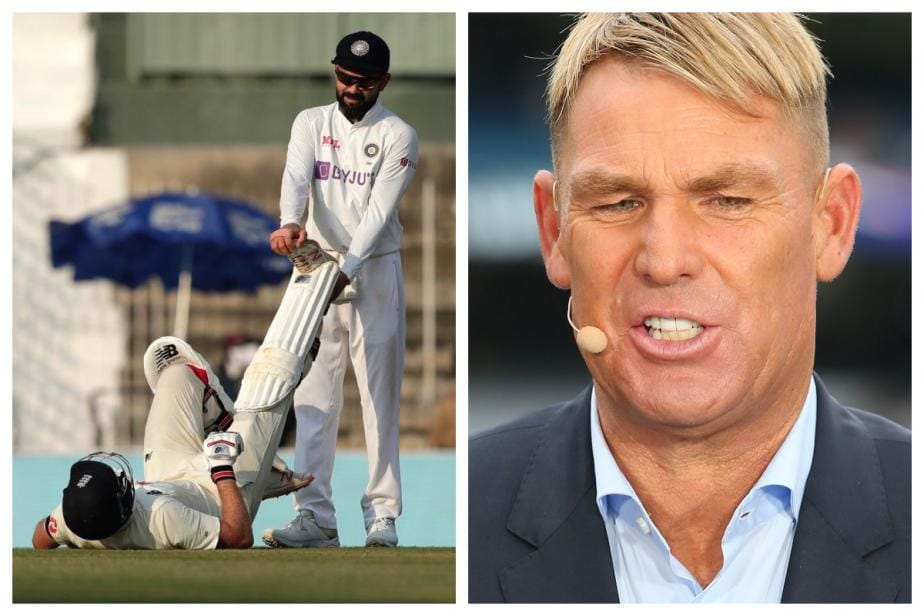 The India captain reached out and helped Root by stretching his right leg as he faced severe cramps after executing a perfect sweep shot.

Former Australia cricketer Shane Warne has lauded India skipper Virat Kohli for his 'Spirit of Cricket' gesture towards England captain Joe Root in the opening Testunderway at the MA Chidambaram Stadium in Chennai. A moment of sportsperson spirit was caught on camera towards the conclusion of the Friday match. The camaraderie between Kohli and his opposition Root was on display on Day 1. Team India captain walked towards Root, who was cramping a few minutes before the final minutes of the play on day one.

Root, who was finally dismissed on the second day of the 1st Test, went down on the field with a cramp after smashing a six from R Ashwin’s last delivery of the 87th over. Although the England physio was walking to the crease to help Root, Kohli decided to be helpful in the situation before the medical aid arrived. The India captain reached out and helped Root by stretching his right leg. This heartwarming gesture got noticed by former Aussie spinner, Shane Warne, who tweeted, "Love this !!!! Well done @imVkohli and congrats to @root66 on another wonderful innings #SpiritOfCricket."

Love this !!!! Well done @imVkohli and congrats to @root66 on another wonderful innings #SpiritOfCricket ❤️ pic.twitter.com/hUBFZfoZ9X

On Saturday, Root scored a double century and became the first batsman in Test history to register his highest score playing in his 100th Test match. He notched up his fifth double hundred and his third as a captain. To achieve this feat, he surpassed the record of former Pakistan skipper Inzamam-ul-Haq. After winning the toss and opting to bat, Root stitched a 200-run stand with opener Dom Sibley to dominate India's bowling attack

In the ongoing Test game, England restricted hosts to 257/6 on the third day as India trailed England by 241 runs. Root was the top-scorer for The Three Lions as he played a knock of 218. Jasprit Bumrah and Ravichandran Ashwin finished with three wickets each.