India have registered 7 hundreds – only New Zealand match them on this count but in 179 more batting innings. Again, no team has registered more fifties – 78. Pakistan have the same number but in 31 more matches. Rohit, Dhawan and Kohli amongst the highest scorers in the format Rohit has scored 4 international hundreds in T20 cricket – the maximum by any player in the history of the format. Only two other Indian batsmen have T20I hundreds – Rahul (2) and Raina (1). Kohli has registered the maximum number of 50s in the format – 19. 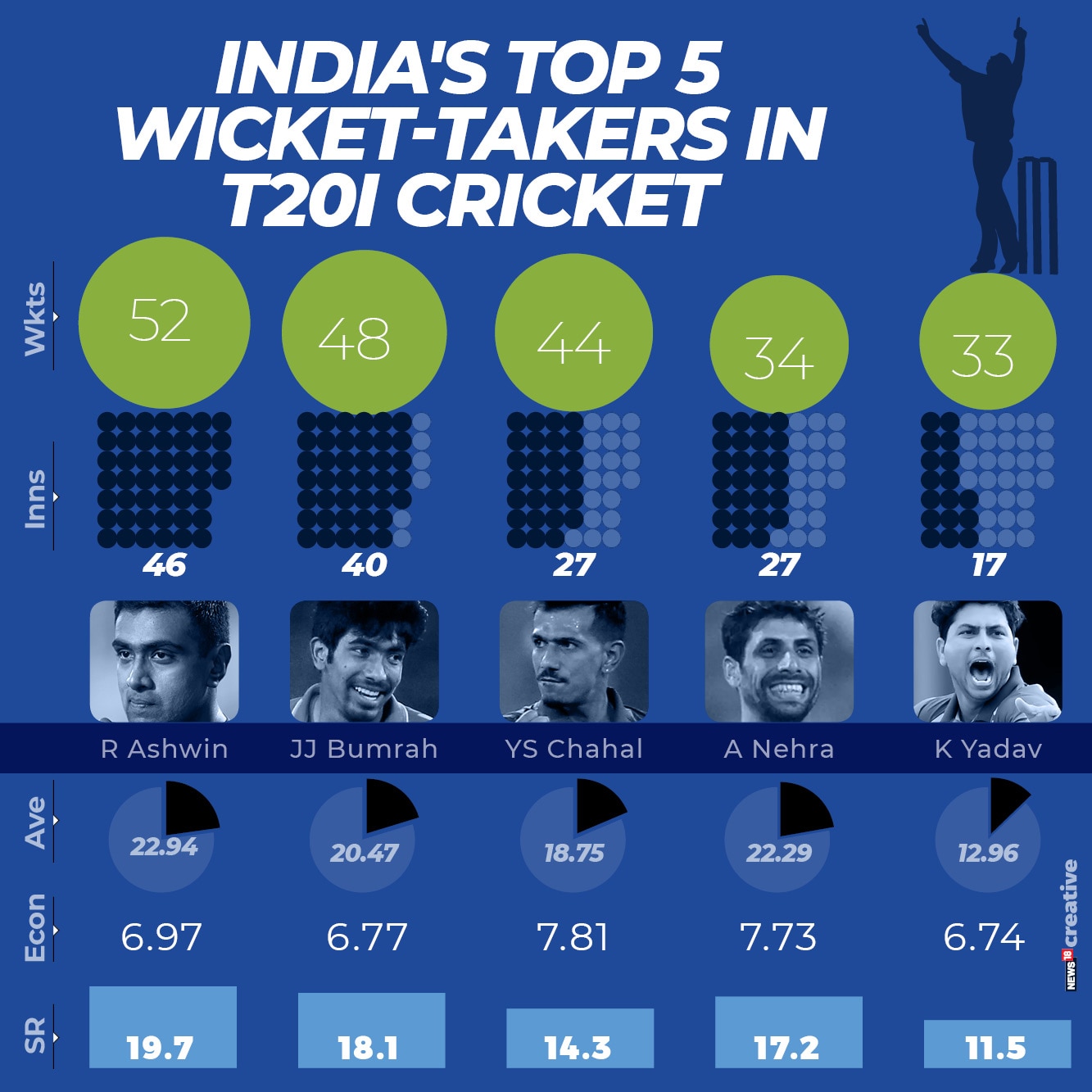 Kuldeep Yadav has the best strike rate in the history of T20I cricket (min. 30 wickets). He picks a wicket less than every 2 overs – that is a sensational record!

His bowling average of 12.96 is also outstanding and the second-best in history only after Rashid Khan (12.40).

Interestingly, amongst pace bowlers, it was Ashish Nehra who had the best bowling strike rate for India. Bumrah, who has quickly jumped to Number two in the wickets column list for India, has the best bowling average amongst all Indian pacemen.

Chahal has three 4+ wickets in an innings – the maximum number for India.

For a minimum of 25 wickets, it was Harbhajan Singh who was the most restrictive bowler for India with an economy rate of 6.20. Amongst pace bowlers, Bhuvneshwar Kumar (6.73) has the best economy rate for India.

India won the inaugural World T20 in South Africa in 2007, were runners-up in Bangladesh in 2014 and were the semi-finalists in the last edition in India in 2016.

Kohli’s numbers in World T20s are quite staggering. He has scored them at an average of 86.33 – not only is this the highest average (min. 10 innings) by far but there is a difference of almost 32 runs per dismissal between him and the batsman with the second-best average – Michael Hussey (54.62).

Series-wise, India have won 9 of the 12 series they have played in this time-period. They have drawn 2 and lost just one solitary series to the West Indies in August, 2016 – that is how good they have been of late in the format.

In fact, they won 7 consecutive series till the 1-1 draw in Australia at the end of 2018. These include wins in South Africa and England. 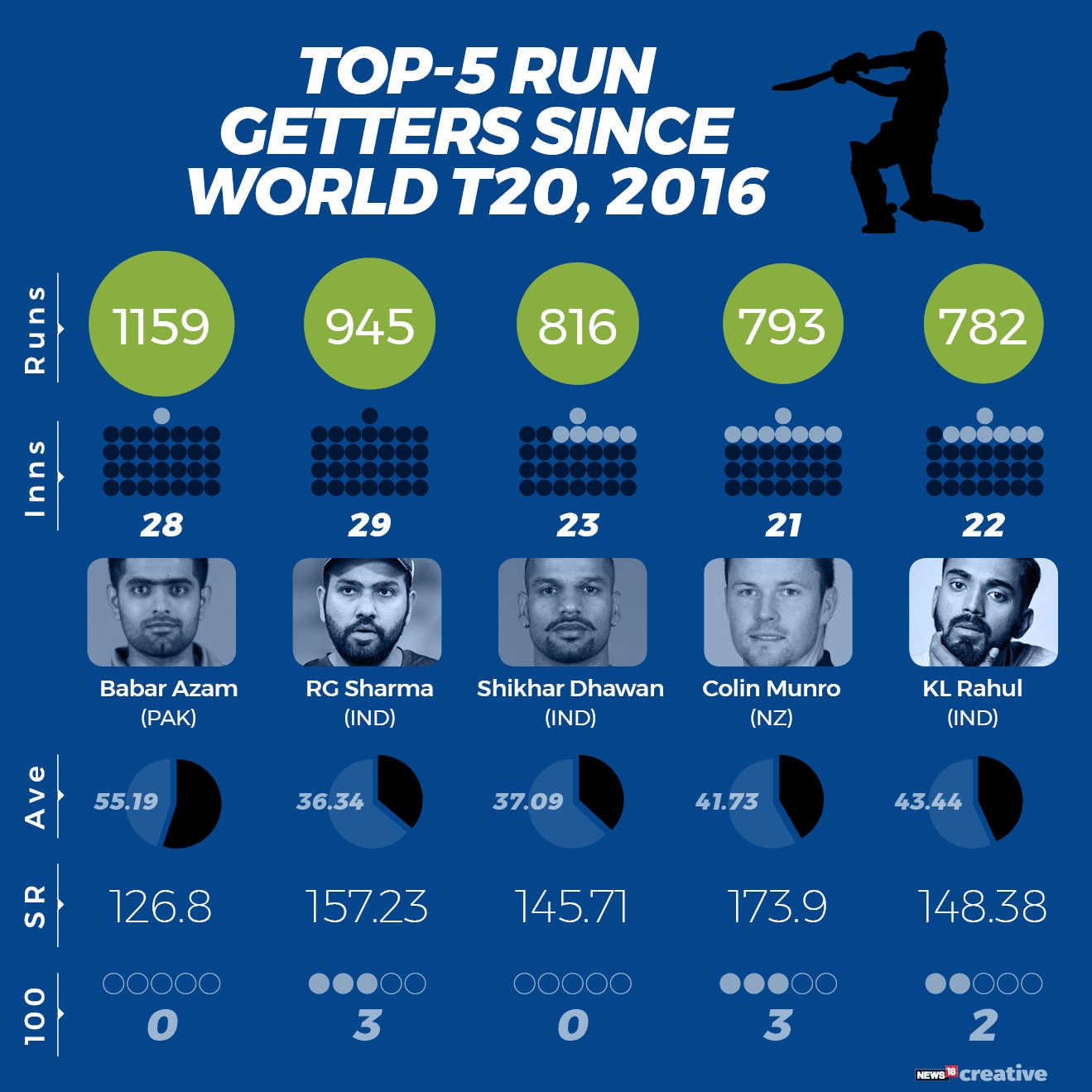 As many as three Indian batsmen are amongst the five highest run-getters in the format in this period. If we take a product of average and strike rate, it is India’s top 4 which come out atop. India’s top-4 have also registered the maximum 100s (5) and fifties ( 25) during this period.

Rohit, Dhawan and Rahul have been in exceptional form in the last two to three years. Not only have they scored big but have also done so at a rapid rate.

It is not surprising then that India have registered 180-plus on 13 occasions in this period – only Pakistan match them on this count.

Chahal has been the second-highest wicket taker in the world in this period (44 wickets in 27 innings) after Rashid Khan (45 in 21). He has conceded 18.75 runs apiece and has an excellent strike rate of 14.3.

His numbers for India are only second to Kuldeep Yadav – who has picked 33 wickets in 17 innings at an exceptional average and strike rate of 12.96 and 11.5 in this period – the best figures again after Rashid Khan in this period.

Bumrah has been the pick of the Indian pace bowlers with an aggregate of 29 wickets in 24 innings. His economy rate of 6.85 runs per over makes him the most restrictive pace bowler in the world (min. 20 wickets) in this period.

Highest Partnership: Rohit Sharma and Lokesh Rahul (165) vs Sri Lanka in Indore in 2017

Best Bowling Figures in a Match: Yuzvendra Chahal (6-25) vs England in Bengaluru in 2017