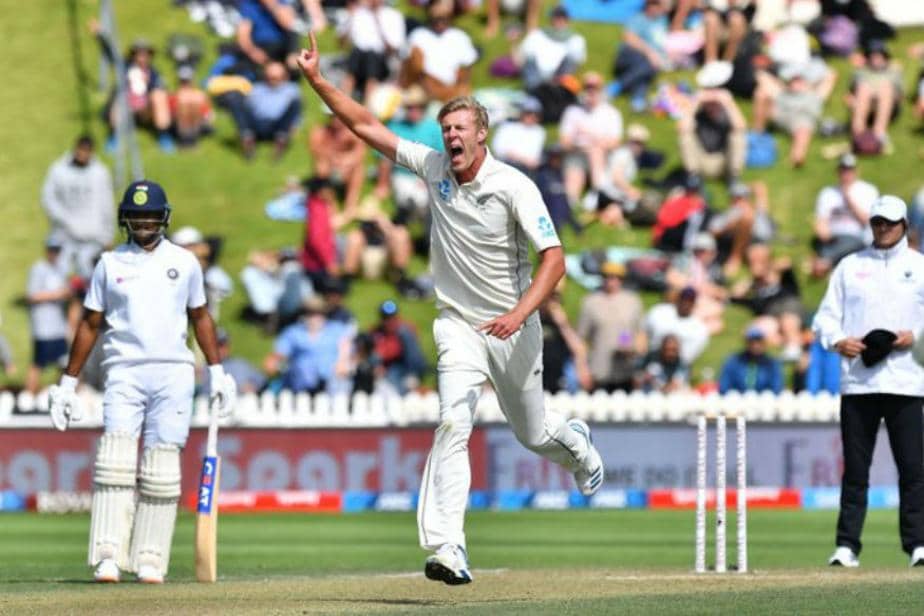 Shaw was in sparkling form at the top of the innings with 54 off 64 deliveries while Pujara and Vihari played more patient roles.

After a fantastic debut in the first Test, Kyle Jamieson continued his rich vein of form as he grabbed a five-wicket haul on Saturday to put New Zealand in the box seat on day one of the second Test against India in Christchurch.

New Zealand, who won the crucial toss with an inviting green pitch on offer, were 63 without loss when stumps were drawn after having skittled India out for 242.

Jamieson, who has his sights on becoming established as an all-rounder, grabbed the headlines on debut with four wickets and a sparking 44 runs in New Zealanda's 10-wicket first Test victory in Wellington.

He backed that up in Christchurch with five for 45 to blunt a promising start by India in the second Test.

Prithvi Shaw, Cheteshwar Pujara and Hanuma Vihari all collected half centuries for India to show that the green wicket was not as threatening as expected.

Shaw was in sparkling form at the top of the innings with 54 off 64 deliveries while Pujara and Vihari played more patient roles.

Pujara faced 140 balls for his 54 while Vihari's 55 took 70 deliveries but with most of his runs coming in a late flurry of boundaries.

Captain Virat Kohli again fell cheaply and there was little life in the tail.

The last six wickets produced only 48 runs with 26 of them from Mohammed Shami and Jasprit Bumrah for the final wicket.

After Mayank Agarwal fell early, Shaw and Pujara put on 50 for the second wicket before the 2.03-metre (6ft 8in) Jamieson struck for the first time when he found the edge of Shaw's bat and a leaping Latham snared the catch at second slip.

Enter Kohli and a chance for the master batsman to play a captain's knock as India battle to save themselves from a whitewash in the two-Test series.

Instead his disappointing tour continued and he was out for three when a Tim Southee outswinger seamed back and trapped him lbw.

It followed scores of 19 and two in the first Test and from 10 innings across all three formats on tour against the Black Caps, Kohli has totalled only 204 runs.

Southee followed with the wicket of Ajinkya Rahane for seven before Pujara and Vihari stabilised the innings in an 81-run stand for the fifth wicket.

Wagner bagged Vihari with the last ball before tea and Jamieson took Pujara soon after the resumption before racing through the lower order to remove Rishabh Pant (12), Ravindra Jadeja (nine) and Umesh Yadav (nought).